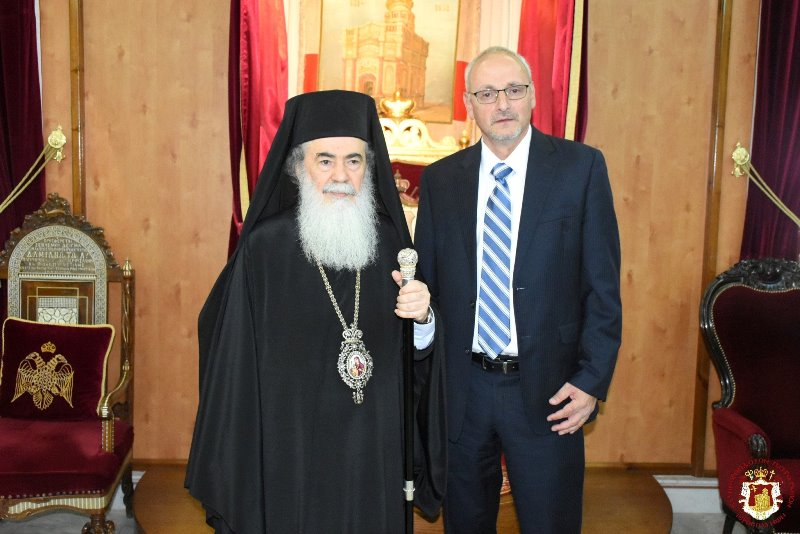 THE NEW AMBASSADOR OF ISRAEL IN GREECE VISITS THE PATRIARCHATE

On Wednesday, 7/20 July 2022, the new future Ambassador of Israel in Greece, Mr Noam Gatz, visited the Patriarchate, accompanied by Mrs Tani from the Ministry of Foreign Affairs of Israel.

H.H.B., our Father and Patriarch of Jerusalem Theophilos and Hagiotaphite Fathers received the new Ambassador and his companions.

During this visit, the Ambassador was informed by His Beatitude about the unbreakable bond between the Old and the New Testament, about the conflict between Hellenism and Judaism during the successors of Alexander the Great, and about the Church who has recognised the Holy Seven Maccabees as Saints, along with their mother Solomoni and their teacher Eleazar, and keeps their feast on 1st August annually.

There was also a conversation about the current cooperation between the Patriarchate and the Ministry of Interior of Israel to grant the residence visa for the members of the Patriarchate, the monks and nuns, and for the entry and exit via Ben Gurion Airport in Tel Aviv.

The Ambassador asked for information regarding the relations among the Orthodox Churches, and His Beatitude replied that they are in communion or cooperation with each other, as well as about the relationship of the Orthodox Church with the other Christian Churches, and received the reply that they all communicate with each other and cultivate the theological dialogue.

His Beatitude referred to the jurisdiction of the Patriarchate in the three Palestine states, extending as far as Qatar.

Finally, the Ambassador asked His Beatitude’s wishes for the success of his new mission.