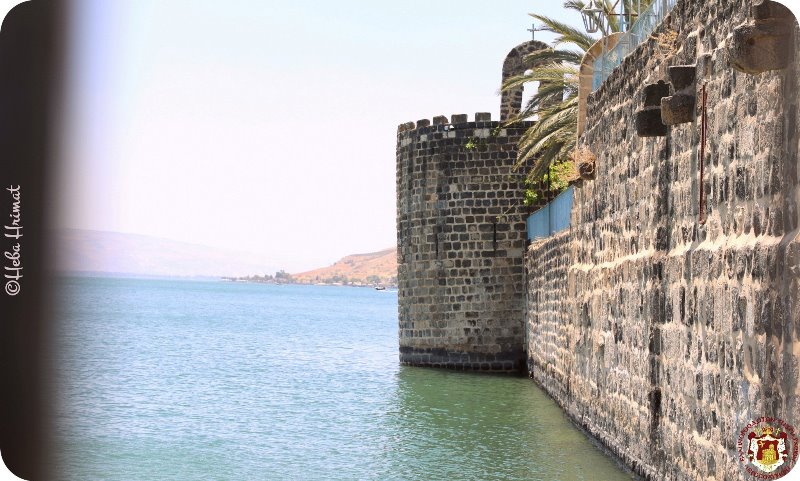 On Wednesday, 30 June/ 13 July 2022, the Patriarchate celebrated the feast of the Synaxis of the Holy Glorious twelve Apostles at the Holy Church dedicated to them on the west shore of the sea of Tiberias, at the centre of the town of Tiberias.

On this feast the Church gathers, namely, it keeps the “Synaxis” of its faithful to honour the twelve Apostles to whom the Lord sent His Holy Spirit, and by whom He “kept the whole world into their net”.

For this feast, Vespers was held on Tuesday afternoon and the Divine Liturgy on Wednesday morning was officiated by H.H.B. our Father and Patriarch of Jerusalem Theophilos, along with their Eminences, Metropolitan Kyriakos of Nazareth, Archbishop Aristarchos of Constantina, Hagiotaphite Hieromonks, among whom the Archimandrite Parthenios and Priests from the Metropolis of Nazareth. The chanting was delivered by the Hegoumen of Acre, Archimandrite Philotheos in Greek and Arabic, as the service was attended by Arab-speaking and Russian faithful.

His Beatitude delivered the following Sermon:

“O Disciples of the Saviour, you saved the world; for you travelled all over it and illumined peoples, and by your teachings, you burned up the delusion of the idols like kindling, and you dragged up the Gentiles from the deep of ignorance to divine knowledge. And now, intercede with Christ, that He be merciful to us on Judgment Day” (Matins, Praises, Glory), the hymnographer of the Church Cosmas the Monk proclaims.

The grace of the glorious and all-lauded twelve Apostles has gathered us all in the Monastery dedicated to them, by the seaside, namely at the sea of Tiberias, where Jesus revealed Himself to His Disciples after His resurrection (ref. John 21:1-13), to celebrate their Synaxis.

The sacred day of the Twelve Apostles is an extension of the commemoration of the Chiefs of the Apostles Peter and Paul, whom we celebrated yesterday at the seaside town of Capernaum.

Referring to the choosing of the Twelve Apostles, the Evangelist Luke says: “And it came to pass in those days, that he went out into a mountain to pray, and continued all night in prayer to God. And when it was day, he called unto him his disciples: and of them, he chose twelve, whom also he named apostles” (Luke 6:12-13).

Interpreting these words of the Gospel, Saint Cyril of Alexandria says: “Having spent the night in prayer, our Lord conversed with the Father and God in heaven in an unspeakable and incomprehensible [to us] manner and gave Himself as a type of salvation, He taught the correct and pure way of prayer and made them mystics of the universe”.

Indeed, the Holy Apostles became mystics, meaning teachers, and preachers of the mystery of the Divine Providence as the Evangelist Matthew witnesses. “And Jesus came and spake unto them, saying, All power is given unto me in heaven and in the earth. Go ye therefore, and teach all nations, baptizing them in the name of the Father, and of the Son, and of the Holy Ghost: Teaching them to observe all things whatsoever I have commanded you: and, lo, I am with you always, even unto the end of the world. Amen” (Matt. 28:18-20).

Christ’s Discipled did not do anything by themselves, namely with their own thinking, but everything that He gave to them as commandments. Therefore, Athanasios the Great says: “Jesus did not tell them simply to baptise, but He said they should teach first…so that faith would become correct from the knowledge and after faith, the completion should come with the baptism”.  And according to Saint Chrysostom, “He commanded to study about the doctrines and teach about the commandments”.

Noteworthy on this is the interpretation of Saint Gregory of Nyssa: “dividing the Christians’ manner of living between the moral part and the precision of the doctrines, He secures the redeeming doctrine with baptism, while He orders to manage our lives through the keeping of the commandments”.

In other words, the Apostles’ preaching is distinguished in two things regarding the Christian manner of living. On the one hand, the knowledge of the correct faith, namely the precision of the doctrines through baptism. On the other, to the application and keeping of the commandments of the Gospel of Christ.

Behold, therefore, why Saint Paul advises: “Therefore, brethren, stand fast, and hold the traditions which ye have been taught, whether by word, or our epistle” (2 Thess. 2:15). And to his disciple he says: “O Timothy, keep that which is committed to thy trust, avoiding profane and vain babblings, and oppositions of science falsely so called” (1 Timothy 6:20).

The tradition of the Church and of the Holy Apostles, my dear ones, is the source of the doctrines of our faith and of the ecclesiastical preaching of the spiritual and moral teaching, moreover of the Holy Bible, as Saint Maximus the Confessor says; “we have secured through the teaching in writing the doctrines and preaching of the Church, while we have accepted what has been passed over in secret through the tradition of the Apostles, and both have the same power toward the mystery of the Divine Providence”.

The contribution and the divine work of the Holy Apostles are owed to the power Jesus gave them on the one hand (ref. Matt. 10:1-8), and on the other, to the union of the gentiles and the Jews in the one Church of Christ. And this, because the Apostles and the prophets, being vessels of the Holy Spirit, became the foundation of the revealed in the world and redeeming sacred history as the Apostle Paul says very clearly: “But now in Christ Jesus ye who sometimes were far off are made nigh by the blood of Christ… Now, therefore, ye are no more strangers and foreigners, but fellow-citizens with the saints, and of the household of God; And are built upon the foundation of the apostles and prophets, Jesus Christ himself being the chief cornerstone” (Eph. 2:13-20).

The whole institution of the Church is built upon the foundation of the Apostles, as phrased in our Creed, and according to which the Holy Church of Christ is called “Apostolic”. The unity of the various local brotherly Orthodox Churches is established on the Apostolic character of the Church. And this, because as the psalmist says, through the Apostles, “The Lord hath made known his salvation: his righteousness hath he openly shewed in the sight of the heathen” (Psalm 98:2).

We, who celebrate the Holy Apostles, along with the Mother of God and our Saviour Jesus Christ, let us entreat them to pray to the Son and God for the peace of the world, the salvation of our souls and the unity of the One, Holy, Catholic and Apostolic Church. Amen. Many happy returns!”

The Divine Liturgy was followed by a reception and a meal by the good Head of the Monastery, Hegoumen Archimandrite Parthenios.