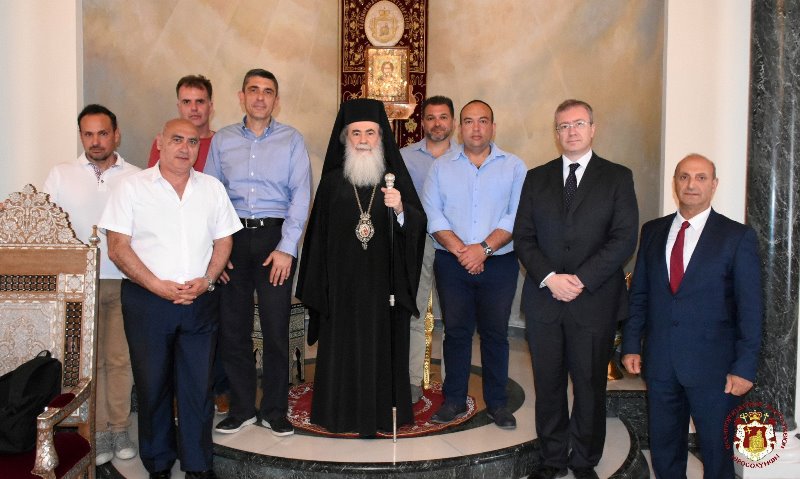 EIGHTY-MEMBER GROUP OF THE GREEK NAVY VISITS THE PATRIARCHATE

On Friday afternoon, May 14/27, 2022, a group of eighty members of the Greek Navy visited the Patriarchate, accompanied by the Consul General of Greece in Jerusalem Mr Evangelos Vlioras and the Honorary Consul of Greece in Haifa Mr Constantinos Zinovios.

The group was received by H.H.B. our Father and Patriarch of Jerusalem Theophilos and Hagiotaphite Fathers.

In His talk to the group, His Beatitude said that they have visited the holiest part of the earth because it has received the blood of our Lord Jesus Christ and also received Himself in the All-holy Sepulchre, which was proven to be both new and empty, as Christ has risen from the dead.

Jerusalem is the spiritual capital of the whole world due to these two events, the Crucifixion and the Resurrection of Christ.

His Beatitude wished the members of this Naval Mission to have the power of the Master Christ and the Grace of the Holy Sepulchre to defend our country with renewed strength.

For this visit, they offered His Beatitude a coat of arms of the Navy, while the latter offered them blessings from Jerusalem and His blessing to visit the Holy Sepulchre and then attend a meal that the Patriarchate had prepared for them.