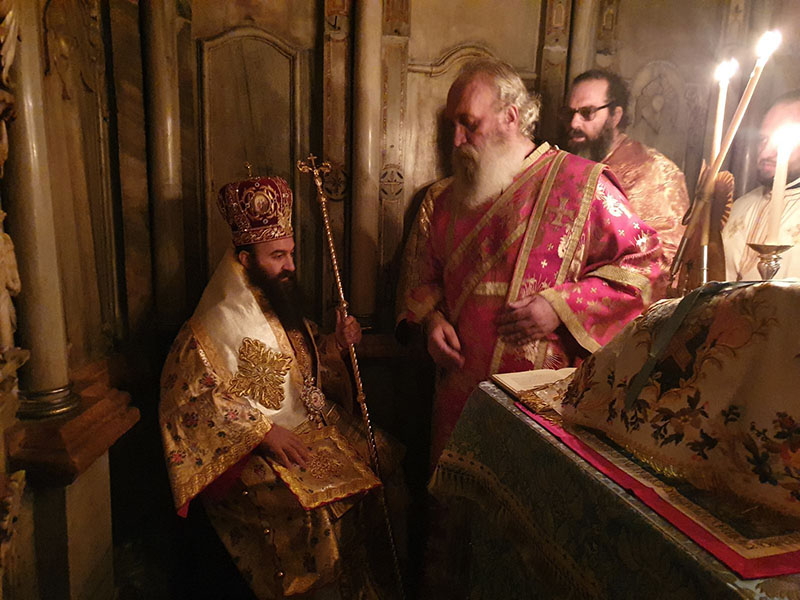 ORDINATION OF HAGIOTAPHITE PRIEST AT THE PATRIARCHATE

During the Night Vigil at the All-holy and Life-giving Sepulchre on 31 January/13 February 2022, Sunday of the Publican and the Pharisee, the Hagiotaphite Hieromonk Anastasios Kirmitsakis, who serves at the Holy Sepulchre was ordained a Priest.

The ordination was held by Geronda Sacristan His Eminence Archbishop Isidoros of Hierapolis, preparing the ordained with the following Fatherly words:

Blessed is the time that His Beatitude, our Father and Patriarch of Jerusalem Theophilos has chosen to promote you to the second degree of Priesthood. Your ordination to Priest coincides with the beginning of the most important period of our Church; the preparation for the luminous Resurrection of our Saviour Jesus Christ.

There, then, “the arena of the virtues” is being opened before you. You are given the chance to renounce the works of darkness, which are the worldly cares, the confusion of this vein world and be clad in the weapons of light, that is, to be spiritually prepared in order to see the Holy Light of the Resurrection, which stems from the same Holy Place, the All-holy and Life-giving Tomb of our Lord, where in a short while, the Holy Spirit will come down to alter you once more and make you a vessel of His choice.

“Behold a well-anticipated time, behold, a time of repentance”. And my mediocrity will add: Behold the Most Holy Place, behold the centre of salvation. What honour did the Divine Grace reserve for you, after a long journey and wandering in the cosmic paths and after it has removed you from the “broad way, that leadeth to destruction” (Matt. 7:13), leading you to the “narrow way, which leadeth unto life” (Matt. 7:14).

God led your footsteps when you first came to the Church of the Holy Sepulchre as a pilgrim, and the spark of God’s love was kindled in you. You were not content with only the pilgrimage, which millions of pilgrims take for centuries.

Like another Paul, the so-called ‘simple’, you left your wife and children behind and went away to save your life. And while in the case of Saint Paul the ‘simple’, his wife and daughters lived an irreverent life, and their father’s desire for the true life in Christ did not touch them, your family on the contrary, not only was benefited by your decision but also followed your example. A living example is standing by your side, your son in the flesh, who despite his young age was not impressed by the sirens of the world, but chose to follow you in the Holy Land.

As, therefore, by God’s help you have escaped the traps set by the devil on your left, you stand before us today, waiting to enter the interior of the purple curtain.

At this very point, I want to draw your attention, because the danger that awaits you is much greater and the temptations are much more indistinguishable, since the devil has now failed to throw you into the temptations from the left side, he is now preparing other temptations, which will come to you from the right side. You will be besieged by thoughts of Pride.

You will think that you are superior to other priests, who serve in other parts of the world. The honour and respect that will be given to you by the pious pilgrims can very easily deceive you and make you think that you have already reached the measures of holiness and that you are the centre of the world. The admiration and the flattering words, which are usually addressed by the various visitors to all the members of the Hagiotaphite Brotherhood, will always be in your ears.

To protect you from these dangerous thoughts I will remind you of what our Lord said to His chosen people, the Jews, whom He had destined to be an integral part of the Divine Providence. He called this same chosen people “generation of vipers”(Matt. 23:33), repeating the prophetic words of Saint John and Baptist when he urged his compatriots to “cultivate fruits worthy of repentance and not to think they will be saved because they have Abraham as their father, as God can even transform the stones and turn them into children of Abraham” (c.f. Luke 3:7).

So do not think that only your physical presence in the Holy Sepulchre of our Lord is enough to open the way to salvation. No human being, as long as he breathes, can take his salvation for granted. “The kingdom of heaven suffereth violence, and the violent take it by force” (Matt. 11:12).

Besides, you should not think that we are the protectors and guardians of the Holy Sepulchre and the other Holy Shrines as if our Lord and God were weak and had the need to be protected by us.

Lest it also happens to us what we see happening to his chosen people, who were called by God and prepared for the incarnation of the Lord and the Word of God, nevertheless its Pharisaic pride blinded him and he did not recognize the Saviour.

For this, as we have heard today the troparia of the Vespers and Matins, I will personally address you with the same advice. Take care with all your might to maintain a humble mind. You will achieve this initially with obedience, which you will demonstrate in the uncomplaining performance of your ministry. If the Devil sows thoughts like weeds in you that from now on your ministry should be commensurate with your age, then immediately repeat the omnipotent words of our Lord in the Sarantarion Mount “Get thee hence, Satan” (Matt. 4:10) and drive away the evil thoughts at once.

In particular, when the toil of the day closes your eyelids and brings you thoughts of exhaustion, you will think of the eternal rest in the bosom of Abraham that will have those who have conquered their flesh and overcame their nature, just as we see at the mural of our Holy Father Savvas the Sanctified at the refectory of his Holy Lavra to remind us that: “the one who conquered the flesh has conquered his nature. And the one who has conquered his nature has become above nature in all things”.

You should be like the newly-appeared and popular Saint Nectarios in forbearance, as he suffered harsh persecutions not by people of different religion and nation but by his own brethren, High Priests and Hieromonks; nevertheless, he never grouched and moreover, he never complained against anyone and endured the inhuman slander in patience and forbearance.

In complete renunciation of the world, you should have in front of you a living example, Saint Maximus Kausokalyvitis, and you should always be ready just like all the Agiotaphites to leave the position, in which you were comfortable and rested and adapt to any new situation.

Above all, honour the divine gift of Priesthood, which you are about to receive in a little while inside the Holy and Life-giving Tomb. Perform the Divine and Holy Liturgy in the fear of God and love without thoughts of vengeance against your brothers. Have the courage to apologize to your brothers when you make a mistake and to forgive those who have unwillingly caused you grief.

By keeping the above, you will not be far from that servant of the Gospel, who was deemed worthy to hear the Lord telling him: “Well done, thou good and faithful servant: thou hast been faithful over a few things, I will make thee ruler over many things: enter thou into the joy of thy Lord” (Matt. 25:21)

And now kneel and open your heart to receive the Divine Grace of the Holy and Ritual Spirit, Who will cure you of any spiritual illness and will make up for your deficiencies, to make you a worthy Minister, sanctifying us and being sanctified yourself. Amen.”

After the placing of the Archbishop’s hands on the head of the ordained, the invocation of the Divine Grace and the reading of the prayers, along with the giving of the liturgical vestments, the people exclaimed ‘Axios’ and the service was concluded with the phrase “this is the altering of the right hand of the Most High”.

The ordained and those who honoured him were offered a reception after the service by Geronda Sacristan at his office.

According to the order, the ordained paid his respects and received His Beatitude’s blessing on Monday 1/14 February 2022.

His Beatitude also blessed the monastic cassock of novice George Kirmitsakis, the son of the newly ordained Priest.