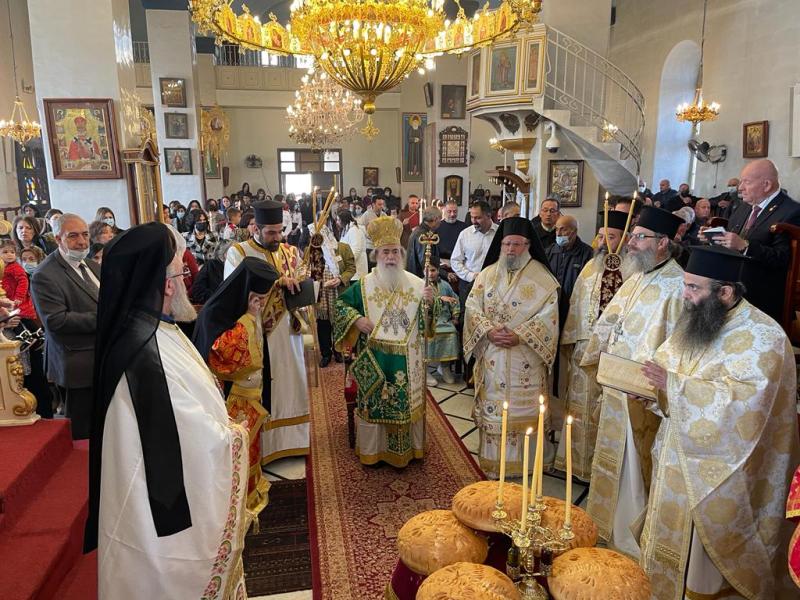 THE FEAST OF SAINT NIKOLAOS IN BEIT JALA

On Sunday, 6/19 December 2021, the feast of our Father among the Saints Nikolaos, Bishop of Myra in Lycia the wonder-worker was celebrated in the town of Beit Jala, near Bethlehem, and at the magnificent Church dedicated to him.

The Saint was celebrated as the patron Saint of this town, a Saint of the 4th century who was distinguished for his virtue and holiness, the helping of the poor, the orphans, the widows, those at sea, as “a rule of faith an icon of meekness and a teacher of temperance”. Saint Nikolaos participated in the 1st Ecumenical Synod in AD 325 and defended the doctrine of the one essence of the Son with the Father.

The Divine Liturgy in this town on the morning of the feast was officiated by H.H.B. our Father and Patriarch of Jerusalem Theophilos, who was festively welcomed by the Scouts. Co-celebrants to His Beatitude were their Eminences, the Archbishops Aristarchos of Constantina, and Philoumenos of Pella, the Hegoumen of Beit Jala, Archimandrite Ignatios, the Elder Kamarasis Archimandrite Nectarios, the ministering Priests of the parish, Fr Joseph, Fr Paul and Fr Elias and Hierodeacon Eulogios. The chanting was delivered by the Church choir amidst a great multitude of the Orthodox faithful of the town, and the presence of the Consul General of Greece in Jerusalem Mr Evangelos Vlioras.

“Lord, who shall abide in thy tabernacle? who shall dwell in thy holy hill? He that walketh uprightly, and worketh righteousness, and speaketh the truth in his heart” (Psalm 15:1-2), the psalmist proclaims.

Again and again, we thank the Holy Trinitarian God who deemed us worthy to meet in this Holy Church dedicated to Saint Nikolaos, the Archbishop of Myra in Lycia the wonder-worker, to celebrate his commemoration.

Saint Nikolaos was distinguished in the firmament of the Saints of the Church because, according to the psalmist he “walketh uprightly, and worketh righteousness, and speaketh the truth in his heart” (Psalm 15:2). This is moreover confirmed by his hymnographer who says: “A fervent protector art thou of the whole Church of Christ, most boldly destroying the ungodly teachings of all the impious heresies; and a rule of Orthodoxy wast thou to all men, interceding for all them that follow the teachings and godly admonitions” (Matins, Kathisma 5).

Indeed, our Father Nikolaos became a “rule of Orthodoxy”, namely a defender of the redeeming Orthodox faith. And this, because he paid heed to the advice of Saint James the Brother of God: “be ye doers of the word, and not hearers only” (James 1:22), as well as to the Lord’s word: “whosoever shall do and teach them, the same shall be called great in the kingdom of heaven” (Matt. 5:19).

In other words, these biblical words became a work and manner of living of the spiritual shepherd of the Church Nikolaos the wonder-worker, whose fame was heard all over the world. Therefore, he dwells in the dwelling place of the Lord and in His Holy Mountain, which is the Kingdom of Heaven.

Holiness means attachment to God, which means the keeping of God’s commandments as it was written about Moses and Aaron and Samuel: “Moses and Aaron among his priests, and Samuel among them that call upon his name; they called upon the Lord, and he answered them. He spake unto them in the cloudy pillar: they kept his testimonies and the ordinance that he gave them” (Psalm 99:6-7). The testimonies in this case are the divine commandments of God.

These testimonies, the divine commandments did the God-inspired Father of ours Nikolaos keep, that is why he was deemed worthy “to become partaker of His Holiness” (ref. Hebrews 12:10), namely of the purity according to Saint Chrysostom, and to the piety of God, according to Ecumenios. Because of this, his hymnographer asks for Saint Nikolaos’ help with the words: “O man of God and faithful servant, minister of the Lord and man of desires, vessel of election pillar and foundation of the Church and heir of the Kingdom, be not silent, but cry out in our behalf unto the Lord” (Great Vespers, Aposticha Glory).

The purity of heart, the hegemonic spirit and the virtues in Christ of the Bishop of Myra in Lycia made him not only preacher of the Orthodox faith against the abominable heresy of Arius, in the First Ecumenical Synod, which was convened during the reign of Constantine the Great in Nice of Asia Minor in AD 325 but also a wonder-worker, that’s why he also took this name. Moreover, Saint Nikolaos is especially known as the protector of the poor, the orphans, the widows and a guide of the blind.

For this reason, our Holy Father is projected as a prototype of a shepherd and teacher but also of Christ’s faith, praying and saying: “Cause me to know, O Lord, the way wherein I should walk, for unto Thee have I lifted up my soul” (Psalm 143:8); “Teach me to do Thy will, for Thou art my God” (Psalm 143:10). “On Thee was I cast from the womb; from my mother’s womb, Thou art my God” (Psalm 22:11). And he heard David saying: “if riches flow in, set not your hearts thereon” (Psalm 62:11). Moreover, the words of Wise Solomon: “Let not mercy and truth forsake thee” (Proverbs 3:3).

The love of our Father Nikolaos with all his mind, all his heart and all his soul to God led his footsteps to the Holy Land, the place of the Nativity, Crucifixion and the three-day burial and Resurrection of our Saviour Christ.

And we, my dear brethren, as the eye-witnesses of the All-holy Shrines of the mystery of the Divine Providence, are called to venerate at the Cave of Bethlehem the One Who was born from the pure flesh of the Ever-Virgin Mary, our Lord Jesus Christ, in the manner of the Church and not of the world, spiritually and not materially, “Setting our affection on things above, not on things on the earth” (Col. 3:2), as Saint Paul advises. And as other Magi, let us offer Him (Christ who was born of the Holy Spirit) our gifts, namely the humility of our heart, the repentance and the forgiveness of one another, so that in pure heart, we may celebrate the metropolis of the feasts, praising God and saying “Glory to God in the highest and on earth peace, goodwill among men” (Luke 2:14). Many happy returns and blessed Christmas.”

After the Divine Liturgy, there was a reception, followed by a meal.

During the meal His Beatitude addressed those present as follows:

“Both in thy life and after death, O Holy Hierarch Nikolas, thou hast been glorified greatly by God with manifold wonders; for who hath ever but called out upon thy blest and holy name with all his faith, and not straightway been hearkened to, having found thee to be a fervent protector?” (Matins, Exapostilarion 2).

Honourable Mr President and respected members of the Ecclesiastical Committee,

The great patron Saint of your historic town of Beit Jala, Saint Nikolaos, Bishop of Myra in Lycia, has gathered all of us, both the clergy and the people to glorify the One who glorified him.

Today’s brilliant feast of Saint Nikolaos who visited your town during his pilgrimage in the place of the Nativity of our Lord Jesus Christ in the 4th century has special importance for the Church of Jerusalem and its congregation.

The Christian presence throughout the centuries and especially the presence of the Rum Orthodox in the Holy Land of Palestine is proven to be the salt of this land. And we say this because the Holy Church of Jerusalem and its reverend people testify with all their power, their unceasing historical course in the holy land from the time of the Saints Constantine and Helen the Equal to the Apostles until today.

The Rum Orthodox Patriarchate of Jerusalem, namely the Church of Jerusalem and all Palestine remains the cornerstone of the guarantee of the cultural, religious and national identity of the Christians living here, as Saint Paul says: “Now, therefore, ye are no more strangers and foreigners, but fellow citizens with the saints, and of the household of God; And are built upon the foundation of the apostles and prophets, Jesus Christ himself being the chief cornerstone” (Eph. 2:19-20).

Indeed, my dear brethren, we have Saint Nikolaos as our fellow citizen and protector, that is why the hymnographer of the Church says: “who did not call upon your holy name in all faith and was not heard instantly, having found you as a fervent protector, O Nikolas?”

And Saint Nikolaos calls all of us to keep our faith whole and unblemished, the faith we have received from the Holy Apostles, hearkening to the urging of Saint Gregory the Theologian: “We theologize not in the manner of Aristotle [as philosophers] but as fishermen [in the manner of the fishermen Apostles]”.

For all these, let us raise our glass in a toast and wish everybody, many happy returns, peaceful, healthy, and merry Christmas. Moreover, let us thank from the depths of our heart the local authorities, and especially the Police and His Excellency and our dear President of the Palestinian State Mr Mahmoud Abas, wishing him health and longevity and governmental power. Once again, many happy returns!”