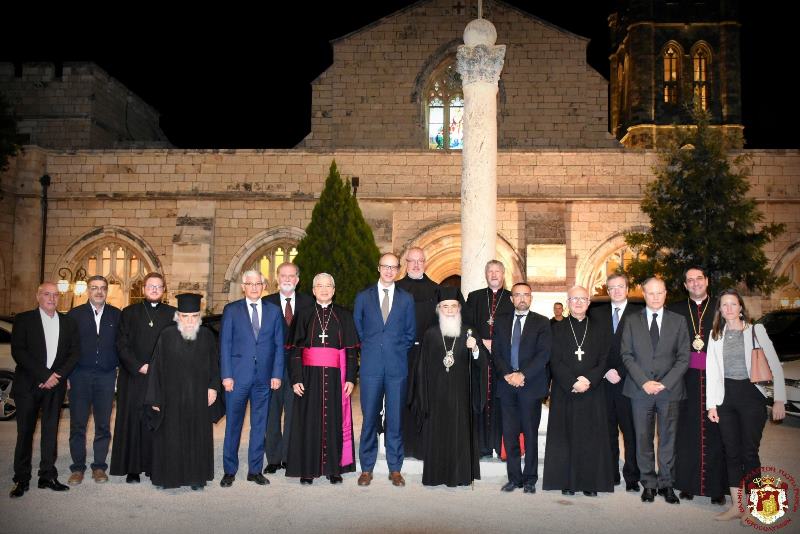 On Tuesday evening, 13/26 October 2021, the Heads of the Local Churches of Jerusalem as the Council of Churches hosted a dinner at the Anglican Church Restaurant in New East Jerusalem. The dinner was offered by the proposal and care of the Consul General of Greece in Jerusalem Mr Evangelos Vlioras with the hospitality of the Archbishop of the Anglican Church in Jerusalem Mr Husam Naoum. Honoured guests were the Consuls of the countries that are in cooperation with the Status Quo (CORPS CONSULAIRE DE JERUSALEM), from Greece, France, Great Britain, Spain, Italy, Belgium, Sweden, Turkey and the Vatican.

The honoured guests were welcomed at the dinner by the Anglican Bishop in Jerusalem Mr Husam Naoum.

During the meal H.H.B. our Father and Patriarch of Jerusalem Theophilos III addressed those present as follows:

Respected Members of the Diplomatic Corps,

We are grateful to be with you here in this distinguished gathering, and we wish to express our thanks to His Excellency the Consul General of Greece, Mr Vlioras, for his initiative in bringing us together, and to His Grace Archbishop Husam for his kind hospitality.

It is also our duty to ensure that the Christian character of Jerusalem and the Holy Land be maintained, for a Holy Land devoid of its Christian population would lose integrity. We have a further responsibility to accommodate and minister to the many thousands of pilgrims who, in normal times, come to the Holy City of Jerusalem and the Holy Land from around the world, many of them from the countries you represent. We are also called to the diakonia -the service- of the Holy Places, so that they may remain places of worship open to all without distinction.

As you are well aware, the Christian presence in Jerusalem and the Holy Land faces challenges unprecedented in our lifetime.

We live in a delicate balance that rests on ancient privileges and rights that history has confirmed, and there is now a concerted assault on these privileges and rights by radical groups who exercise a growing and considerable influence. Among these assaults are intrusion attempts on Church properties as well as proposed taxes on Church properties, moves which will diminish and cripple the ability of the Churches to carry out our charitable and educational mission. These matters are grave, and will require the attention of not the Churches alone, but also of the international community for their resolution.

We are appreciative that the Jerusalem diplomatic corps as well as the political leadership of many nations understand that religion plays an indispensable role in the life of our region, and we are pleased that the foreign ministries of so many countries recognise this role. There can be no sure path to a secure and peaceful future for all the people of the Holy Land and the Middle East unless we take this reality seriously.

The Churches do not wish to intrude into the proper role of diplomatic and political leadership. We are, however, ready and willing to be effective partners with you to do all in our power to find ways forward that ensure that the existing Status is respected. One should not underestimate that interfaith religious leadership has proven to be effective in opposing all forms of violence and in advancing peace. In this regard, we mention especially the countries of the European Union, which because of their long history in our region, and because of their involvement in the shaping of the Middle East, have a moral commitment to assist with this work. We remain committed to being in close contact with the European Union in their efforts to be peacemakers in our region.

Allow me to bring to your attention the establishment by the Churches of the NGO: ICoHS (the International Community of the Holy Sepulchre), which is seeking to be an advocate on behalf of the Christian communities of the Holy Land in global forums. A significant recent achievement of ICoHS is its new report on the positive impact of the Christian community in the coming days.

We wish to express our gratitude to each of you in your respective consular roles for the care and attention that you give to the serious concerns of our Christian communities. May God bless you as you carry out your duties on behalf of your own countries, and on behalf of all the people of our beloved City and Holy Land.