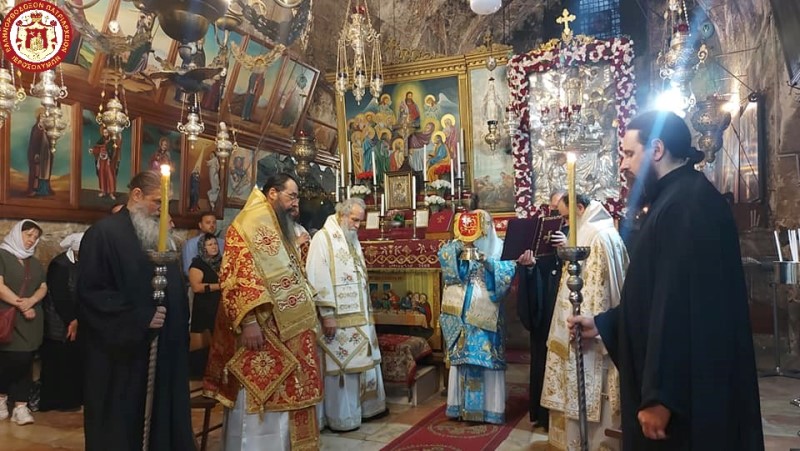 THE FEAST OF THE DORMITION OF THE THEOTOKOS AT THE PATRIARCHATE

On Saturday, 15/28 August 2021, the Patriarchate celebrated the feast of the Dormition of the Theotokos in Gethsemane at the Holy Church with the Tomb of the Mother of God.

On this feast, the Church reminds the faithful of our faith that the Theotokos conceived from the Holy Spirit and bore in the flesh our Lord Jesus Christ, she died and was buried in Gethsemane, but was translated by the hands of her Son in the heavens and her immaculate body was preserved. She stands on His right side, interceding unceasingly for the life and salvation of those who genuinely revere her as the Mother of God.

The Dormition of the Theotokos is characterized as ‘deathless’ by the Church, for this, it sings: “On thy deathless Dormition, all the heavens are jubilant, and the hosts of Angels exceedingly rejoice, clouds caught the Apostles high into the air; and although dispersed throughout the world, they were brought to stand in one choir before thine immaculate body” (Matins, praises, troparia 1,3). And Saint John of Damascus says about this, “oh, best departure, through which life in God is granted”.

For the feast of the Dormition, Vespers was officiated at the Theotokos’ Tomb on Friday afternoon by His Eminence Archbishop Demetrios of Lydda. The Divine Liturgy on Saturday morning was officiated by H.H.B. our Father and Patriarch of Jerusalem Theophilos with the co-celebration of their Eminences: Metropolitan Isychios of Kapitolias, the Archbishops, Demetrios of Lydda, Makarios of Qatar, and Metropolitan Joachim of Helenoupolis, along with Elder Kamarasis Archimandrite Nectarios, and the Archimandrites, Isidoros, Meletios and Dionysios, Priest Farah, Archdeacon Mark and Hierodeacon Eulogios. The chanting was delivered by Hierodeacon Simeon and the Patriarchal School Students, as the Service was attended by many local faithful Christians and the Consul General of Greece Mr Evangelos Vlioras.

“O strange wonder, great and marvellous! For the fount of life is laid within a sepulchre; a ladder to heaven’s heights doth the small grave become” (Vespers, Troparion 1), the Church hymnographer says.

By the Grace of God, we are here at the Tomb of Gethsemane, where the glorious body of our Most glorious Lady Theotokos and Ever-Virgin Mary was placed to honour her sacred metastasis (translation).

The Dormition of the Mother of God is indeed a wondrous mystery, as the hymnographer says: “Thou didst conceive and bear without the seed of man; and thou didst fall asleep, yet incorrupt in death, as wonder met together with great wonder, O Theotokos. How thou, who didst not know man, being pure yet didst nurse a babe; how the Mother of our God, clothed in death, yet doth breath froth myrrh. For this, we cry to thee with the Angel: Rejoice, O Full of Grace” (Matins, Kathisma 3).

Rejoice, O Full of Grace, we cry again with the Angel, because in Theotokos and Ever-Virgin Mary we praise the divine and marvellous plan of God’s Providence, the Incarnation of God the Word and our Saviour Jesus Christ.

The multitudes of the Angels in heaven and the people on earth bless the sacred Dormition of the Most Holy Virgin because she became Mother of the Creator of all things on the one hand, and the cause of our deification on the other, as the hymnographer says; “For she that is of David’s seed, she through whom we have been made Godlike, hath beyond all telling been translated with glory into the hands of her own Son and Master” (Vespers, Aposticha troparion 3).

“Oh, how the fount of life is translated into life through death! Oh, how the One who surpassed the limits of nature by giving birth now keeps the laws and succumbs to death while she has an immortal body. Because this body has to lay down mortality and be clothed in incorruptibility since the sovereign of nature did not refuse to suffer death”.

Theotokos Mary is called ‘the fount of life, because she became the Mother of God. And Christ is life, “I am the way, the truth and the life” (John 14:6), the Lord says. Saint John the Evangelist preaches that the cause and the fount of life is Christ, the Son and Word of God: “In him was life; and the life was the light of men” (John 1:4).

This means that due to the relation and union of the people with the old Adam, all his descendants die, so through their relation and union with the New Adam, the Resurrected Christ, all will be vivified, as Saint Paul preaches: “For as in Adam all die, even so in Christ shall all be made alive” (1 Cor. 15:22).

The Mother of God, who received the Holy Spirit and the power of the Highest overshadowed her (Luke 1:35), is the beginning of those who are brought back to life. For this reason, the Dormition of Theotokos goes beyond the meaning of natural death, as this is proven by her Tomb, which is preserved and venerated to this day, while “it is empty, without a body in it”. This event, which is beyond logic, the Dormition and translation of Theotokos and Ever-Virgin Mary is phrased by the hymnographer of the Church with the words: “The bounds of nature are overcome in thee, O Immaculate Virgin; for thy childbirth is virginal, and thy death is the espousal of life. O thou who after childbirth art virgin, and who after death art living, do thou, O Theotokos, ever save thine inheritance” (Matins, Ode 9, troparion 1).

The Most Holy and most blessed Theotokos Mary, the Mother of our God and Saviour Christ, has become the Mother of all people, and especially of the Christians, as the psalmist says: “Blessed is the [Christian] nation whose God is the Lord, and the people whom he hath chosen for his own inheritance” (Psalm 33:12).

And we, my dear brethren, being grateful for the endless benefits we have received from the Most Holy Theotokos, let us thank and entreat her to intercede to her Son and our God for the salvation of our souls.

May the grace of the Sacred Tomb of the Mother of God be with you all. Amen”.

After the Divine Liturgy, the Hegoumen of the Shrine Archbishop Dorotheos of Avela hosted a reception for the Patriarchal Entourage, the Consul General and others.