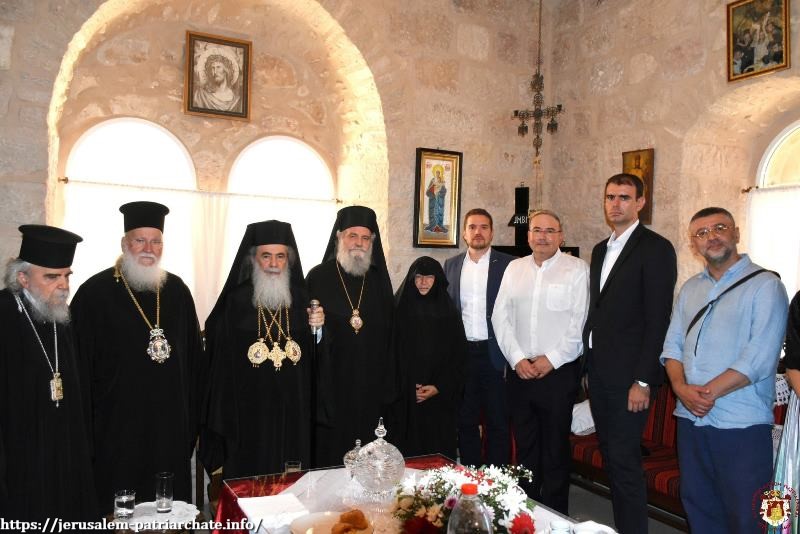 THE FEAST OF SAINT ONUPHRIUS AT THE PATRIARCHATE

On Friday 12/25 June 2021, the Patriarchate celebrated the feast of our Holy Father Onuphrius the Egyptian. The Church commemorates Saint Onuphrius from Egypt, who left the Coenobitic life, retreated in the desert for sixty years in strict ascesis and solitude, and became known to the Fathers when Saint Paphnutius found him.

The commemoration of the Saint was observed at the Holy Monastery dedicated to him, near the pool of Siloam, at the Potter’s field, which the Sanhedrin bought to bury the foreigners with the thirty pieces of silver that Judas returned to them (Matt. 27:1-11).

Among the many carved tombs in the Monastery lies the tomb of Saint Iouvenalios, the first Patriarch of Jerusalem (AD 451).

At the Holy Church of this Monastery, which is inside a carved rock, the Divine Liturgy was officiated by His Beatitude our Father and Patriarch of Jerusalem Theophilos, with the co-celebration of their Eminences, Metropolitans Kyriakos of Nazareth and Isychios of Kapitolias and Archbishop Aristarchos of Constantina, Elder Dragoman Archimandrite Mattheos, Archimandrite Makarios, Priest Yusef, Priest Elias and Priest Simeon, Archimandrite Isidoros, Archdeacon Mark and Hierodeacon Eulogios. The chanting was delivered by Mr Gotsopoulos and Archimandrite Eusevios, as the Service was attended by Monks, Nuns, the Consul General of Greece in Jerusalem Mr Evangelos Vlioras and many faithful Christians.

“For I am not ashamed of the gospel of Christ: for it is the power of God unto salvation to every one that believeth; to the Jew first, and also to the Greek. For therein is the righteousness of God revealed from faith to faith: as it is written, the just shall live by faith” (Romans 1:”16-17), Saint Paul says.

The strengthening grace of the Holy Spirit, Who came in the form of tongues of fire upon the Holy Apostles and Disciples of the Lord, has gathered us in this place of “the potter’s field”, which is also called “the field of blood” (Matt. 27:7-8), to celebrate the holy commemoration of our Righteous Father Onuphrius the Egyptian, at the Monastery dedicated to him, which was founded by the reverend Hagiotaphite Fathers.

Our Holy Father Onuphrius envied the manner of living of Saint John the Baptist and of Prophet Elijah, and of his fellow countryman Saint Anthony and retreated in the desert “where he lived for sixty years having seen no man” according to his synaxarist.

We hear Saint Paul saying: “And if a man also strives for masteries, yet is he not crowned, except he strives lawfully” (2 Tim 2:5). Again, referring to himself, Saint Paul says: “I have fought a good fight, I have finished my course, I have kept the faith. Henceforth there is laid up for me a crown of righteousness, which the Lord, the righteous judge, shall give me at that day: and not to me only, but unto all them also that love his appearing” (2 Tim 4:7-8).

Interpreting this word of Paul, Saint Chrysostom says: “the one who loves [the righteous Judge, the Lord’s] presence, does all things so that before the Second Coming, it will be done unto him to live within him the personal coming, according to Saint John the Evangelist: “if a man loves me, he will keep my words: and my Father will love him, and we will come unto him, and make our abode with him” (John 14:23).

Interpreting these words, Saint Cyril of Alexandria says: “Those whose mind is excessively enlightened by every kind of virtue, and thus they have become able to comprehend the divine and hidden mysteries, they will carry the torch of the Holy Spirit and behold the Lord with their mind’s eyes, as He has dwelled within them. Therefore, the knowledge of the Saints is not common to all, but it is something special and marvellous and differs greatly from the knowledge of the rest of the faithful”.

It is made clear, that the crown of righteousness that our Holy Father Onuphrius received is “the special and marvellous and very different knowledge”. And this knowledge is the one that enlightens the mind through the enlightening power of the Holy Spirit. Christ, Saint Cyril says, is the One who helps us in every word and manner. Firstly, Christ is the One who determines precisely who is the one that loves Him, and who is worthy to receive the power of the gift, namely the enlightening power of the Holy Spirit. The one who can “boast” (Romans 4:2) on the genuine relationship with Christ, through the keeping of His commandments.

Behold, therefore, my dear brethren, why our Holy Church of Christ honours and projects the commemoration of the Saints on the one hand, and calls every one of us through the Chief of the Apostles Peter’s mouth on the other, with the words: “But as he which hath called you is holy, so be ye holy in all manner of conversation; Because it is written; Be ye holy; for I am holy” (A Peter 1:15-16).

Through his strict ascetic life, our Holy Father Onuphrius managed to cleanse his heart according to the Lord’s command: “Blessed are the pure in heart, for they shall see God” (Matt. 5:8), and ascend the ladder of righteousness, sanctification and deification, becoming thus “partaker of the divine nature” (2 Peter 1:4).

Let us entreat our Lord Jesus Christ, who crowned our Holy Father Onuphrius with the crown of glory and righteousness and say along with the hymnographer: “We the multitudes of the monastics, honour thee, our teacher, Onuphrius; for through thee have we learned to walk the truly straight path. Blessed art thou, who hast laboured for Christ, and hast triumphed over the might of the enemy, O companion of the angels, and co-dweller of the righteous and the just. Together with them, [and the intercessions of the Most Blessed Theotokos and Ever-Virgin Mary] intercede with the Lord that He may have mercy on our souls” (Minaion, June 12, Vespers, Glory, tone plagal of fourth). Amen.”

After the dismissal of the Divine Liturgy, there was a memorial service at the owner’s grave and at that of Nun Seraphima and the prayer for the figs and grapes was read.

The Patriarchal Entourage was offered a reception by the good keeper and renovator of the Monastery Reverend Nun Paissia.