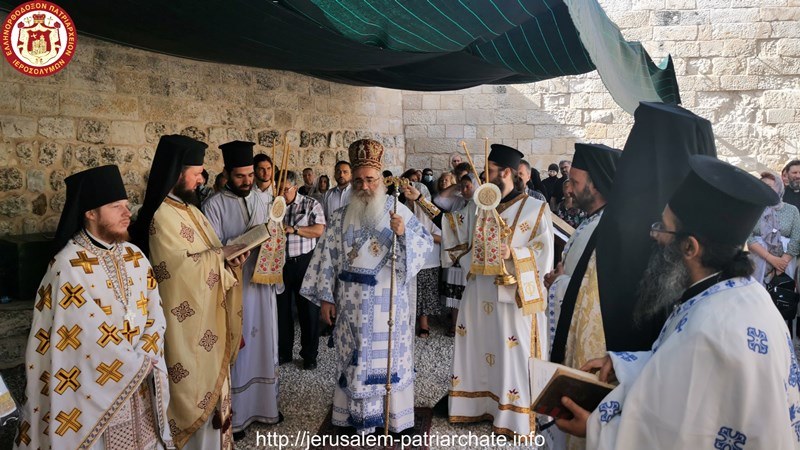 On Thursday, 28 May/10 June 2021, the Patriarchate celebrated the feast of the Ascension.

On this feast, the Church in thanksgiving and mixed joy with sadness, commemorates that our Lord Jesus Christ was ascended into the heavens, forty days after His Resurrection, and after many appearances to His Disciples. He was ascended into the heavens in glory and sat at the right side of the Father, deifying the human flesh He had assumed and He is to come again, to judge both the living and the dead.

The Church of Jerusalem celebrated the feast at the very place of the Ascension, on the Mount of Olives, with Great Vespers on Wednesday afternoon, which was led by His Eminence Archbishop Aristovoulos of Madaba, with the co-celebration of Hagiotaphite Hieromonks and Deacons, and Arab-speaking Priests, with the attendance of faithful from Jerusalem. The chanting was delivered by Mr Vasilios Gotsopoulos and the Patriarchal School Students on the right, and the choir of Saint James Cathedral under Mr Rimon Kamar on the left.

Vespers was followed by a Procession to the Monastery of the Men of Galilee, where His Beatitude was waiting to give His blessing according to the custom.

On the morning of the feast day, the bloodless Sacrifice was held at the same place, by His Eminence Archbishop Aristovoulos of Madaba, with the co-celebration of the Hagiotaphite Archimandrites; Kallistos, Dionysios and Stephanos, Arab-speaking Priests, and the Hierodeacons Eulogios and Simeon. The chanting was delivered by the choirs who also chanted at Vespers, and the Service was attended by the Consul General of Greece in Jerusalem Mr Evangelos Vlioras and many faithful Christians.

During the Divine Liturgy, H.H.B. our Father and Patriarch of Jerusalem and the Fathers-members of the Holy Synod came for veneration and then visited the adjacent to the Mosque Imam for reasons of goodwill. Then the Patriarchal Entourage visited Monk Achilios at the Holy Church of the Ascension opposite the Shrine, the Russian Monastery of the Ascension, where His Beatitude addressed the Head of the Monastery, Archimandrite Romanos as follows:

On this glorious Feast of the Ascension, which is the seal of the resurrection, we join in the words of the ancient hymn:

upon fulfilling your dispensation for our sake,

you ascended in glory, uniting the earthly with the heavenly.

You were never separate but remained inseparable,

and cried out to those who love you,

“I am with you and no one is against you.”

Here we understand the profound meaning of the Ascension, that, though our Lord Jesus Christ has gone to the Father to prepare a place for us, even so, we are still intimately connected with Him. As the hymn says so clearly, we are inseparable.

This unbreakable relationship with our Lord Jesus Christ, which finds its greatest expression in this life in the celebration of the Divine Liturgy, is the assurance of our final deification. This is the goal of every Christian, and this goal of complete union with God must be the daily focus of our spiritual lives. And this assurance is also our strength and consolation in times of suffering and difficulty.

Last year at this feast, we were not able to be with you. But this year our joy is full in our ability to be in this holy place on this day. And so we are reminded forcefully that the Holy Places, which the Divine Providence has placed under the guardianship and protection of the Patriarchate of Jerusalem are not just archaeological curiosities; on the contrary, they are living witnesses to our sacred history and are places of prayer, worship, and most especially places where were celebrate the Divine Eucharist.

It is in this action of the Divine Liturgy that the Mother Church of Jerusalem gathers all Orthodox faithful in the embrace of the true Orthodox ecumenical spirit. We are glad today to have with us the representatives from Orthodox national Churches, so that we may show to the world our united Orthodox faith and witness. This is a powerful visible sign of our unity, which is a precious gift that must be nurtured and sustained by all.

And yet, it is further the case that we have the responsibility to ensure that the Holy Places are open to all people of goodwill without distinction, for the true Orthodox ecumenical spirit welcomes all, so that all may know the spiritual refreshment of those places that are signs of the divine-human encounter. In this way, the Patriarchate guarantees the Christian character of Jerusalem and the Holy Land.

We rejoice, therefore, on this great feast, and we pray that our crucified, risen, and ascended Lord Jesus may enlighten our hearts and strengthen us in our mission. Amen.”

His Beatitude offered Archimandrite Romanos an icon-painting of Jerusalem and received an icon of the Theotokos in return.

The Patriarchal visits concluded at the Monastery of the Men of Galilee, where the Hegoumen Archimandrite Anthimos offered breakfast, with milk and eggs.