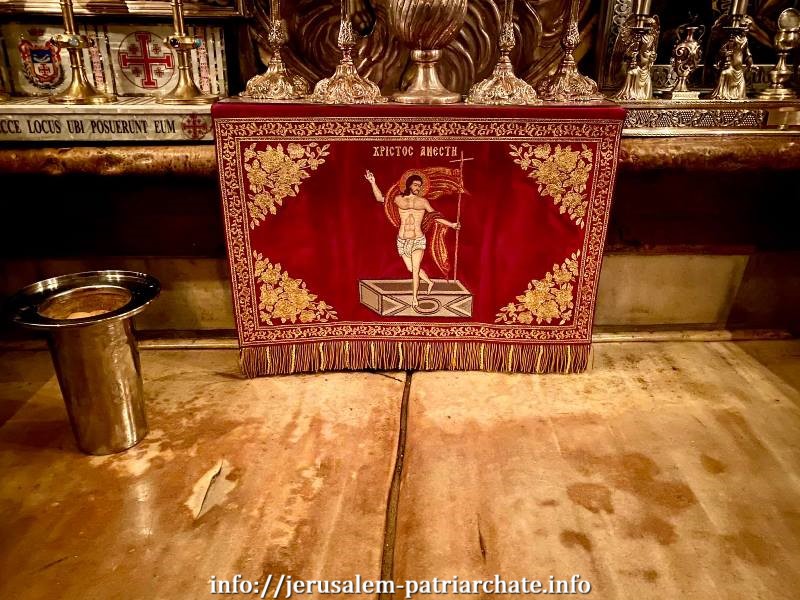 and all of Palestine

to all the gathering of the Church, grace and mercy and peace

“Now all things are filled with light,

heaven and earth and the nethermost regions of the earth.

celebrate the arising of Christ, whereby it is established.

(Troparion Ode 3 of the Easter Canon by John Damascene)

Indeed, the rising from the dead of our Lord and God and Saviour Jesus Christ filled the universe with the unweaning and unending light. The Son and Word of God, who became Incarnate from the Holy Spirit and the Virgin Mary, Jesus Christ the Nazarene, the Crucified, having suffered in the flesh, was buried, descended in Hades and conquered death. By His death He conquered death. Being in Hades for three days, He preached to those in Hades, the bound ones of old, and liberated them from him. He set them free from the baleful torment of the remorse of conscience, from the pitch-black darkness of ignorance and the unbearable despair, and brought them back into Paradise. Having completed His Father’s work on earth, He also completed it in the depths of the earth, in Hades. “The immaculate body of the Redeemer of our souls saw no corruption of death”. By His own power, He was risen from the dead, along with the human flesh He had assumed and by His mighty hand co-resurrected the Forefather Adam and his reposed descendants.

God sent an angel to announce to men this supernatural work of the renewal and regeneration of His creature through the Resurrection of Christ. The bright angel who rolled the stone of the Tomb and sat on it told the myrrh-bearing women: “Be not affrighted: Ye seek Jesus of Nazareth, which was crucified: he is risen; he is not here: behold the place where they laid him” (Mark 16:6). The all-bright angelic vision and the joyful announcement was completed, confirmed and sealed by the vision of Him, the Risen from the dead Lord. With His luminous and glorified body, having His side pierced and with visible the signs of the nails in His hands and feet, “He appeared first to Mary Magdalene, out of whom He had cast seven devils” (Mark 16:9), saying to her: “Touch me not; for I am not yet ascended to my Father” (John 20:19). Likewise, He appeared “the same day at evening, being the first day of the week, when the doors were shut to the disciples in the Upper Room and saith unto them, Peace be unto you”, and “Receive ye the Holy Ghost” … “whose soever sins ye remit, they are remitted unto them; and whose soever sins ye retain, they are retained” … “And after eight days again, He appeared to His disciples who were within, and Thomas with them”, correcting his good disbelief into steadfast faith and calling “blessed those that have not seen, and yet have believed” (John 20:19-29). Indeed, “how wise are His judgements” the hymnographer chants, while He made Peter realize His Resurrection only by the clothes that were laid aside in the Tomb, on the other hand, He was walking along with Luke and Cleopas and did not reveal Himself directly to them during their conversation but “He sat at meat with them, took bread, and blessed it…and their eyes were opened, and they knew Him” (Luke 24;30-31). Immediately after that, Oh the marvel of His omnipresence, “He stood in Jerusalem among their midst” saying to them, “Behold my hands and my feet, that it is I myself: handle me, and see; for a spirit hath not flesh and bones, as ye see me have” … and asked of them “Have ye here any meat? And they gave him a piece of a broiled fish, and of a honeycomb” (Luke 24:36-43); as Saint John Damascene explains, “not because He needed to eat after the Resurrection, but verifying thus the truth of His Resurrection”.

In these ways, “He shewed Himself alive after His passion by many infallible proofs, being seen of them forty days, and speaking of the things pertaining to the kingdom of God” (Acts 1:3), “while they beheld, He was taken up, and a cloud received Him out of their sight” (Acts 1:9), and “He ascended up on high” (Psalm 68:19, Eph. 4:8), deifying the whole substance He had assumed from us, namely our human nature through His Incarnation, He sat at the right of the Father “coming again in glory to judge both the living and the dead”.

Having fulfilled His Promise therein, He sent to us another Comforter through the Father, the Spirit of truth, and enlightened, strengthened, vivified and gladdened the Holy Disciples and Apostles, and through them, His body, the Church. By this grace and the power given by Him, the Church continues His redemptive mission on earth. It receives people, makes them its members through baptism “unites them with Christ”, humanizes them through His teaching of conciliation, peace, concord and love, not only towards our fellow men but even towards our enemies, sanctifies them through the sacraments, makes them workers of beneficiary deeds in society and upon their death, it transfers them to the heavenly life, with joy and cheerfulness, where they relish the eternal light of the Trinitarian God in the hope of the Resurrection unto eternal life.

The Church of Jerusalem, which according to the psalmist “the Lord loveth the gates of Zion more than all the dwellings of Jacob” (Psalm 87:2), “was the first to receive the remission of sins through the resurrection”, and now co-suffers with the Covid-19 pandemic plague, and prays from the empty and Life-giving Tomb for the healing of all people who suffer from it, for the return of the pilgrims to the Holy Land, for the peace and stability in the world and in the Middle East, and especially for the health, prosperity and salvation of its Christian congregation all over the world.

In the Holy City of Jerusalem PASCHA 2021.

“Heaven and earth are made one today for Christ is born. Today God is come upon the...