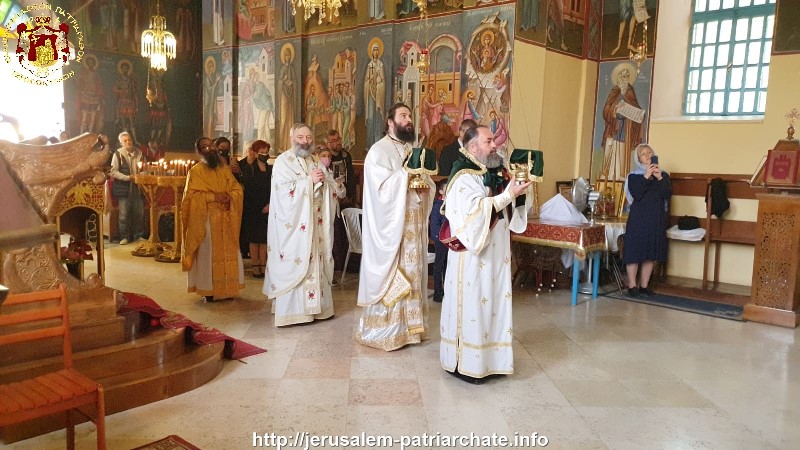 On Sunday morning, 5/18 April 2021, of the 5th Sunday of Lent, His Beatitude our Father and Patriarch of Jerusalem Theophilos officiated the Divine Liturgy at the Holy Monastery of the Nativity of Saint John the Baptist in Ein Karem, which is now adjacent to West Jerusalem, near the Jewish Hospital Hadassa.

This Monastery of Saint John the Baptist was built a long time ago, while the Church in it was built during the Office of the Patriarch of Jerusalem Cyril, around AD 1864. This area is known from the Gospel as “a Judean town in the hill country” where the Mother of God went “in haste and greeted Elizabeth” (Luke 1:39-50), and where “the greatest man born of a woman”, Saint John the Forerunner, was born.

Co-celebrants to His Beatitude were their Eminences; Metropolitan Kyriakos of Nazareth, Metropolitan Joachim of Helenoupolis, Hagiotaphite Fathers, the Head of the Russian Community of the Patriarchate Fr Nikolaos Koulinsky, and Archdeacon Mark. The Service was attended by the Consul General of Greece in Jerusalem Mr Evangelos Vlioras, members of the Greek-speaking and Russian-speaking Communities of Jerusalem.

“But Jesus called them to him, and saith unto them, Ye know that they which are accounted to rule over the Gentiles exercise lordship over them; and their great ones exercise authority upon them. But so shall it not be among you: but whosoever will be great among you, shall be your minister: And whosoever of you will be the chiefest, shall be a servant of all. For even the Son of man came not to be ministered unto, but to minister, and to give his life a ransom for many” (Mark 10:42-45).

Today, the fifth Sunday of Lent, our Holy Church commemorates Saint Mary of Egypt, who became an example of humility and repentance for those who wish to be free from the bondage of the passions and sin, and especially from the carnal passions. “I came not to call the righteous, but sinners to repentance” (Mark 2:17) the Lord says.

These words of the Lord refer to the man who was created according to the image and likeness of God, and he is the grandeur of the logical creation, of the creation of the world.

As a gift of God, repentance gives the sinner the opportunity to come “to the knowledge of the truth” (2Tim. 2:24), namely to be guided to the full and correct knowledge of the truth, by which his salvation in Christ is achieved. According to Saint John of the Ladder, “repentance means the renewal of baptism. Repentance means an agreement with God for a new life. And the repentant is a buyer of humility”.

In other words, repentance predisposes humility, of which Christ became an example, as Saint Paul preaches by saying: “And being found in fashion as a man, he humbled himself, and became obedient unto death, even the death of the cross. Wherefore God also hath highly exalted him and given him a name which is above every name” (Philip. 2:8-9).

Moreover, Christ Himself orders us: “And whosoever of you will be the chiefest, shall be a servant of all. For even the Son of man came not to be ministered unto, but to minister, and to give his life a ransom for many” (Mark 10:45). Commenting on this phrase of the Lord, Saint Theophylaktos says: “The Son of Man came to give His life a ransom for many, which is greater than to minister; for when one does not only minister but also dies for the one he serves, what is greater than that or more marvellous? However, this ministry and condensation [of Christ] became glory and elevation for Him and for all”. And Saint Chrysostom says: “Because [Christ] humbled Himself, all creation was able to know Him”.

Sin, namely the sickness of both soul and body, accompanies man throughout his life on earth, as King-Prophet David confesses: “For I acknowledge my transgressions: and my sin is ever before me” (Psalm 51:3). And this, because again according to David: “Behold, I was shapen in iniquity; and in sin did my mother conceive me” (Psalm 51:5).

Likewise, the infinite compassion and mercy of God “from everlasting to everlasting upon them that fear him” (Psalm 103:17) according to the psalmist. “And his mercy is on them that fear him from generation to generation” (Luke 1:50) according to the testimony of Saint Luke the Evangelist. In other words, my dear brethren, God looks in favour and mercy upon those who turn to Him in fear and reverence, and with a repentant and humble heart.

Precisely this favour and mercy of God did Saint Mary receive when she came to herself and decided to change her life and invoke God’s mercy through her repentance. Therefore, the hymnographer says: “The power of Thy Cross, O Christ, has worked wonders, for even the woman who was once a harlot chose to follow the ascetic way. Casting aside her weakness, bravely she opposed the devil; and having gained the prize of victory, she intercedes for our souls” (Vespers Sticheron).

Indeed, through repentance and of course, the power of the Sacred Cross, Saint Mary achieved the cleansing of her heart and the dwelling of the Holy Spirit in that heart, according to the words of David: “Create in me a clean heart, O God; and renew a right spirit within me” (Psalm 51:10). “Right spirit in us, is not the one that gives us life, but the Spirit of God. This is ‘within’, namely in the very heart of the soul and wills to renew us” Isychios of Jerusalem interprets. According to Origen, “at first the clean heart is formed, then immediately the Spirit is renewed within it”.

Behold, therefore, why repentance is the renewal of baptism and an agreement with God for a new life. Let us hear Saint Paul saying: “And as it is appointed unto men once to die, but after this the judgment: So Christ was once offered to bear the sins of many, and unto them that look for him shall he appear the second time without sin unto salvation” (Hebrews 9:27-28). And in more detail, Christ will appear a second time, without carrying the sins of others. And He will appear then to those who are waiting for Him in hope and pain, in order to save them.

As for us, my dear Brethren, let us entreat the Mother of God along with the hymnographer and say: “All-pure Lady, who drivest off the assaults of the harsh calamity, give us help through thine intercessions” (Matins, Ode 3, Theotokion). And you, all-lauded Mary, as you stand in boldness before Christ, intercede for the salvation of our souls”.

Many happy returns and blessed the remaining of Great Lent!”

After the Divine Liturgy, the good keeper of the Monastery Monk Hariton hosted a reception for His Beatitude, His Entourage and the congregation.

HOLY WEEK AND EASTER IN QATAR