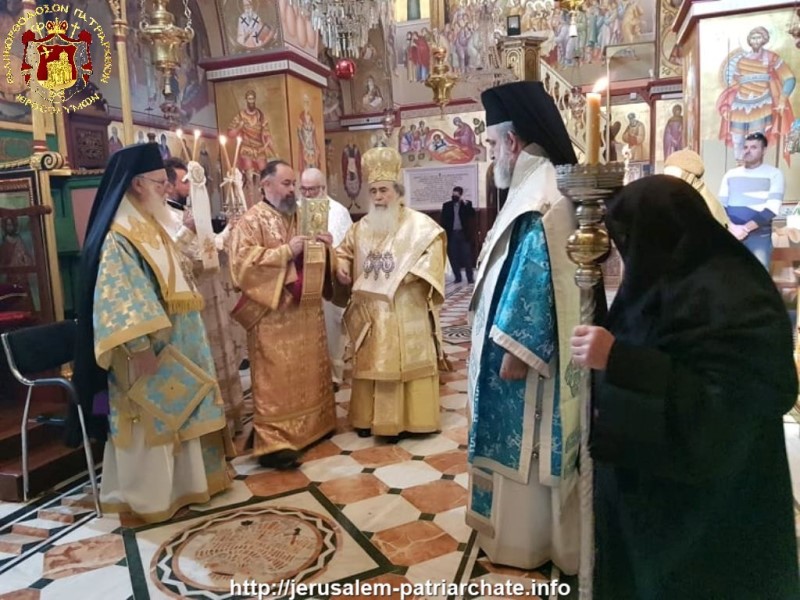 On Sunday 29 March/11 April 2021, His Beatitude our Father and Patriarch of Jerusalem Theophilos officiated the Divine Liturgy at the Holy Monastery of the Transfiguration of the Lord on Mount Tabor, with the welcoming of the Hegoumen Archimandrite Ilarion and the Nuns under his obedience.

“And one of the multitude answered and said, Master, I have brought unto thee my son, which hath a dumb spirit; And wheresoever he taketh him, he teareth him: and he foameth, and gnasheth with his teeth, and pineth away on the ground, and wallowed foaming…And ofttimes it hath cast him into the fire, and into the waters, to destroy him: but if thou canst do anything, have compassion on us, and help us. Jesus said unto him, If thou canst believe, all things are possible to him that believeth. And straightway the father of the child cried out, and said with tears, Lord, I believe; help thou mine unbelief” (Mark 9:17-24).

Today, on the fourth Sunday of the Great Lent, our Holy Church commemorates Saint John, the author of the Ladder and we read the Gospel narrative regarding the healing of a son, whose father asks for help for his disbelief. Moreover, Saint Mark, the Evangelist does not omit that Christ was preaching to His disciples, telling them that the Son of man will be “delivered into the hands of irreverent men, and they shall kill him; and after that, he is killed, he shall rise the third day” (Mark 9:31).

In His infinite mercy, Christ heals the “son who hath a dumb spirit”, meaning that He liberates him from the bondage and the tormenting captivity of the devil. “ye shall know the truth, and the truth shall make you free” (John 8:32) the Lord says. And we wonder, “what is the truth” (John 18:38). Christ is the truth, according to His own testimony: “I am the way, the truth, and the life” (John 14:6). And how is the truth known? Through faith; What faith? That Christ is the Son of God (John 1:34), Who said, “I am not come to call the righteous, but sinners to repentance” (Matt. 9:13).

It was precisely to this faith to the Son of God, the faith which calls man to repentance, and which has the power to “make all things possible to those who believe” (Mark 9:23) that the father of the possessed son was called.

To the contradictory cry of the father, “Lord, I believe; help thou mine unbelief” (Mark 9:24), the interpreters of this verse, Victor of Antioch and Cyril of Jerusalem distinguish two kinds of faith. Father Victor says: “if he believed, how did he say, help me in my disbelief? Faith is different. The first introductory, the second perfect. Beginning to believe, the father entreated the Lord Who had the power to add what was missing. Likewise, the disciples were saying to the Lord, “Increase our faith” (Luke 17:5).

And Cyril of Jerusalem says; “The name of faith is one, but divided into two. For there is one kind of faith, the dogmatic, which has the consent of the soul; and it is beneficial to the soul, as the Lord says: “He that heareth my word, and believeth on him that sent me, hath everlasting life, and shall not come into condemnation, but is passed from death unto life” (John 5:24).

The second kind of faith is that related to the grace which is granted by Christ. “For to one is given by the Spirit the word of wisdom; to another the word of knowledge by the same Spirit; To another faith by the same Spirit; to another the gifts of healing by the same Spirit” (1 Cor. 12:8-9). This faith, which is granted by the grace of the Spirit, is dogmatic and active for the sake of man. And the one who has this faith “shall say unto this mountain, Remove hence to yonder place, and it shall remove, and nothing shall be impossible unto you” (Matt. 17:20).

This faith “which is active for the sake of man” did today’s honoured Saint John of the Ladder receive. According to Saint Cyril of Jerusalem, this faith, which is given by our Orthodox Church and established by the Holy Bible, is we called to acquire and keep, my dear brethren.

Our Holy Apostolic Church is guiding us to this faith, which is active and illumines the soul, through fasting, abstinence from the passions, repentance and prayer during the Great Lent, as Saint Paul says: “Above all, taking the shield of faith, wherewith ye shall be able to quench all the fiery darts of the wicked” (Eph. 6:16).

Let us entreat the Most Holy Theotokos that by Her intercessions and the supplications of our Holy Father John of the Ladder, we may be worthy to venerate the Holy Passion of our Lord and Saviour Jesus Christ, who was transfigured on Mount Tabor, and reach His Holy Resurrection. Amen! Many happy returns!”