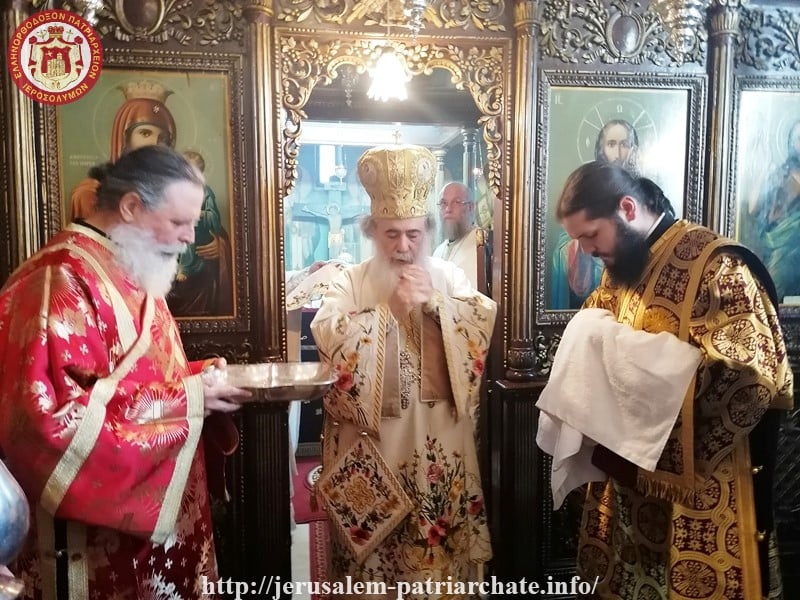 On Tuesday, 3/16 February 2021, the Patriarchate celebrated the feast of Saint Simeon the God-receiver.

On this feast, the Church and especially the Church of Jerusalem commemorates the co-operation of Saint Simeon in the mission of God’s Providence for our salvation. Saint Simeon was a righteous and holy man, who lived on the borderline between the Old and the New Testament and was informed by the Holy Spirit that “he should not see death before he had seen the Lord’s Christ” (Luke 2:26).

This prophecy of the Holy Spirit was fulfilled when the Lord’s parents brought Him for his sanctification when He was forty days old to the Temple of Solomon. Then Simeon rejoiced in recognizing the infant is his arms to be “the salvation” of the Lord and cried out: “Lord, now lettest thou thy servant depart in peace, according to thy word: For mine eyes have seen thy salvation, Which thou hast prepared before the face of all people; A light to lighten the Gentiles, and the glory of thy people Israel” (Luke 2:29-32).

This feast was officiated at the Holy Monastery of Saint Simeon by H.H.B. our Father and Patriarch of Jerusalem Theophilos, with co-celebrants their Eminences the Archbishops; Aristarchos of Constantina, Theodosios of Sebastia and Metropolitan Joachim of Helenoupolis, Elder Kamarasis Archimandrite Nectarios, the representative of MISSIA of the Moscow Patriarchate, Hegoumen Archimandrite Alexander, Archdeacon Mark, the Hierodeacons Simeon, Eulogios, Marcellus and other Fathers.

The chanting was delivered by Mr Vasilios Gostopoulos and the Patriarchal School students, and the service was attended by the Consul General of Greece in Jerusalem Mr Evangelos Vlioras and quite a few faithful.

“The Lord hath made known his salvation: his righteousness hath he openly shewed in the sight of the heathen. He hath remembered his mercy and his truth toward the house of Israel: all the ends of the earth have seen the salvation of our God” (Psalm 98: 2-3) the psalmist proclaims.

The Holy Church of Christ, hearkening to David’s words: “Make a joyful noise unto the Lord, all the earth: make a loud noise, and rejoice, and sing praise” (Psalm 98:4), has gathered all of us in this Holy place where the tomb of Saint Simeon the God-receiver is preserved, in order to celebrate both his commemoration and contribution to the historic event of the meeting with the new infant, our Lord Jesus Christ in the Holy Altar of God, in the Temple of Solomon.

“When the Elder had seen with his eyes the salvation that came from God unto the peoples he cried to Thee: O Christ, Thou art my God” (Katavasia, Ode six); and in simple words: Lord when the Elder Simeon saw with his own eyes the Saviour that had come for all the nations, he cried with a loud voice: “Christ, You are my God, Who was born from God the Father”, and Cosmas the melodist says according to the testimony of Saint Luke the Evangelist: “And when the days of her purification according to the law of Moses were accomplished, they brought him to Jerusalem, to present him to the Lord… Then took he him up in his arms, and blessed God, and said, Lord, now lettest thou thy servant depart in peace, according to thy word: For mine eyes have seen thy salvation, Which thou hast prepared before the face of all people; A light to lighten the Gentiles, and the glory of thy people Israel” (Luke 2:27-32).

According to the interpretation of the inspired Church Fathers, “the salvation of God” who Elder Simeon’s eyes beheld, is no other than Christ. “Salvation he called the incarnation of the Only Begotten”, Saint Theophylaktos says; “born for the salvation of the people”, Zigavinos adds. “It is customary for the Bible to call the Christ of God as salvation”, Saint Basil the Great notes. And being the salvation means His incarnate presence according to Saint Athanasios. “He had prepared [the salvation] of Christ from the beginning of the world and it was revealed to us in the last ages” Saint Cyril of Alexandria comments, and quotes Apostle Peter: “ye were redeemed with the precious blood of Christ, as of a lamb without blemish and without spot: Who verily was foreordained before the foundation of the world, but was manifest in these last times for you” (1 Peter 1:18-20).

It is made clear thus, that the “salvation of God” is the Word of God “Who for our salvation, in the last days, dwelt in the womb of the Holy Virgin and through her He was born in the flesh without any alteration” according to Saint John Damascene.

The righteous Simeon did not only confess that the infant in his arms is Christ, the Saviour of the world but also became a seer of the unapproachable and uncreated light, of the divinity of Christ, as Saint Basil the Great teaches clearly: “Anna was announcing, Simeon held in his arms a small infant the great God, worshipping Him; they did not despise the vision but glorified the greatness of His divinity. For the Divine Power was visible like light through glass threads through the human body, shining through those who had the eyes of the heart purified”.

It is noteworthy that indeed it was said to Simeon that “he should not see death before he would see the Christ of the Lord” (Luke 2:26). But Saint Simeon never ceased keeping the eyes of his heart purified. “Blessed are the pure in heart, for they shall see God”(Matt 5:8) the Lord says. “The light of the righteous rejoiceth: but the lamp of the wicked shall be put out” (Proverbs 13: 9) the wise Solomon says.

Elder Simeon is distinguished among the great personalities and the Prophets of the Old Testament because he was deemed worthy to worship “the great God as a small infant”, namely Christ, while the other Prophets foretold God the Word, Christ, Who would become incarnate through the Virgin. And the preserved incorrupt relics of Saint Simeon is a great witness of the Grace and the glory he received by God, as the psalmist says: “Light is sown for the righteous, and gladness for the upright in heart” (Psalm 97:11). “The noetic and divine light shines in the mind and heart of everyone who is pure and righteous,” Saint Cyril of Alexandria says.

And the divine light that dawns in the righteous ones is no other than the enlightening power of the Holy Spirit, through which Simeon the God-receiver prophesized to Mary: “Behold, this child is set for the fall and rising again of many in Israel; and for a sign which shall be spoken against; (Yea, a sword shall pierce through thy own soul also,) that the thoughts of many hearts may be revealed” (Luke 2:34-35).

Interpreting these words, Saint Cyril of Alexandria says: “Emanuel is set by God the Father as the foundation a stone, a tried stone, a precious cornerstone, a sure foundation: he that believeth shall not make haste” (Isaiah 28:16), “And whosoever shall fall on this stone shall be broken: but on whomsoever, it shall fall, it will grind him to powder” (Matt. 21:44). And referring to the Mother of Christ, Zigavinos says: “He called ‘a sword’ the honourable and sharp pain that pierced the Theotokos’ heart when her Son was crucified. Simeon prophesied about this deep pain.” And Saint Cyril clarifies this by saying: “Like by a sword, the Virgin was pierced and wounded when she saw the One who was born from her in the flesh to be crucified”.

Let us entreat today’s honoured righteous Simeon the God-receiver, so that we who believe in God the Word who was born by the Holy Virgin in the flesh, our Lord Jesus Christ, will not be put to shame, but by his prayers, we may be worthy of the Kingdom of Heaven. And let us say along with the hymnographer: “He who is full is emptied out; He who is before eternity receiveth a beginning; the word taketh on the grossness of matter; the Artificer is fashioned; the Uncontainable, assuming a body, is contained in thy womb, O Virgin, graced of God” (Minaion, Feb.3, Ode 1, Theotokion). Amen”.

After the Divine Liturgy, the Elder Hegoumen and renovator of the shrine Archimandrite Theodoritos hosted a reception for the Patriarchal Entourage and the congregation at the Hegoumeneion.