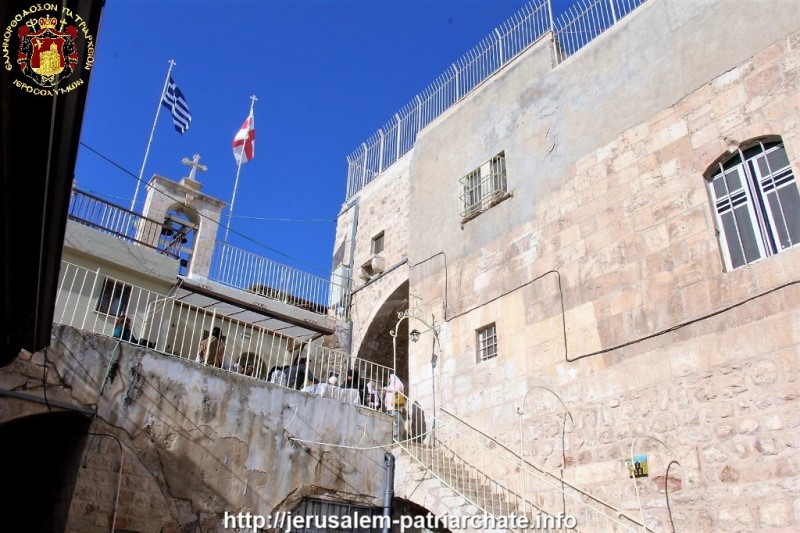 THE FEAST OF SAINT NIKOLAOS AT THE PATRIARCHATE

On Saturday, December 6/19, 2020, the Patriarchate celebrated the commemoration of our Father among the Saints Nikolaos Archbishop of Myra in Lycia.

On this feast the Church commemorates that Saint Nikolaos was the Archbishop of Lycia, “as a rule of faith, an icon of meekness” who “achieved the heights of humility, riches by poverty”, who helped the poor, the needy, the prisoners, the sea travellers, the orphans, and supported the doctrine of the One Essence of the Son with the Father in the 1st Ecumenical Synod of Nice in A.D. 325.

This feast was celebrated by the Patriarchate:

During the Divine Liturgy H.H.B., our Father and Patriarch of Jerusalem Theophilos visited the Monastery for veneration, escorted by Hagiotaphite Fathers.

The Episcopal Entourage and the Congregation were offered a reception by the Caretaker of the Monastery, Archdeacon Mark.

The feast was celebrated at the grand Holy Church of Beit Jala, only by the Parish Priests, without any Fathers from the Patriarchate Headquarters due to covid-19. Despite the restrictive measures, many faithful Christians attended the Liturgy as this is the feast of the Patron Saint of the city. His Beatitude sent the following Sermon to the faithful in Beit Jala:

“A fervent protector art thou of the whole Church of Christ, most boldly destroying the ungodly teachings of all the impious heresies; and a rule of Orthodoxy wast thou to all men, interceding for all them that follow thy teachings and godly admonitions, O most merciful Nikolaos”, the hymnographer proclaims.

The sacred commemoration of our Father among the Saints Nikolaos, Archbishop of Myra in Lycia, the wonderworker, has gathered us all in the Holy Church dedicated to him, in order to thank our Lord God in eucharist, and honour the Holy Hierarch who has glorified Him.

Saint Nikolaos was born in Patara of Lycia and was distinguished for the clarity of his life, his great pastoral work and especially for the defence of the correct doctrines of the Orthodox faith, by his active participation in the 1st Ecumenical Synod in Nice in A.D. 325, where he put to shame the false teachings of heretic Arios.

Hearkening to David’s words, “Seek the Lord, and his strength: seek his face evermore” (Psalm 105: 4), our Holy Father Nikolaos entreated God in fervent desire, and He strengthened him with the Holy Spirit so that Christ would dwell in his heart through his faith (Eph. 3:16-17). This means that the chosen Nikolaos made himself a Temple, “for a habitation of God through the Spirit” (Eph. 2:22), according to Saint Paul.

Standing firm on the foundation set by the Apostles and the prophets (Eph. 2:20), through the teaching of the Holy Scriptures and the sacred tradition of the Church, Saint Nikolaos opposed strongly the religion of the idols, boldly teaching the truth of the Gospel of Christ. Because of this, he was arrested by the idolaters, “and having suffered physical violence by them he was thrown into jail along with other Christians. And when Constantine the Great assumed the Kingdom of the Greeks, the prisoners were set free; with them, Saint Nikolaos was released, and “accepted the Episcopal Office for his great virtue” in Myra, as his Synaxarist states.

The Episcopal office of our Father Nikolaos in Myra of Lycia and his pastoral and philanthropic activities made him “a burning and a shining light” (John 5:35), according to the Lord’s advice: “Let your loins be girded about, and your lights burning” (Luke 12:35). This is precisely what his hymnographer sates with the words: “Rejoice, sacred and venerable head, thou undefiled abode of virtue and sanctity; divine canon of the priesthood, that most divine gift of God; and the great and famous shepherd known to all; thou beacon that worthily art the namesake of victory; thou who dost answer with compassion those asking thee and who doest incline to the prayers of the suffering. Rescuer ever ready and the guardian saving all who with right faith keep thy glorious and resplendent memorial. Implore Christ the Saviour O blest Nikolae to send down great mercy on us all” (Great Vespers, Aposticha 1).

Indeed, my dear brethren, Bishop Nikolaos was “the divine canon of the priesthood and the great and famous shepherd known to all” (Vespers Aposticha 1).

And he accomplished this by paying heed to Saint Paul’s advice to his disciple Timothy: “Be not thou therefore ashamed of the testimony of our Lord nor of me his prisoner: but be thou partaker of the afflictions of the gospel according to the power of God; Who hath saved us, and called us with a holy calling, not according to our works, but according to his own purpose and grace, which was given us in Christ Jesus before the world began, But is now made manifest by the appearing of our Saviour Jesus Christ, who hath abolished death, and hath brought life and immortality to light through the gospel” (2 Timothy, 1:8-10).

This truth, that the grace and truth were revealed through the incarnation and appearance of our Saviour Jesus Christ, Who abolished death and brought into light the life and incorruptibility with the Gospel teaching, is what our Father Nikolaos used to teach, as he became an imitator of Saint Paul, according to the latter’s command: “Be ye, followers of me, even as I also am of Christ” (1 Cor. 11:1).

The Holy Church of Christ calls us today through its hymnographer, to “gather with songs of praise and extol in comeliness” the annual feast of our God-bearing Father Nikolaos. And as Saint Athanasius the Great says: “the present feast is a place of the heavenly joy for those who join it in psalms and spiritual songs”.

In other words, the annual feast of the Saints of the Church, and now of our Holy Father Nikolaos, reminds us of Saint Paul’s words: “For as many of you as have been baptized into Christ have put on Christ” (Galatians 3:27). Which means “that so many of us as were baptized into Jesus Christ were baptized into his death. Therefore, we are buried with him by baptism into death: that like as Christ was raised up from the dead by the glory of the Father, even so, we also should walk in newness of life” (Romans 6:3-4), displaying a life that is fully committed to the Lord’s commandments, as the psalmist says: “But the mercy of the Lord is from everlasting to everlasting upon them that fear him, and his righteousness unto children’s children; To such as keep his covenant, and to those that remember his commandments to do them” (Psalm 103:17-18).

Let us, therefore, my dear brethren, entreat the minister of the Lord, Saint Nikolaos, to never cease praying to Christ our God, who became Incarnate through the pure flesh of the Ever-Virgin, Most Blessed Theotokos Mary, for those who honour his commemoration in faith. And along with the hymnographer, let us say: “Make ready, O Bethlehem, let the manger be prepared, let the cave show its welcome. The Truth is come, the shadow is passed away; God hath appeared from a Virgin unto men, formed as we are, and deifying that which He hath assumed. Wherefore, Adam is renewed with Eve, as they cry out: Thy goodwill hath appeared on earth to save our race” (The Royal Hours of Christmas, 1st hour, Troparion 1).

Many happy returns and blessed Christmas, without the Covid plague. Amen.”

THE SERVICE OF THE AKATHIST HYMN AT THE PATRIARCHATE