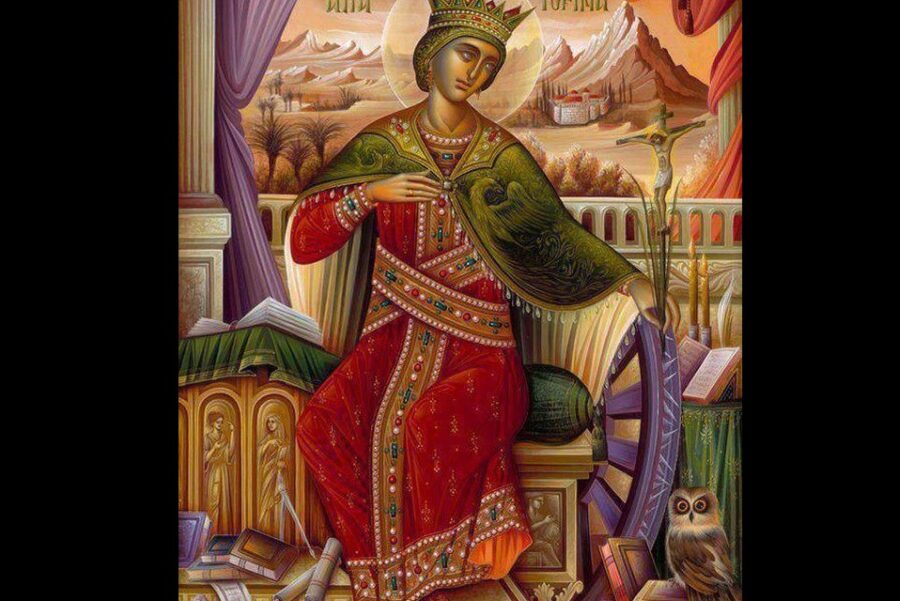 She is often shown seated at a desk upon which is an open book. Other books and a celestial sphere at her feet, to indicate her extensive knowledge and wisdom she received on the hands of the finest philosophers and teachers of antiquity.

St. Catherine or Agia Aikaterini whom we celebrate today, combined an uncommon beauty, knowledge and wisdom. She utterly vanquished the passionate and unbridled soul of Maximian, the tyrant of Alexandria. And by her eloquence, she stopped the mouths of the so-called philosophers who had been gathered to dispute with her.

Her entry to Christianity:

The Orthodox tradition narrates that many young men from the wealthiest families of the empire sought the hand of the beautiful Catherine, but none of them were chosen. Catherine declared to her parents that she would agree to enter a marriage only with someone who surpassed her in illustriousness, wealth, comeliness and wisdom.

The spiritual father of her mother, who was a saintly elder pursuing prayerful deeds in solitude in a cave not far from the city, knew of such youth, who surpassed Catherine in everything, such that “His beauty was more radiant than the shining of the sun, His wisdom governed all creation, His riches were spread throughout all the world — this however did not diminish but rather added to the inexpressible loftiness of His lineage”. The image of the Christ produced in the soul of the holy maiden an ardent desire to see Him. Before leaving his cave, the elder handed Catherine an icon of the Mother of God with the baby Jesus on Her arm and bid her to pray with faith to Mary for the bestowing of the vision of Her Son.

Katherine prayed all night and was given to see the Most Holy Virgin, who sent Her Divine Son to look upon the kneeling of Katherine before Them. But the Child turned His face away from her saying, that He was not able to look at her because she was ugly, of shabby lineage, beggarly and mindless like every person — not washed with the waters of holy Baptism and not sealed with the seal of the Holy Spirit. Catherine returned to the elder deeply saddened. He lovingly received her, instructed her in the faith of Christ, admonished her to preserve her purity and integrity and to pray unceasingly; he then performed over her the sacrament of holy Baptism. And again, Saint Catherine had a vision of the Most Holy Mother of God with Her Child. Now the Lord looked tenderly at her and gave her a ring — a wondrous gift of the Heavenly Bridegroom.

Catherine’s encounter with Maximian and the wisemen:

During that time, Emperor Maximian was in Alexandria for a pagan feast. Because of this, the feast was especially splendid and crowded. The cries of the sacrificial animals, the smoke and the smell of the sacrifices, the endless blazing of fires, and the bustling crowds at the arenas filled Alexandria. Human sacrifices were also brought – because they consigned to death in the fire the confessors in Christ, those not recanting from Him under torture. The Saint’s love for the Christian martyrs and her fervent desire to lighten their fate impelled Catherine to go to the pagan head-priest and ruler of the empire, the emperor-persecutor Maximian.

Introducing herself, the saint confessed her faith in the One True God and with wisdom denounced the errors of the pagans. The beauty of the maiden captivated the emperor. In order to convince her and show the superiority of pagan wisdom, the emperor gave orders to gather 50 of the most learned men (rhetoricians) of the empire, but the Saint got the better of the wise men, such that they themselves came to believe in Christ. Saint Catherine shielded the martyrs with the sign of the cross, and they bravely accepted death for Christ and were burnt by order of the emperor.

Maximian, no longer hoping to convince Catherine, tried to entice her with the promise of riches and fame. Having received an angry refusal, the emperor gave orders to subject the saint to terrible tortures and then throw her in prison. The Empress Augusta, who had heard much about the saint, wanted to see her. Having prevailed upon the military-commander Porphyry to accompany her with a detachment of soldiers, Augusta went to the prison. The empress was impressed by the strong spirit of Saint Catherine, whose face glowed with Divine grace. The holy martyrs explained the Christian teaching to the newly arrived, and they in believing were converted to Christ.

On the following day they again brought the martyrs to the judgement court where, under the threat of being broken on the wheel, they urged that she recant from the Christian faith and offer sacrifice to the gods. The saint steadfastly confessed Christ and she herself approached the wheels; but an Angel smashed the instruments of execution, which broke up into pieces with many pagans passing nearby. Having beheld this wonder, the empress Augusta and the imperial courtier Porphyry with 200 soldiers confessed their faith in Christ in front of everyone, and they were beheaded. Maximian again tried to entice the holy martyrs, proposing marriage to her, and again he received a refusal. Saint Catherine firmly confessed her fidelity to the Heavenly Bridegroom – Christ, and with a prayer to Him she herself put her head on the block under the sword of the executioner.

The relics of Saint Catherine were taken by the Angels to Mount Sinai. In the VI Century, through a revelation, the venerable head and left hand of the holy martyrs were found and transferred with honor to a newly constructed church of the Sinai monastery, built by the holy emperor Justinian (527-565).

A celebratory feast of commemoration is annually held at her monastery in Sinai, which is often led by His Beatitude Patriarch Theophilos III, and another feast takes place in the chapel named after her in the Old City of Jerusalem, just a stone’s throw from the Patriarchate.