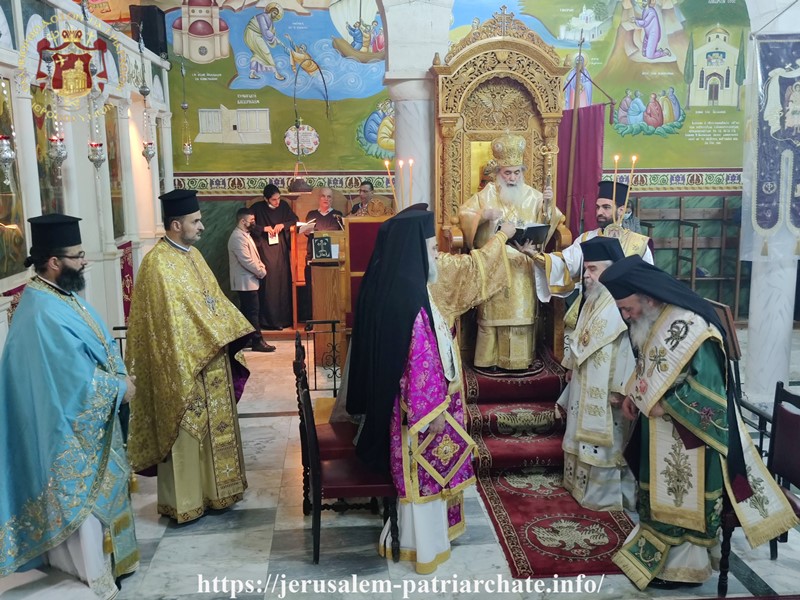 On Saturday, November 9/21, 2020, the Patriarchate celebrated the commemoration of the Holy Archangels Michael and Gabriel at the Holy Monastery dedicated to Archangel Michael which is located near the sea in the ancient town of Joppa /Yaffo.

On this feast, the Church gathers for the Synaxis of the Archangels Michael and Gabriel and commemorates the event that these Bodiless Hosts, the Chiefs of the Angels, fought against Lucifer when the latter opposed God, and prevented with God’s help the other Angels’ fall, by saying “Stand firm”. The Church holds the belief of the testimony in the Holy Bible, both in the Old and in the New Testament, by which the Archangels and all the Angels are “ministering spirits, sent forth to minister for them who shall be heirs of salvation” (Hebrews 1:14).

According to the New Testament, Archangel Gabriel announced to Virgin Mary the Nativity in the flesh of our Lord Jesus Christ, through the Holy Spirit. Angels sang on the Nativity of the Divine Infant “Glory to God in the Highest and on earth peace…”, Angels informed Joseph in his sleep to flee to Egypt to escape Herod’s fury, and Angels summoned him back from Egypt to Nazareth so that the Lord would be called “Nazarene”.

This feast was celebrated in this Holy Monastery with the Divine Liturgy which was officiated by H.H.B. our Father and Patriarch of Jerusalem Theophilos, with co-celebrants their Eminences; Metropolitan Kyriakos of Nazareth, the Archbishops; Damascene of Joppa, Aristarchos of Constantina and Metropolitan Joachim of Helenoupolis, Hagiotaphite Hieromonks, with first in rank Archimandrite Elder Kamarasis Nectarios, the Archimandrites; Niphon and Artemios, the ministering Priests of the Church from the Arab-speaking Community,  Priest Konstanti and the ministering Priests of the Russian-speaking and Romanian-speaking Community, Archdeacon Mark and Hierodeacon Eulogios. The chanting was delivered by the Community choir in Arabic, as the Service was attended by faithful Christians of the Arab-speaking Community, as well as Russians and Romanians, along with the Ambassador of Greece in Tel Aviv Mr Panayiotis Sarris and the Consul General of Greece in Jerusalem, Mr Evangelos Vlioras.

“But to which of the angels said he at any time, sit on my right hand, until I make Thine enemies thy footstool? Are they not all ministering spirits, sent forth to minister for them who shall be heirs of salvation?” (Hebrews 1:13-14) Saint Paul preaches.

Today the grace of the Holy Spirit has gathered us in this Church of the Chiefs of the Archangels Michael and Gabriel, in the historic and Biblical town of Joppa (Yaffo), in order to praise in Eucharist and Doxology the bodiless Angelic forces, who surround God’s immaculate throne, and cry out unceasingly to Him ‘Holy, Holy, Holy art Thou God Almighty’, as Prophet Isaiah says: “I saw also the Lord sitting upon a throne, high and lifted up, and his train filled the temple. Above it stood the seraphim: each one had six wings; with twain, he covered his face, and with twain, he covered his feet, and with twain, he did fly. And one cried unto another, and said, Holy, holy, holy, is the Lord of hosts: the whole earth is full of his glory” (Isaiah 6:1-3).

And according to the Evangelist John’s testimony; “Jesus answered and said unto Nathanael, verily, verily, I say unto you, Hereafter ye shall see heaven open, and the angels of God ascending and descending upon the Son of man” (John 1:51). “As the genuine Son of God, the Angels were ascending and descending upon Him, ministering Him,” Zigavinos says. Quite important is also the interpretation of Saint Cyril of Alexandria regarding the Angels’ liturgical ministry: “Upon the Son of man, serving and ministering Christ’s orders for the salvation of His future believers. For while He is Son of God, it is then [in the future] that He should be recognized as Son of God by nature”.

Very clear is also the Holy Evangelist Luke’s testimony regarding the Angels: “And there were in the same country shepherds abiding in the field, keeping watch over their flock by night. And, lo, the angel of the Lord came upon them, and the glory of the Lord shone round about them: and they were sore afraid. And the angel said unto them, Fear not: for, behold, I bring you good tidings of great joy, which shall be to all people. For unto you is born this day in the city of David a Saviour, which is Christ the Lord. And this shall be a sign unto you; Ye shall find the babe wrapped in swaddling clothes, lying in a manger. And suddenly there was with the angel a multitude of the heavenly host praising God, and saying, Glory to God in the highest, and on earth peace, goodwill toward men” (Luke 2-8-14).

Moreover, the Angels have as their mission the protection and help of the people, for the sake of their salvation, as Saint Paul preaches: “Are they not all ministering spirits, sent forth to minister for them who shall be heirs of salvation?” (Hebrews 1:14). Interpreting these words, Saint John Damascene says: “see the boldness of the Angels, that the Lord sits high above and the Angels minister Him from down below”. And Saint John Chrysostom says: “The Angels’ ministry is to serve God for our (the people’s) salvation…They are servants of God and are sent to many places for our sake”. In other words, the Angels care for the salvation of each one of us.

In today’s Apostolic reading, Saint Paul underlines the diligence we faithful should display, in order to achieve our salvation: “For if the word spoken by angels was steadfast, and every transgression and disobedience received a just recompense of reward; How shall we escape, if we neglect so great salvation; which at the first began to be spoken by the Lord, and was confirmed unto us by them that heard him”(Hebrews 2:2-3). In more detail, if every disobedience of the Law, which God announced to Moses through the Angels was justly punished, how are we going to escape the punishment if we neglect such a great and significant salvation? This salvation was not spoken through the Angels like it was done in the case of the Law, but once it started being preached by the Lord, it was handed over to us, a certain and reliable testimony by the Apostles who had heard everything directly from Christ’s mouth.

And the temporary Bishop Joel of Pella is wondering: “what do we mean by the word ‘salvation’? We mean man’s rescue; the man who is made according to the likeness of God was tarnished, for this reason, it was necessary for Christ to come to earth, to wash clean the likeness and guide man towards his perfection. Salvation is the rescuing of man and his union with God. “Nothing is more sought after and more studied by God than the salvation of our souls”, Saint Chrysostom writes. Saint Peter also says this: “Receiving the end of your faith, even the salvation of your souls” (1 Peter 1:9).

Underlining man’s value and of course that of his soul, Saint Paul borrows the Psalmist’s words: “Thou madest him a little lower than the angels; thou crownedst him with glory and honour, and didst set him over the works of thy hands” (Hebrews 2:7/ Psalm 9:6).

Behold, therefore, why the Holy Church of Christ especially honours and venerates the Synaxis of the Angels, which is led by Michael, the Chief Brigadier of the bodiless hosts. Let us then say along with the hymnographer: “Angels and Archangels, Thrones, Authorities, and Dominions, Principalities and Powers, Cherubim and Seraphim, together with the Theotokos, make entreaty in the world’s behalf” (Minaion, Matins, 1st Canon of Ode 9, Troparion 2). Amen. Many happy returns!”

The Divine Liturgy was followed by a reception and then a meal, hosted by the renovator of the Monastery Most Reverend Archbishop Damascene of Joppa, who also re-constructed the Holy Church of Archangel Michael after it its destruction by fire in 1956.

The feast of the Archangels was also celebrated at their Holy Monastery, opposite the Patriarchate, on the south side.

Vespers in the afternoon and the Divine Liturgy in the morning were officiated by the renovator of the Holy Church Most Reverend Archbishop Demetrios of Lydda, with co-celebrants; Elder Dragoman Archimandrite Mattheos, Archimandrite Demetrios and Hierodeacon Simeon. The chanting was delivered by Mr Vasilios Gotsopoulos and the Patriarchal School of Zion Students, with the help of the Choir Leader of the Monastic Church of Saints Constantine and Helen Archimandrite Eusevios.

After the Divine Liturgy, His Eminence offered a reception at the courtyard of the Church.