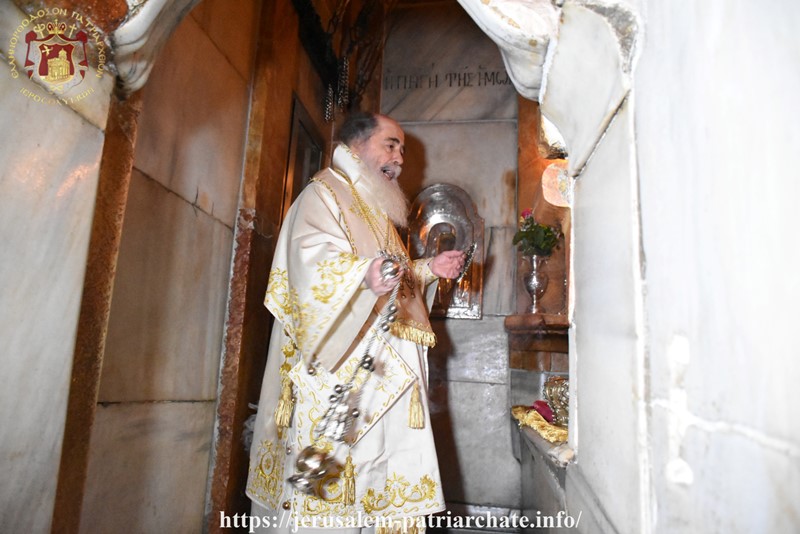 THE FEAST OF THE RESURRECTION AT THE PATRIARCHATE OF JERUSALEM

The feast of the Resurrection of our Lord Jesus Christ from the dead was celebrated at midnight of Holy Saturday/ Easter Sunday, April 5/18, 2020.

On this feast the Church is glorifying in gratitude the divine and wondrous event that the crucified Son and Word of God, Jesus Christ of Nazareth, having been buried, conquered the power of the devil and the authority of Hades and was resurrected from the dead, raising also Adam and his descendants by His mighty Hand.

The Church of Jerusalem celebrated this feast at the Church of the Holy Sepulchre, at the blessed and empty Holy Tomb, with the Service of Matins, the Canon of Holy Saturday and the Divine Liturgy of St. John Chrysostom, with the sermon of the Saint. The Service was officiated by H.H.B. our Father and Patriarch of Jerusalem Theophilos, with co-celebrants their Eminences; Metropolitan Isychios of Kapitolias, Archbishop Aristovoulos of Madaba and only a few Archimandrites, less than ten in total, due to the safety precautions imposed by the Israeli Police due to the corona virus.

Before the Holy Communion, Geronda Secretary-General read the Patriarchal Easter message which follows below;

for all the congregation of the Church, grace, mercy and peace

“We celebrate the death of death, the destruction of Hades, the beginning of an everlasting life. And with leaps of joy we praise the Cause thereof, the only blest and most glorious God of our Fathers”. (Troparion Ode Seven of the Canon of the Resurrection by St. John Damascene)

In unspeakable and absolute joy, with pure hearts and undefiled lips, with unceasing merry voices and pious cheering, the Church proclaims during the night of the Resurrection, and during the whole Easter period, echoing the “Christ is risen from the dead, by death hath he trampled down death, and to those in the graves hath He bestowed life”. In firmness of faith in the Crucified and Resurrected from the dead, our Lord Jesus Christ, and in the hope of the Resurrection unto eternal life, the Church chants “It is the day of Resurrection; let us be radiant for the festival, and let us embrace one another. Let us say O brethren, even to those that hate us; let us forgive all things on the Resurrection”.

This wondrous and joyful message of the victory of death is the fruit of Christ’s crucifixion, for, “behold, through the cross, joy has come unto the whole world”. Christ’s victory over death came through His sacrifice on the Cross. Christ, the Only-begotten Son and Word of God, came down to earth from the bosom of the Father, became incarnate through the Holy Spirit and Virgin-Mary, willingly brought Himself on the Cross as an immaculate sacrifice for the remission of our sins. As Prophet Isaiah had foretold, “he is brought as a lamb to the slaughter, and as a sheep before her shearers is dumb, so he openeth not his mouth” (Isaiah 53:7), and just as St. John the Baptist pointed at Him in recognition, He became on the Cross “the Lamb of God, which taketh away the sin of the world” (John 1:29). The most wondrous of all in this mystery, which signifies the excessive love of God for us, is what the Apostle of nations also says: “For when we were yet without strength, in due time Christ died for the ungodly. For scarcely for a righteous man will one die: yet peradventure for a good man some would even dare to die. But God commendeth his love toward us, in that, while we were yet sinners, Christ died for us” (Romans 5:6-8). Being without sin, Christ “being in the form of God…made himself of no reputation and took upon him the form of a servant: (Phil. 2:6-7), He humbled Himself, willingly came to the Cross and through His immaculate blood “He that forgiveth the ancient debts, rent asunder the handwriting against them and wished to bestow His grace”(Akathist Hymn to the Theotokos, 4th Part).

Having suffered in the flesh for us and buried, Christ went down into Hades. In his greed, Hades was waiting to devour the Son of God. But because of the humility of His sacrifice, Hades was not able to have power over Him. Hades was deceived and embittered. Thinking that he had received a mortal being, he met God, God and man, the God-man Jesus Christ, Who by both the power of God the Father and His own, was risen from the dead, becoming the first-fruits of the dead, and led the way for all humans in flesh to the resurrection from the dead. He sought the lost sheep in Hades, just as He did on earth, , preached the Gospel of repentance and salvation to Adam and Eve and their descendants and as it is depicted on the Orthodox icon of the Resurrection, He drew them into Paradise along with Him. Since then, by the power and faith in the Resurrection, we humans die only in flesh, we dispose our earthly body, for, “flesh and blood cannot inherit the kingdom of God” (1 Cor. 15:50), and live with Him in soul and spirit, “awaiting for the resurrection from the dead and life of the age to come” (The Creed).

Christ had foretold this mystery of the resurrection from the dead to His friends and disciples, while He still lived with them on earth, and after His Resurrection “he shewed himself alive after his passion by many infallible proofs” (Acts 1:3), appearing to them in His crucified body with the nail signs, but radiant and glorified. Through His Disciples who were His eye-witnesses, He passed on this mystery to His body the Church, which He established with the Comforter Spirit, that He sent down to us from the Father, after His Ascension in Heaven on the Day of Pentecost, fifty days after His Resurrection.

Ever since, the Church, which according to the true words of the Lord “the gates of hell shall not prevail against it” (Matt. 16:18), continues His mission on earth. It preaches Christ Incarnate , Crucified and Resurrected, and baptizes in His Name those who believe in Him, sanctifies them with its sacraments and prays for the reconciliation of humanity and for the whole world. It supports the suffering man with all its strength, prays to our Lord Jesus Christ, the healer of souls and bodies , for the cessation of the ongoing pandemic of the current virus, for the healing of those affected by it and for His mercy for those who died by the virus so mercilessly, in the certainty that “though he was crucified through weakness, yet he liveth by the power of God. For we also are weak in him, but we shall live with him by the power of God toward you” (2 Cor. 13:4).

On the bright day of the Resurrection, our Church of Jerusalem, the Mother of Churches, also prays from the Life-giving Tomb where Christ was buried and resurrected, for the unity of the Church and for peace in the Middle East, and wishes to its flock in the Holy Land and all over the world, the power and the blessing of the Resurrected Jesus Christ.

In the Holy City of Jerusalem, PASCHA 2020

With Fatherly and Patriarchal blessings,