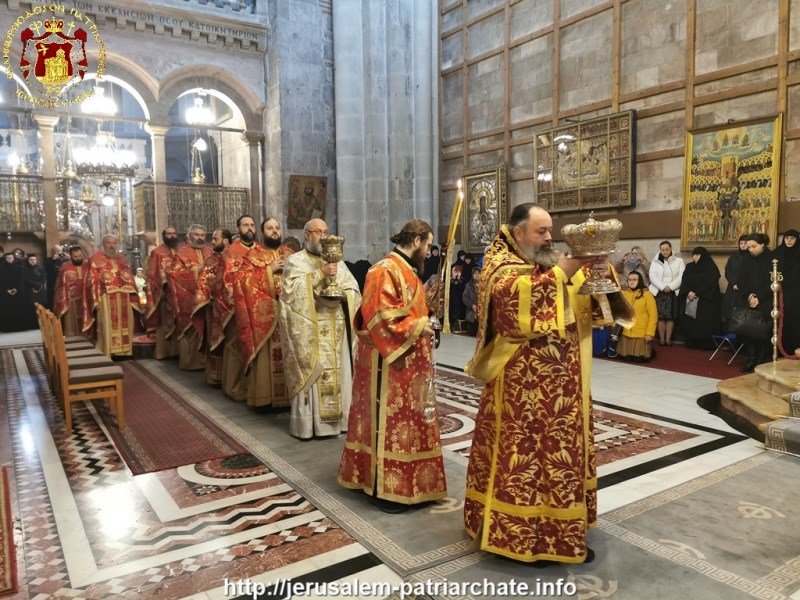 THE SUNDAY OF ORTHODOXY AT THE PATRIARCHATE

Ever since, the Church celebrates the restoration of the icons as a triumph of Orthodoxy, namely of the truth that the holy icons witness the incarnate presence and image of our Lord Jesus Christ on earth.

On this Feast, Great Vespers was held in the afternoon with the welcoming, veneration at the Holy Deposition slate and the Holy Tomb, incense, Great Entrance and the Blessing of Bread, led by H.H.B. our Father and Patriarch of Jerusalem Theophilos.

In the morning of the Feast, the Divine Liturgy was celebrated at the Catholicon, officiated by H.H.B. our Father and Patriarch of Jerusalem Theophilos, with co-celebrants; his Eminence Metropolitan Isychios of Kapitolias, their Eminences Archbishops; Theophanes of Gerassa, Theodosios of Sebastia, Demetrios of Lydda, Makarios of Qatar and Philoumenos of Pella, Hagiotaphite Hieromonks with first in rank Elder Kamarasis Archimandrite Nectarios, visiting Priests from other Churches, and Hierodeacons. The chanting was delivered by the Byzantine Choir Leader Hierodeacon Simeon on the right and Mr. Vasilios Gotsopoulos with Mr. Skordilis on the left. The service was attended by the Consul General of Greece in Jerusalem Mr. Christos Sophianopoulos and members of the Consulate, along with a congregation of local pilgrims.

The Divine Liturgy was followed by the Procession three times around the Holy Tomb and then around the shrines, with all faithful holding icons in their hands.

At the end of the Procession, His Beatitude read the Synodical Decision of Orthodoxy from the Triodion in front of the Holy Tomb.

Finally, bells tolling, the Patriarchal entourage returned to the Patriarchate Main Reception Hall, where His Beatitude addressed all present as follows;

“As the prophtes saw, as the Apostles taught, as the Church has received…Likewise we believe, likewise we speak, likewise we preach Christ our true God, and honour His Saints by word, venerating in icon God as the Master, and respecting the genuine healers for the common Master, honouring and rendering the relevant veneration” (Synodical decisions of the seventh Ecumenical Synod).

Today our Holy Church celebrates in festivity the triumph of its healthy Orthodox faith, namely the restoration of the holy icons and the rendering of their relative veneration.

This event is a landmark in the history of the Church, which has been tested harshly and arduously by the enemies of the holy icons, who are known as “Iconoclasts”.

The iconoclasts were not against the icons, but against the veneration of the depicted face of the God-man Christ, our Saviour, as also against the saints of the Church.

In other words, the iconoclasts tried in a violent way to revive the known heresies of Arianism and especially of Nestorianism, which (heresies) distorted, and in essence denied, the great mystery of the incarnation of God the Word, our Saviour Jesus Christ.

Needless to say that the foundation of the Orthodox Christian faith is the “unity by hypostasis” of the divine with the human nature, according to Saint Cyril of Alexandria. And according to Saint Gregory the Theologian: “what has not been received is incurable; what however is united in God, this is which is saved”. And according to the hymn writer of the Church; “The uncircumscribed Word of the Father became circumscribed, taking flesh from thee, O Theotokos, and He has restored the sullied image to its ancient glory, filling it with the divine beauty. This our salvation we confess in deed and word, and we depict it in the holy icons” (Kontakion of Sunday of Orthodoxy Matins).

Righteously, therefore, the Church of Christ rejoices today and cries out: “The grace of truth has shone forth upon us; the mysteries darkly prefigured in the times of old have now been openly fulfilled. For behold, the Church is clothed in a beauty that surpasses all things earthly, through the icon of the incarnate Christ that was foreshadowed by the ark of testimony. This is the safeguard of the Orthodox faith; for if we hold fast to the icon of the Saviour whom we worship, we shall not go astray” (Glory of Vespers, Sunday of Orthodoxy).

Rendering glory and thanksgiving to our Holy Trinitarian God, let us  pray to the unchangeable icon of God the Father of our Saviour Christ, so that by the intersessions of His Immaculate Mother, our Lady Theotokos Mary and of all the Saints, we may be granted the great mercy. Amen. Many happy returns and blessed Great Lent.”

On Sunday evening the Contrite Vespers was held at the Catholicon of the Church of the Holy Sepulchre, with the participation of His Eminence Archbishop Theophanes of Gerassa, while Dragouman Archimandrite Mattheos delivered a Sermon to the congregation.