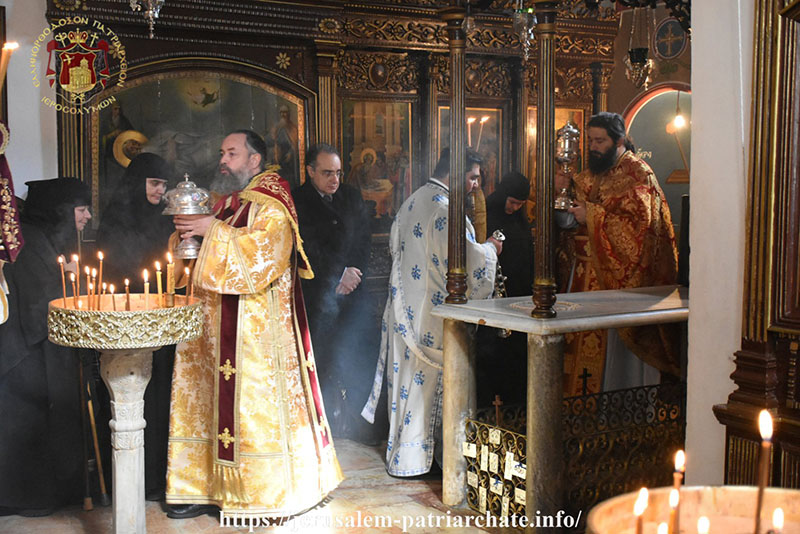 On Sunday, February 3/16, 2020, the Patriarchate celebrated the commemoration of Saint Simeon the God-receiver at the Holy Monastery dedicated to him, which is in New Jerusalem, near the Holy Monastery of the Sacred Cross and of the Hebrew Knesset.

On this feat the Church commemorates Saint Simeon the God-receiver, who received in his arms the forty-days-old Lord and cried out, “Lord, now lettest thou thy servant depart in peace, according to thy word: For mine eyes have seen thy salvation,  Which thou hast prepared before the face of all people;  A light to lighten the Gentiles, and the glory of thy people Israel” (Luke 2:29-32).

In this old Monstery, where St. Simeon’s Tomb lies, Vespers for the feast was held in the afternoon, by Archimandrites Mattheos and Ieronymos and the Divine Liturgy in the morning led by H.H.B. our Father and Patriarch of Jerusalem Theophilos, with co-celebrants their Eminences, Archbishop Methodios of Tabor, Metropolitan Panteleimon from Xanthi of the Church of Greece, and Metropolitan Joachim of Helenoupolis, Hagiotaphite Hieromonks and Arab-speaking Priests. The chanting was delivered by Mr. Vasilios Gotsopoulos and the service was attended by a congregation of local Orthodox Christians and pilgrims from Greece, Russia and Romania, as well as members of the Greek Consulate in Jerusalem.

His Beatitude read the following Sermon to this Congregation.

“The Elder, having seen with his eyes the salvation that was to come to the peoples, cried aloud unto Thee: ‘O Christ that comest from God, Thou art my God”. (Lord, when the Elder Simeon saw with his own eyes the Saviour that had come for all peoples, he cried aloud to you: Christ You are my God, the One Who has been born from God the Father, the melodist of the Church St. Cosmas Bishop of Maiouma exclaims).

The grace of the Holy Spirit which overshadowed Saint Simeon the God-receiver has gathered us all in this Holy place, where the Tomb and the honoured Saint lies, in order to celebrate in Eucharist the Meeting of our Lord Jesus Christ in the Temple, when Righteous Simeon received Him in his arms.

This feast of the Meeting of the Lord is a projection of Christmas, and this is so because God the Word who became incarnate from the pure Ever-Virgin Theotokos Maria, and was made a perfect man, was also following the Law of the Old Testament to the letter, according to the custom of the time.

According to the Law of Moses, the Lord said; “Sanctify unto me all the firstborn, whatsoever openeth the womb among the children of Israel, both of man and of beast” (Exodus 13:2, 12-13). And with their entry to the Temple after the completion of forty days since their labour, the women who bore children had to offer “a lamb of the first year for a burnt offering, and a young pigeon, or a turtledove, for a sin offering unto the door of the tabernacle of the congregation, unto the priest” (Leviticus 12:6); or in case of being poor, “two turtles, or two young pigeons; the one for the burnt offering, and the other for a sin offering” (Levit. 12:8).

Joseph and the Mother of Jesus, “when the days of her purification according to the law of Moses were accomplished, they brought him [Christ] to Jerusalem, to present him to the Lord” in Solomon’s Temple , where the righteous Elder Simeon received Jesus as a baby in his arms according to the witness of Luke the Evangelist (Luke 2:22-35).

Today, the Holy Orthodox Church and especially the Church of Jerusalem honours and venerates the synaxis of the Holy and Righteous Simeon the God-receiver and of Anne the Prophetess; because the pious and righteous Simeon recognized the incarnate Son and Word of God by the power of the Holy Spirit. “The same man (Simeon) was just and devout, waiting for the consolation of Israel: and the Holy Ghost was upon him. And it was revealed unto him by the Holy Ghost, that he should not see death, before he had seen the Lord’s Christ” Luke the Evangelist narrates (Luke 2:25-26).

According to Saint Basil the Great, Elder Simeon and Prophetess Anna saw the divine power in Christ “like light through light bulbs through the human body”. In other words, just as we see the light inside the light bulbs, likewise those who are pure in heart see and distinguish the divine light through Christ’s body. And according to Saint Athanasius the Great, while appearing to be a normal man, righteous Simeon was however a man of a higher status in meaning. He had the earthly and visible Jerusalem as a home city, but his metropolis was the heavenly Jerusalem.

This is theologically depicted in the hymn of Saint Cosmas Euhaiton by; “Thy virtue, O Christ, hath covered the heavens, for proceeding forth from the Ark of Thy sanctification, from Thine undefiled Mother, Thou hast appeared in the temple of Thy glory as an infant in arms, and the whole world hath been filled with Thy praise”.

According to the hymn writer Cosmas, the Theotokos Maria, being a new tabernacle “with a soul and logic”, according to St. John Damascene, held within her as a fetus the “sanctification”, namely “the holy body of the Lord, which was sanctified and deified by the divinity it had before it was conceived”. Therefore, “having come forth” from his immaculate mother, Christ appeared as a baby “in the temple of glory” “being brought into their arms”. “For while being God”, said John Damascene says, “he becomes a man…and is being held in the arms of men as a baby”.

And the “earthly arms” are those of the Elder Simeon. St. Luke the Evangelist says that Simeon “then took he him up in his arms, and blessed God, and said, Lord, now lettest thou thy servant depart in peace, according to thy word: For mine eyes have seen thy salvation, Which thou hast prepared before the face of all people; A light to lighten the Gentiles, and the glory of thy people Israel” (Luke 2:28-32).

The gift of prophesy St. Simeon had enabled him to foresee that this baby, Christ, was to be the Saviour of the whole world, as Prophet Isaiah also said: “And all flesh shall see the salvation of God” (Luke 3:6). And according to the psalmist; “The Lord hath made known his salvation: his righteousness hath he openly shewed in the sight of the heathen” (98:2).

The apostolic reading of the main feast is related to the event of today’s feast. “And without all contradiction the less is blessed of the better” (Hebrews 7:7), St. Paul preaches, referring to the meeting of Patriarch Abraham with Melchisedek, the King of Salem and priest of God (Genesis 14:18-20). This is precisely what happened with the meeting of the baby Christ by the Elder Simeon. The eternal and Great High Priest Jesus Christ as a forty-day-old child is met with Elder Simeon in the temple and just like Abraham was blessed by Melchisedek, likewise, Simeon is being blessed by the Lord as he received Him in his arms (Luke 2:28).

In other words, the pious Simeon realized that this divine child is above him, while he is below, and rejoicing he cried out “Lord, now lettest thou thy servant depart in peace” (Luke 2:29).

If we want, my dear brothers and sisters, to become communicants of the blessing that the righteous Simeon received, we should have as a prototype the faith and the desire, along with the patience he had, when we approach the Lord of glory, namely our Lord Jesus Christ, in the mystery of the Holy Eucharist, where we become of one body and of one blood with our God and Saviour.

And along with the hymn writer let us say: “Come let us as well with songs inspired of God, go together to meet Christ; and receive Him Whose salvation Simeon hath now beheld. This is He Whom David proclaimed; this is He that in the Prophets hath spoken; Who is incarnate for our sakes, and Who speaketh in the Law. Let us worship Him” (Minaion 2 February, Great Vespers, Sticheron 3). Amen.”

After the Divine Liturgy the renovator of the Holy Monastery and the Church Elder Archimandrite Theodoritos offered a reception to the Patriarchal entourage at the Hegoumeneion and to the congregation at the courtyard of the Monastery.