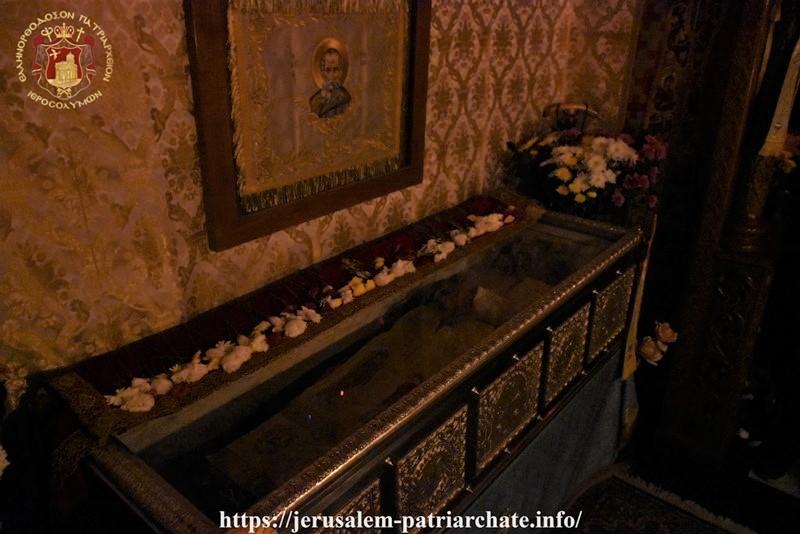 THE FEAST OF ST. SAVVAS THE SANCTIFIED AT THE PATRIARCHATE

On Wednesday, December 5/18, 2019, the Patriarchate celebrated the commemoration of our Holy Father Savvas the Sanctified, at the Lavra founded by him in the Judea desert, further beyond Bethlehem and Beit Sahour, on the right bank of Brook Kedron, which flows towards the Dead Sea.

This Monastery was founded by St. Savvas, after his arrival from his hometown Moutalaski of Cappadocia in the Holy Land in 456 A.D. and having first been taught the monastic life by St. Euthymius the Great and St. Theoktistos.

During St. Savvas’ lifetime and after his repose this Lavra became a monastic centre of Orthodoxy and all Christianity, as well as a centre of St. Savvas’ ascetic striving in the Holy Land, and of his co-patriot and contemporary and friend, St. Theodosios the Cenobiarch, for the prevailing of the Doctrine of the 4th Ecumenical Synod of Chalcedon regarding the one hypostasis of Christ in two natures.

Since 1965, the sacred relic of St. Savvas has been kept in the Lavra, as a blessing and encouragement of those who venerate it.

In this historic Monastery, St. Savvas was honoured on this day with an All-night Vigil, officiated by H.H.B. our Father and Patriarch of Jerusalem Theophilos, with co-celebrants the leading Archbishop of the Vespers Vigil, Most Reverend Metropolitan Joachim of Helenoupolis, the Secretary-General, Most Reverend Archbishop Aristarchos of Constantina, the Most Reverend Archbishop Isidoros of Hierapolis, Hagiotaphite Hieromonks, with first in rank the Hegoumen of Beit Jalla Archimandrite Ignatios, Arab-speaking Priests, Archdeacon Mark, and Hierodeacon Simeon. The chanting was delivered by Mr. Balagiorgos choir on the right in Greek, with the help of His Eminence Archbishop Aristovoulos of Madaba and the Patriarchal School of Zion students, and the on the left in Arabic by the choir under the lead of the Patriarchal Representative in Arce-Ptolemais Archimandrite Philotheos. The Vigil was attended by pilgrims and local faithful from Bethlehem, Beit Jalla and Beit Sahour, along with the Consul General of Greece in Jerusalem Mr. Christos Sophianopoulos.

“For better is one day in Thy courts than thousands elsewhere. I have chosen rather to be an outcast in the house of my God than to dwell in the tents of sinners” (Psalm 83:10).

The grace of the All-holy Spirit has gathered us all in this holy place of the desert in order to festively honour the holy and sacred commemoration of our Holy Godly-minded Father Savvas the Sanctified.

Becoming a citizen of the desert in Palestine, our Holy Father Savvas proved to be “a peer of angelkind, a dweller with the saints in the heights, a companion of the prophets, a joint heir with the apostles and the martyrs”, always paying heed to St. Paul’s advice: “           For our conversation is in heaven; from whence also we look for the Saviour, the Lord Jesus Christ: Who shall change our vile body, that it may be fashioned like unto his glorious body, according to the working whereby he is able even to subdue all things unto himself” (Phil. 3:20-21).

Having striven next to great and God-bearing teachers in the monastic Lavrae of the Judea and Jordan deserts, and having been taught the spiritual manner of living, with the power of our God and Saviour Jesus Christ he accomplished  “to change his vile body and fashioned it like unto the Lord’s glorious body” the body of the crucified and resurrected Christ.

A true witness of this fact is the herein kept and venerated incorrupt relic of the Saint; the fragrant relic of our Sanctified Father Savvas, who was received by the Lord “unto his heavenly kingdom” (2 Tim. 4:18), “         dwelling in the light which no man can approach unto” (1 Tim. 6:16).

The heavenly kingdom of Christ and the unapproachable light is being witnessed and evangelized by the Holy Church of us Orthodox Christians, who make its God-man body in the world, the body of our Lord Jesus Christ. Because according to St. Paul, He is the head of the body of the Church; “And he is the head of the body, the church: who is the beginning, the firstborn from the dead; that in all things he might have the preeminence. For it pleased the Father that in him should all fulness dwell; And, having made peace through the blood of his cross, by him to reconcile all things unto himself; by him, I say, whether they be things in earth, or things in heaven” (Col. 1:18-20).

Behold therefore, why David exclaims; “Bring unto the Lord, ye sons of God, bring unto the Lord glory and honour. Bring unto the Lord the glory due unto His Name, worship the Lord in His holy court” (Psalm 28:1-2). And the crowd of angels began to praise God and say; “Glory to God in the highest, and on earth peace, good will toward men” (Luke 2:14). And in more detail, glory to God in the highest places of heaven by the angels dwelling therein; and may peace reign to the whole of the earth, which is disturbed by sin and its violent passions; because God has manifested brightly His favour and goodwill to men through the incarnation of His Son.

Our Holy Father Savvas became a communicant of this divine peace, as did all the saints of Christ, “for He [Christ] is our peace” (Eph. 2:14). This peace of the incarnate Word of God, of Christ the Son of God who was born in the cave of Bethlehem from the pure blood of the Most Blessed Theotokos and Ever-Virgin Mary, is being evangelized today by our honoured Father Savvas, the vessel of the Holy Spirit.

Let us entreat our Holy Father Savvas the Sanctified, and along with the hymn writer say; “Do thou entreat Christ, do thou plead with Christ, O righteous one, that the Church may be granted concord, tranquility, great mercy and lasting unity”. And deem us who honour you worthy celebrate in peace and repentance the divine Nativity of our God and Saviour Jesus Christ. Amen! Blessed Christmas!

The Divine Liturgy was followed by a reception and a meal, and the Patriarchal Entourage returned to Jerusalem having first stopped by the Monastery of St. Theodosios the Cenobiarch.

In St. Savvas honour the Divine Liturgy was also celebrated at the Holy Chapel dedicated to him in the H. Monastery of the Archangels in the Old City of Jerusalem, by Archimandrite Stephen, with the care of the Hegoumen Most Reverend Archbishop Demetrios of Lydda.