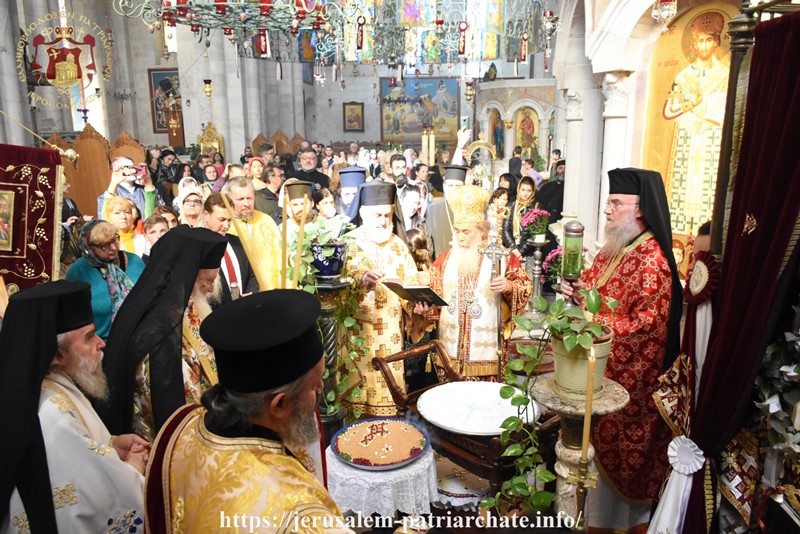 The commemoration of the New Holy Hieromartyr Philoumenos was celebrated on Friday November 16/29, 2019 at Jacob’s well, the place of his martyrdom. When he suffered a martyr’s death he was the Hegoumen there and the current Hegoumen, Fr. Ioustinos has constructed a magnificent Church dedicated to St. Foteini the Samaritan Woman – as this is the place where she met the Lord.

St. Philoumenos’ martyrdom was validated by the Patriarchate of Jerusalem with its Synodical Act in the year 2009. In this Holy Church which is built above the chapel with the well, the Divine Liturgy on the day the Saint martyred, on 16/29 November 1979, was officiated by H.H.B. our Father and Patriarch of Jerusalem Theophilos, with co-celebrants the Most Reverend Metropolitan Kyriakos of Nazareth, the Most Reverend Archbishops; Aristarchos of Constantina and Theophylactos of Jordan, His Eminence the Metropolitan Joachim of Helenoupolis, Hagiotaphite Hieromonks among who were; the Hegoumen of Beit Jala Archimandrite Ignatios, the Archimandrites; Makarios and Leontios, Fr. Kyriakos and Arab-speaking Priests. The chanting was delivered by Mr. Vasilios Gotsopoulos in Greek on the right and the Rafidia Community Choir in Arabic on the left, as the service was attended by a contrite congregation of local faithful and pilgrims from Greece, Romania, and Russia.

“O send out thy light and thy truth: let them lead me; let them bring me unto thy holy hill, and to thy tabernacles” (Psalm 43:3) the psalmist proclaims.

The grace of the Holy Spirit has gathered us all in this sacred place of Patriarch Jacob’s well, where our Lord Jesus Christ told the Samaritan Woman; “God is a Spirit: and they that worship him must worship him in spirit and in truth” (John 4:24), in order to honour in Eucharist the commemoration of the New Martyr of the Church of Jerusalem St. Philoumenos the Hagiotaphite.

Christ’s light and His truth guided and brought young Philoumenos from the island of Cyprus “on a holy mountain and in the dwelling places of God the Word” in the Holy City of Jerusalem, where he joined the Monastic Order of the Studious Ones, namely of the Hagiotaphite Brotherhood which ministers the All-holy Shrines, which witness the martyrdom on the Cross of the “leader of our faith” (Hebrews 12:2) and “of [our] life” (Acts 3:15).

Hieromonk Philoumenos worked as a shepherd and with boldness for the gospel of Christ in all ministries appointed to him, in the Monastic centre of the Patriarchate and in the various villages and towns of its jurisdiction, hearkening to St. Paul’s advice; “For God hath not given us the spirit of fear; but of power, and of love, and of a sound mind. Be not thou therefore ashamed of the testimony of our Lord…, who hath abolished death, and hath brought life and immortality to light through the gospel” (2 Tim. 1:7-10).

And indeed, our Holy Father Philoumenos was not ashamed of the martyrdom of our Lord Jesus Christ, during his ministry in this sacred Shrine, imitating St. Foteini, the Samaritan Woman, who became a martyr and equal to the apostles in the preaching of the gospel of Christ.

The fervent love towards God filled our Father Philoumenos with a spirit of power and love but also of wisdom, therefore he did not flinch preaching the witness and the preaching of the crucified Christ, “ unto the Jews a stumblingblock, and unto the Greeks foolishness” (1 Cor. 1:23) according to wise Paul.

The “revelation of the mystery, which was kept secret since the world began” (Romans 16:25) of the incarnation of God the Word and our Saviour Jesus Christ, my dear Brothers and Sisters, is the one which the holy calling and Christ’s grace revealed to us, and abolished the death of corruption and sin. Moreover, it brought to light the life and incorruption with the preaching of the gospel, as St. Paul preached; “Who hath saved us, and called us with an holy calling, not according to our works, but according to his own purpose and grace, which was given us in Christ Jesus before the world began, but is now made manifest by the appearing of our Saviour Jesus Christ, who hath abolished death, and hath brought life and immortality to light through the gospel” (2 Tim. 1:9-10).

In other words, Christ revealed to us the death of eternal life, namely the death of incorruption, through His resurrection, as Theophylactos the interpreter says; “in His own body He [Christ] actively abolished death, making it [His body] incorrupt. For this reason His holy martyrs became communicants and participants of Christ’s death, namely of His eternal Kingdom. According to St. Chrysostom; “Christ lives and works in the souls of the martyrs”.

The genuine martyr of Christ’s blood is distinguished for his perfect love, as Clement of Alexandria says; “we call martyrdom an accomplishment, not because the man came to the end of his life, as the rest [of the people], but because he has accomplished the perfect work of love”. It is precisely this perfect work of love that today’s honoured martyr St. Philoumenos accomplished. And “his perfect work of love in Christ” was sealed with his confession to God that the Messiah is Christ. This confession was done in this Jacob’s well as witnessed by St. John the Evangelist; “The woman saith unto him, I know that Messiah cometh, which is called Christ: when he is come, he will tell us all things. Jesus saith unto her, I that speak unto thee am he” (John 4:25-26).

St. Philoumenos manifested again this “perfect work of love” though his martyr’s death, hearkening to the Lord’s words; “Also I say unto you, Whosoever shall confess me before men, him shall the Son of man also confess before the angels of God” (Luke 12:8). This means that becoming one among the cloud of the martyrs of the Church, our Father Philoumenos did not find the confession of his Christian faith enough, but he was “planted together in the likeness of his death” (Romans 6:5), namely of Christ.

Today’s commemoration of Hieromartyr Philoumenos in this very place of his martyrdom proves that the Church of Christ is not a worldly institution but the God-man mystical body of Christ who was crucified and resurrected for us and said; “Verily, verily, I say unto you, He that heareth my word, and believeth on him that sent me, hath everlasting life, and shall not come into condemnation; but is passed from death unto life” (John 5:24), “ I am the resurrection, and the life” (John 11:25), “I am the light of the world: he that followeth me shall not walk in darkness, but shall have the light of life” (John 8:12).

To follow Christ, my dear ones, means to be in communion of faith, as much as in communion of life and participation in His passion, in co-suffering with Him, according to the glorious example of our Holy Hieromartyr Philoumenos the Hagiotaphite.

Let us thank our Lord God Who glorified St. Philoumenos who glorified Him, who we now entreat, along with our Most Blessed Lady and Ever-Virgin Mary to intercede to our God and Saviour Christ for our souls. And along with the hymn writer let us say; “the law of the praises is being defeated by the magnitude of your feats; the Master Christ alone glorifies you with the divine splendour; fervently entreat Him for those who praise you in faith”. Amen! Many happy returns!”

After the Divine Liturgy the Hegoumen and renovator of the Monastery and founder of the new Church of St. Foteini offered a reception at the Hegoumeneion and later a meal at lunch time.