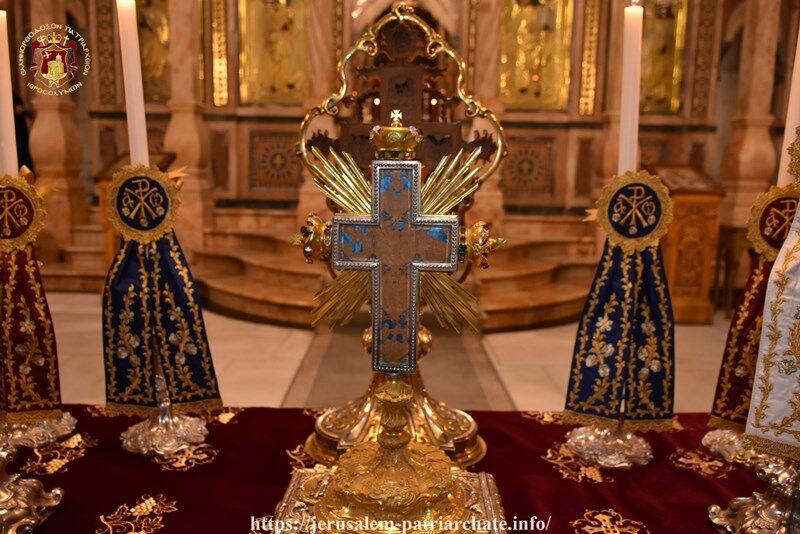 DOXOLOGY FOR THE NATIONAL ANNIVERSARY OF 28TH OCTOBER

The Doxology at the Catholicon of the Church of the Holy Sepulchre for the National Anniversary of 28th October 1940 took place on Monday, October 15/28, 2019.

This Doxology was a thanksgiving to God for His aid in the liberation of our nation from the Italian threat and the German yoke of occupation in the years 1940-1944, and as a prayer for the repose of the souls of our fathers who fought, sacrificed themselves and gloriously fell in the battlefields.

The Doxology was officiated by H.H.B. our Father and Patriarch of Jerusalem Theophilos with the participation in prayer of the Archbishops and Priests Hagiotaphite Fathers, at the chanting of the Novice Monk Constantinos Spyropoulos, at the presence of the Consul General of Greece in Jerusalem Mr. Christos Sophianopoulos and members of the Greek Consulate, as well as members of the Greek Community and the Arab-speaking flock of the Patriarchate.

After the Doxology, bells tolling, the Patriarchal Entourage returned to the Patriarchate Headquarters, where there was a short reception with reciting of poems by the students of St. Demetrios School of the Patriarchate and the National Anthem, followed by His Beatitude address as below;

Today’s anniversary of 28th October 1940 is a remembrance of a great and wondrous action for humankind, and especially for the Greek nation, because the epic of “No” was crucial for the outcome, namely the defeat, of the moral and physical instigators of the devastating World War II.

The recognized by all heroic resistance of the Greek warriors against the marching of the enemy forces of Axis, proved that the nation of the Greeks is governed by native moral and spiritual principles, of both their cultural heritage and Orthodox Christian faith with the tradition of the Holy Fathers.

Faith in righteousness, love for the country, self-sacrifice and especially the dignity of man for the non-negotiable principles of freedom, justice and national independence prevailed over the insanity and wrathful aggressiveness of the Nazi atrocity in the sacred fight of the safeguarding of the national borders and the defense of the territorial integrity of the country.

The “No” of 28th October 1940 was not only the negative answer to the insulters and arrogant treacherous cosmocrats, but mainly to their morbid ideology, namely to the totalitarianism, to fascism and to Nazism.

The Venerable Hagiotaphite Brotherhood, honouring as it should the epic of 1940, and wholeheartedly participating in this victorious commemoration of freedom, after the crushing of the relentless occupation of Nazism, came down to the Church of the Holy Sepulchre, for the thanksgiving Doxology to our Lord and Saviour Jesus Christ, the Crucified and Resurrected.

Moreover, we have prayed for the eternal repose of the souls and everlasting remembrance of our fathers and brothers who fought and gloriously fell in the fight for our faith, country and freedom.

This very faith in the light of God the Word, Christ, has established the epic of 1940, and we are called to preserve it as a sacred consignment for the generations to come.

For all these, allow Us to raise our glass in a toast and cry out:

Long live the “NO”

Long live the noble nation of the Rum Orthodox!

And the Consul General’s address as follows:

We celebrate today a leading event of the modern Greek history. The unanimous rejection by Hellenism on 28th October 1940 of the ultimatum for the unconditional surrender of the Homeland and the concession of its national sovereignty. We celebrate the heroic and unequal struggle for the defense of Greece’s freedom and territorial integrity during World War II, which began with the epic of Pindos. Today is a day of honour and remembrance for all Greeks.

This historical NO demonstrated the moral stature, the love for freedom and the strong sense of justice of the Greeks. Thanks to this code of principles, they opposed overwhelmingly superior forces: the dark fiber forces of fascism and Nazism that sought to impose the bond of totalitarianism and racism on the peoples of Europe and beyond. The sense of justice shielded the Greeks, who, knowing that they fought in fair struggles for their freedom, achieved their first victory against the Axis, sending a message of hope to the other peoples of Europe and delaying the implementation of their more general strategic plan, contributing this way in the final victory of the Allies.

The “NO” showed in the clearest way the common, deep historical consciousness of the Greeks, that fueled and reinforced the patriotism, the vigor, the self-esteem and the great sense of responsibility with which the sacred and the holy were defended. The “No” was precisely the refusal of the Greek people to forget their history and live a petty and submissive life. Today, all Greeks, wherever we are, pay tribute to the fallen and the fighters in the battlefields of 1940-41 in Pindos, in the Macedonian forts, in our seas, in Crete and elsewhere. We honour those who participated in the National Resistance and those who continued to fight, on the side of the Allies, in the battlefields of World War II, the Middle East and Europe. Today we do not forget the hundreds of thousands innocent victims of the Occupation.

In the national heroic effort that began on October 28, 1940, as in any other national endeavor, the dynamic participation and valuable contribution of the Hellenism of the diaspora was crucial. Greece is very proud and grateful for the great contribution of the Greek community in the Middle East and especially of the Hellenism of Jerusalem, which is historically recorded.

Responding to the need to unite all the forces of the Nation, the Patriarchate of Jerusalem, the Mother of Churches, was then and always remains, a key point of reference, the guardian of the moral authority and spiritual merit of our Orthodox faith and proof of unchanging survival potential of the Greek Orthodox tradition, which is a source of strength, inspiration and hope for the future for all of us.

The anniversary of October 28, 1940 has always been and is even more present today, especially for the new generation which needs to understand and embrace its lessons. In an international environment characterized by extensions, disputes and conflicts, often fueled from dark ideologies and distorted attitudes, as in the pre-war period, we, as Greeks, have the responsibility of preservation of our national unity and unanimity of soul, our commitment to the ideals of freedom and democracy, our inspiration from the moral and spiritual values of our Orthodox faith, and our alertness and determination to cope with all kinds of challenges.