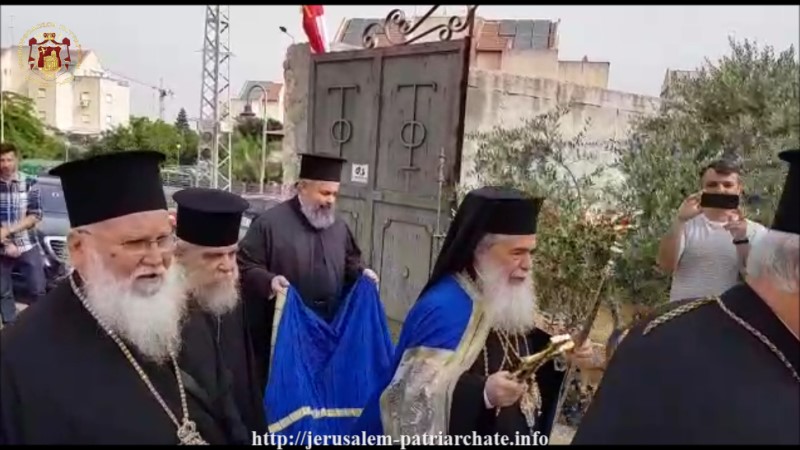 The Divine Liturgy on the commemoration of the Holy Fathers of the First Ecumenical Synod in Nice in 325 A.D. was officiated by His Beatitude, with co-celebrants the Most Reverend Metropolitan Kyriakos of Nazareth, the Most Reverend Archbishop Aristarchos of Constantina, the Most Reverend Archbishop Theophylactos of Jordan, the Hegoumen of the H. Monastery of St. Charalambos in Jerusalem, Archimandrite Kallistos, the Hegoumen of the H. Shrine in Cana, Archimandrite Chrysostom, the Russian-speaking Priest of the parish Hieromonk Sergios, Priest Simeon and other Priests and Archdeacon Mark. The parish choir chanted in Russian and the service was attended by a large number of faithful from this town of Midgal Ha-emek.

His Beatitude spoke to this congregation as follows;

“These words spake Jesus, and lifted up his eyes to heaven, and said, Father, the hour is come; glorify thy Son, that thy Son also may glorify thee: As thou hast given him power over all flesh, that he should give eternal life to as many as thou hast given him. And this is life eternal, that they might know thee the only true God, and Jesus Christ, whom thou hast sent” (John 17:1-3).

The grace of the Holy Spirit has gathered us all in this Holy Church of St. Nickolaos in town Moundejel, in order to celebrate in Eucharist and thanksgiving the annual commemoration of the 318 God-bearing Fathers of the First Ecumenical Synod in Nice (in 325 A.D.), with you, the Russian-Speaking and inseparable member of the body of the Church of Jerusalem.

Our Holy Orthodox Church especially honours the commemoration of the 318 Holy Fathers, because they were not only established as genuine vessels of the Holy Spirit, but also as true teachers and shepherds of the world, hearkening to St. Paul’s wise advice; “Take heed therefore unto yourselves, and to all the flock, over the which the Holy Ghost hath made you overseers, to feed the church of God, which he hath purchased with his own blood. For I know this, that after my departing shall grievous wolves enter in among you, not sparing the flock” (Acts 20:28-29).

The grievous wolves are no others than the known leaders of the heresies of Arianism, Nestorianism, Monothelitism and many other similar distorted teachings, as St. Paul foresaw by saying; “Also of your own selves shall men arise, speaking perverse things, to draw away disciples after them” (Acts 20:30).

The Holy God-bearing Fathers of the Church are those who kept the consignment, namely the truth of the Gospel, exactly as they received it from the Holy Apostles, “avoiding profane and vain babblings, and oppositions of science falsely so called” (1 Tim. 6:20).

The truth of the Gospel refers to eternal life; it is the knowledge of the true God, the Son of God and our Lord Jesus Christ, as He Himself says; “And this is life eternal, that they might know thee the only true God, and Jesus Christ, whom thou hast sent” (John 17:3).

Explaining the phrase “eternal life”, Christ defines what it means, and which is the way or the means to accomplish it. Interpreting these words of the Lord, St. Cyril of Alexandria says; “He defined faith through the power of the true knowledge of God as mother of the eternal life… And life is the knowledge, as the completion of the power of the mystery and the one which brings forth the mystical blessing of the communication between the human world and the supernatural one, through which, we are united with the living and life-giving Word.”

In other words, by dear brothers and sisters, the knowledge of the true God means that we should have a personal knowledge of God the Father and His Son the Christ, just as we personally know people with whom we live together or are in close communication.

This very personal knowledge did the Holy Apostles gain, by becoming disciples and friends of Christ, hearkening to His advice; “Ye are my friends, if ye do whatsoever I command you” (John 15:14).

This consignment of the knowledge of the true God is being preached, evangelized and witnessed throughout the centuries by the Holy Church of Jerusalem, to every man “whosoever will save his life” (Matt. 16:25).

As in the past, “By faith Noah, moved with fear, prepared an ark to the saving of his house; by the which he condemned the world” (Hebrews 11:7), likewise Christ, prepared His Church for our salvation, founding it on the redeeming blood of His crucifixion on the Horrendous Golgotha. For this reason the Church of Jerusalem does not have national borders. The “national” borders of the Church of Jerusalem are; the place of the incarnation of God the Word, namely of the Nativity of Christ from the pure blood of the Ever-Virgin Mary in Bethlehem, of His baptism in the river Jordan, of His Crucifixion on the place of skull, the Golgotha, and of His three-day burial and Resurrection in Jerusalem.

Our Holy Church of Jerusalem was made by our Lord and Saviour Jesus Christ Himself the inexhaustible fountain, namely the place of the Holy Pentecost, during which the Holy Spirit came down to the Apostles as “tongues of fire” while they “were all with one accord in one place” (Acts 2:1-2). “And there were dwelling at Jerusalem Jews, devout men, out of every nation under heaven” (Acts 2:5) as St. Luke the Apostle and Evangelist says.

This reality “out of every nation under heaven” (Acts 2:5) of the existing Orthodox Christians is being ministered liturgically by the Church of Jerusalem, which is in essence the “good olive tree”  to which “the natural branches”, namely our brothers of the same doctrine “are grafted into their own olive tree” (Romans 11:24) as St. Paul preaches.

Today my dear brothers and sisters, we have come as the good shepherd to the courtyard of our own flock, in order to declare the unity of our faith and the community of the Holy Spirit.

Let us entreat today’s honoured Saints and God-bearing Fathers of the First Ecumenical Synod in Nice, so that along with the Most Blessed Theotokos and Ever-Virgin Mary they may intercede our God and Saviour for the salvation of our souls.

And let us say along with St. Paul: “And now, brethren, I commend you to God, and to the word of his grace, which is able to build you up, and to give you an inheritance among all them which are sanctified” (Acts 20:32) and in more detail; and now, I entrust you, my brothers, into God and into the Word which His grace has revealed to us, and Which Word will protect you from every fallacy and distortion of faith. I entrust you in God, Who is able to continue your progress in development and give you as an inheritance among all those who progressed towards their sanctification which they received through Jesus Christ. Amen.

After the Divine Liturgy the Community offered a reception to the Patriarchal Entourage at the courtyard of the Church.