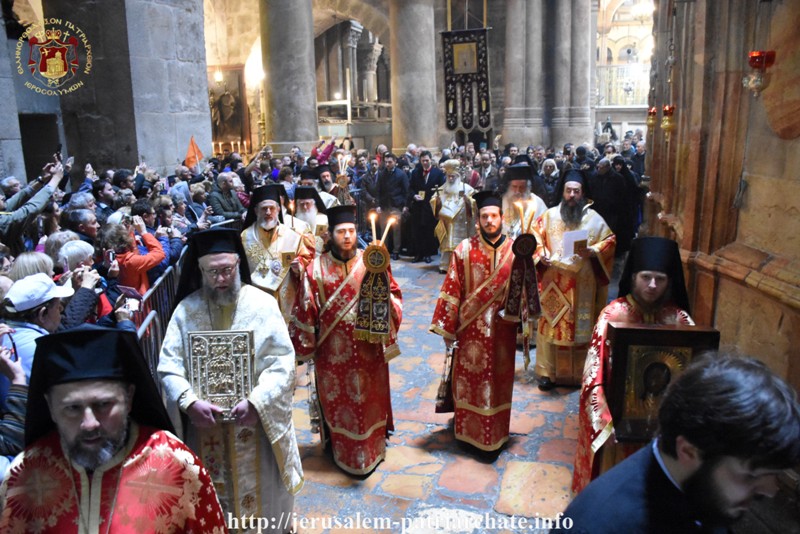 THE SUNDAY OF ORTHODOXY AT THE PATRIARCHATE

On Sunday March 4/17, 2019, the Sunday of Orthodoxy was celebrate by the Patriarchate at the Church of the Holy Sepulchre.

On this First Sunday of the Holy and Great Lent, the Church celebrates the triumph of the Restoration of the holy Icons by the Emperor Mihail and his mother St. Theodora and by the Patriarch St. Methodios the Confessor, after one a half centuries of persecution and destruction of the icons by the iconoclasts.

On this feast the Church commemorates the defenders of the holy icons, reverend Patriarchs, Hierarchs, Kings and faithful Christians, as witnesses of the incarnate presence of our Lord Jesus Christ on earth.

This event which has been identified with Orthodoxy and confirmed by the 7th Ecumenical Synod in 787 A.D. was celebrated by the Church of Jerusalem with Vespers in the evening at the Catholicon of the Church of the Resurrection with the veneration and the incense offering at the Holy Deposition, veneration at the Holy Tomb, veneration at the Horrendous Golgotha, Great Entrance and the Blessing of Bread and incense offering, officiated by our Father and Patriarch of Jerusalem Theophilos, with the participation in prayer of the Archbishops of the Throne, and the members of the Holy Synod, and with the co-celebration by the Hagiotaphite Priests and deacons. The chanting was delivered by the Choir leader Mr. Constantinos Spyropoulos and the service was attended by a large congregation of pilgrims.

The Divine Liturgy was celebrated at the Catholicon of the Church of the Resurrection on the day of the feast, officiated by His Beatitude our Father and Patriarch of Jerusalem Theophilos, with co-celebrants the Most Reverend Metropolitan Isychios of Kapitolias, the Most Reverend Archbishops; Aristarchos of Constantina, Theodosios of Sebastia, Demetrios of Lydda, Makarios of Qatar, the Most Reverend Metropolitan Joachim of Helenoupolis, and Hagiotaphite Priests, with first in rank the Elder Kamarasis Archimandrite Nectarios. The chanting was delivered by the Choir Leader Mr. Constantinos Spyropoulos and the service was attended by the Consul General of Greece Mr. Christos Sophianopoulos and a large crowd of faithful Christians and pilgrims.

The Divine Liturgy was followed by the litany of the Holy Icons three times around the Holy Tomb and around the shrines and concluded with the reading of the Synodikon of Orthodoxy and of Triodion.

Afterward the festal return to the Patriarchate Headquarters took place under the sound of bells tolling, where all present paid their respect to His Beatitude and He addressed them as follows;

“The grace of truth has shone forth upon us; the mysteries darkly prefigured in the times of old have now been openly fulfilled. For behold the Church is clothed in a beauty that surpasses all things earthly” our Father among the Saints Theodore of the Studion says.

Today our Holy Orthodox Church commemorates the restoration of the holy icons which was done by the memorable and noble Emperor of Constantinople Mihail and his mother Theodora, during the Patriarchal office of St. Methodios the confessor.

The iconoclast heresy, namely the opposition against the veneration of the holy icons, revived the condemned heresy by the Holy Ecumenical Synods of Arianism and Nestorianism, which denied the divinity of the human nature of our Lord Jesus Christ who became incarnate through the Theotokos and Ever-Virgin Mary.

Behold why St. Theodore of the Studion says: “the Church is rejoicing in acceptance of the garment of her nudity”. And the garment of the nudity that the Church accepted is the hypostatic unity of God the Word with our human nature which He received by the Holy Spirit, according to St. Cyril of Alexandria.

The great and unexplained mystery of the divine providence, namely the incarnation of God the Word, is the unbreakable foundation of the Christian teaching, especially of our Orthodox faith, as this is witnessed by the Apostles and Evangelists, as St. John the Theologian says; “And the Word was made flesh, and dwelt among us, (and we beheld his glory, the glory as of the only begotten of the Father,) full of grace and truth’ (John 1:14). And elsewhere he says; “That which was from the beginning, which we have heard, which we have seen with our eyes, which we have looked upon, and our hands have handled, of the Word of life” (1 John 1:1).

Truly my dear brothers, today the divine grace was shown in the universe, because Christ the Word, the new Adam, gave his own garment to the Church. “Celebrate, rejoice O Christian people of the Lord, seeing the Church once again illumined by the goodness of the divine form; in which God was clad and became human in order to save us” the hymn writer of the Church proclaims.

In other words, the depicting or the description of the incarnate Divine Word refers to his human form and is in his divinity. “God the Word was made poor, and hungered, and thirsted, and these are characteristics of the human nature, by which he is being described; While He (God the Word) is simple in his divine form and indescribable” St. Theodore of the Studion says. “Who is able to imitate God the invisible and bodiless and indescribable and with no form? For it is the outmost insanity and irreverence to give form to the divine” St. John of Damascus teaches.

Giving heed to the holy ecclesiastical tradition and teaching of the holy Apostles and Fathers, we, my brothers do not venerate neither worship the matter, that is the icon per se, but the prototype, that is the image that is being depicted, as St. Basil the Great says: “The honour of the icon goes to the prototype”. We venerate and kiss the holy icons relatively, not in worship, neither as if they are gods, but as images of the archetype. Moreover, through the holy icons the eyes of those who see them are being sanctified and through them [the icons] the mind is lifted up towards the knowledge of God.

Having confessed in thanksgiving this faith at the Church of the Holy Sepulchre, let us entreat our God and Saviour that we may deemed worthy to reach His three-day Resurrection. And let us say along with the hymn writer:“The uncircumscribed Word of the Father became circumscribed, taking flesh from thee, O Theotokos, and He has restored the sullied image of its ancient glory, filling it with the divine beauty. This our salvation we confess in deed and word, and we depict it in the holy icons”. Amen.