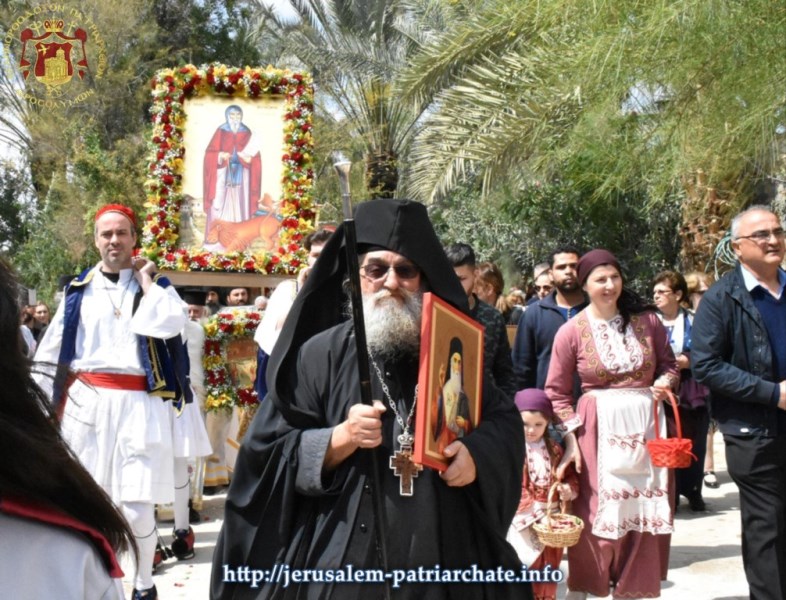 THE FEAST OF ST. GERASIMOS OF THE JORDAN AT THE PATRIARCHATE

On the Sunday of Orthodoxy, March 4/17, 2019, the Patriarchate celebrated the commemoration of our Righteous Father Gerasimos of the Jordan his Holy Monastery at the west bank of the River Jordan, before its estuary towards the Dead Sea.

St. Gerasimos lived in the 5th century A.D., came to the Holy Land from Lycia of Asia Minor and was a contemporary ascetic of St. Euthymius the Great and St. Kyriakos the anchorite. He denied the heresy of Monfysiticism, led many monks to the monastic perfection in Christ and was deemed worthy of the gift of working miracles.

Honouring his commemoration, in the aforementioned Holy Monastery Vespers was held in the evening, an all-night Vigil, while the Divine Liturgy was also celebrated on the day of the feast, led by the Most Reverend Archbishop Theophanes of Gerassa, with co-celebrant Hagiotaphite Hieromonks and Priests from other Churches form Greece and Cyprus. The chanting was delivered by the Hegoumen Archimandrite Chrysostom and pilgrims from Greece and Cyprus, while the service was attended by a very large congregation of local faithful and pilgrims who venerate the Saint.

His Eminence spoke to this congregation on the importance of the Sunday of Orthodoxy and of the conscious mystical life of the faithful, especially on this period of the Holy and Great Lent.

The Divine Liturgy was followed by a procession of the icons and of the icon of St. Gerasimos around the Holy Monastery, and concluded with a rich fasting meal by the hospitable and hard-working Hegoumen Archimandrite Chrysostom.