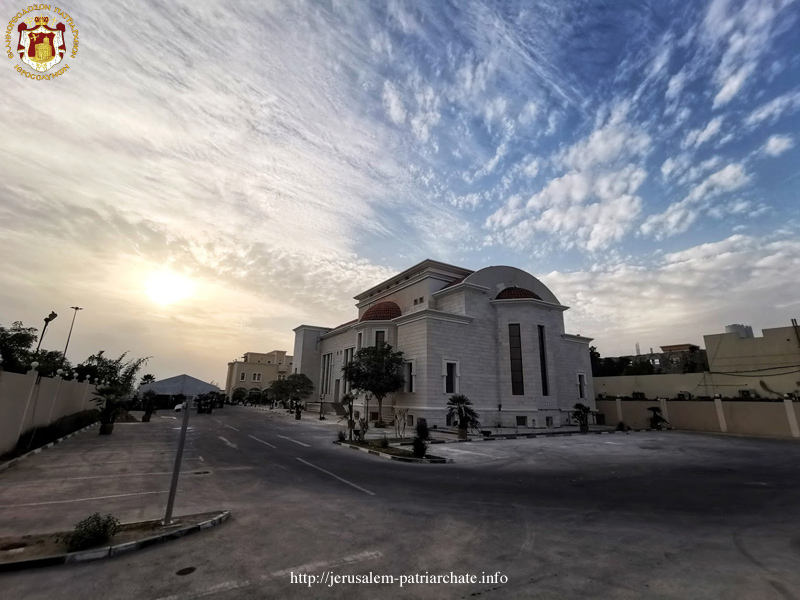 THE CONSECRATION SERVICE OF THE H. CHURCH OF ST. ISAAC THE SYRIAC & ST. GEORGE THE TROPHY-BEARER IN DOHA

On Friday, February 9/22, 2019, the consecration service of the Holy Church of St. Isaac the Syriac and the Holy Glorious George the Great Martyr and Trophy-bearer, along with St. Makarios the Patriarch of Jerusalem was held as described below.

It is befitting to refer to a few things related to the history of this Church, before the consecration details are mentioned.

The memorable Patriarch Diodoros I was the first to visit Qatar in 1990, as it belonged to the border of the jurisdiction of the Jerusalem Patriarchate in the Arabic peninsula. The Patriarch was then received by the Emir of that time, Prince of Qatar Hamed Bin Khalifa Al Thani.

This visit was followed by a delegation under the command of Patriarch Diodoros, with the current Patriarch of Jerusalem Theophilos, who was then Archimandrite Theophilos, after the petition of the Ambassador of the U.S.A. at that time, Mr. Patrich Theros, in order to officiate the Services of Easter for the small Greek community, at a hall of the American Embassy, as there was no Holy Church for the Christians in Qatar.

Following this, there were subsequent petitions to the Government of Qatar to provide the construction permit of a Holy Church in Doha, the capital of Qatar, by the Patriarchate.

The Government of Qatar granted this request and offered a piece of land to the Patriarchate in Doha, not as its own property, but only for the use of the land. The construction of this consecrated Holy Church began in this piece of land. This action of the Patriarchate was set as an example to other Christian denominations who asked and were given land areas in this particular district which was offered to the Patriarchate, and they also built Holy Churches. In this manner, the Patriarchate became the cause for the return of Christianity in Qatar. In the year 2010, His Beatitude our Father and Patriarch of Jerusalem Theophilos visited Qatar, and was received by the Emir Prince of Qatar Mamed Bin Khalifa Al Thani.

The construction project of the Holy Church was being continued with the addition of the Bishop’s residence on the opposite side of the Church, by the hard toiling efforts of the Patriarchal Commissioner in Qatar Archimandrite Makarios the Hagiotaphite, who was ordained Archbishop of Qatar in 2014. With the funding by the Patriarchate and by noble donors, the project reached its completed current form, being in the need of its sanctification with the consecration service. So that the Church will be established in the ages for the worship and the sanctification of the congregation belonging to it, which numbers ten thousand Greek Orthodox faithful Christians from various countries.

The service was held on the aforementioned day according to the Typikon order of the Orthodox Church regarding the Consecration, with the litany of the holy relics of the Holy Martyrs of St. Savvas’ Lavra, three times around the Church, the planting of the relics inside the Holy Altar, the smearing of antiminsia and the Church walls with the Holy Myrrh, and with the celebration of the Divine Liturgy, which was officiated by His Beatitude the Patriarch of Jerusalem Theophilos. Co-celebrants to His Beatitude were; the Most Reverend Archbishops Aristarchos of Constantina, Makarios of Qatar, Philoumenos of Pella, Aristovoulos of Madaba, Ioannis from the Church of Serbia, Archimandrite Eudokimos, spiritual Father of the Holy Lavra of St. Savvas the Sanctified, Fr. George, Priest in Madaba, and Archdeacon Mark. The chanting was delivered by a choir from Thessalonica under the lead of Mr. Ioannis Hasanides in Greek, and by the parish choir in Arabic. The service was attended by the Consul General of Greece, His Excellency Mr. Constantinos Orphanides and the Consul General of the Republic of Cyprus in Qatar, His Excellency Mr. Mihail Zaharioglou, diplomatic representatives of other countries, invited clergy from various Metropolis of the Church of Greece and the Church of Crete, Reverend Abbess Theoxeni and nuns from the Patriarchal H. Monastery of Chrysopigi, of the H. Metropolis of Kydonia and Apokoronou, the full congregation of the people who prayed and glorified God for this gift of the consecration of the Church in the centre of the Arabic peninsula for their sanctification by the celebration of the Church services in it.

“By means of His coming, Christ hath filled all things with His light; our souls are now consecrated, and by His Holy Spirit He hath renewed the world; for a house is founded to the Lord’s praise and glory, wherein Christ our God, for the salvation of mortals, doth consecrate and hallow the hearts of all His faithful flock” the hymn writer of the church proclaims.

Rejoice O heavens and the earth be exulted, for by the grace of God we the clergy and the people are gathered here today, at the Emirate of the State of Qatar, which is under the canonical spiritual jurisdiction of the Patriarchate of Jerusalem, in order to officiate the consecration of this beautiful Holy Church in thanksgiving and doxology, a Church that has been built in honour of the local Father of ours among the Saints, Isaac the Syriac and of St. George the Great Martyr.

In the sacred history of the Holy Bible we see highlighted the fact that the Lord pointed out the tabernacle of the covenant which Holy Moses placed on earth. The covenant had also ordinances of divine service (Hebrews 9:1), and Solomon built a house for the Lord (Acts 7:47), namely a Temple where there were sacrifice offerings of “beasts, whose blood is brought into the sanctuary by the high priest for sin” (Hebrews 13:11).

St. John the Evangelist witnesses that “we have radiantly beheld the glory which the Son hath from the Father in the grace of truth. And as many of us as have received Him with faith, to all hath He given the power to become children of God; and we, who were born again not of blood, nor of the will of the flesh, but have received increase by the Holy Spirit, have raised up this house of prayer and cry out: Do Thy Thyself now establish this house O Lord”.

And the House of God, namely the consecrated Church, is inseparable with the worship and veneration of God in spirit and truth; “God is a Spirit: and they that worship him must worship him in spirit and in truth” (John 4:23-24) the Lord says. While prayer is the ascent towards God, or the invocation of God to grant us what is of need, according to St. John of Damascus. And according to St. John of Sinai (of the Ladder), “prayer is, as far as its quantity is concerned, a union between man and God, while as far as its energy is concerned, [prayer is] the food of the soul and enlightenment.”

For this reason, we say along with Sophronius the Patriarch of Jerusalem and our predecessor; today the things above co-celebrate with the things below and the things below converse with those above. Today the sacred gathering of the Orthodox faithful rejoices. Great art Thou O Lord, and marvelous are Thy works, and no words befit the hymn of Thy wonders.

Having willingly being raised up on the horrendous place of Golgotha in Jerusalem, the Lord worked out the salvation of us men on the Cross, renewing all creation; while in this established and sanctified by the power of the Holy Spirit and the intercessions of our Most Blessed Lady Theotokos, along with the prayers of our Holy Fathers among the Saints Isaac and St. George, this Holy Church, which is in natural and spiritual communion with the All-holy and Life-giving Tomb of our Lord and Saviour Jesus Christ, is being granted the enlightenment and renewal of His  resurrection from the dead, to all those who worship Him in faith, spirit and truth, and who pray to Him in repentance.

“The earth is the Lord’s, and the fullness thereof; the world, and they that dwell therein” (Psalm 24:1), David chants. In this hospitable oasis of the Arab and open to progress Emirate of Qatar, the gates of this consecrated house of God have been opened by the power of the Holy Spirit, so that all of us, either living here or visiting the State, who seek the rest of our souls, may hear the calling of the King of Glory, our Lord and Saviour Jesus Christ saying: “Take my yoke upon you, and learn of me; for I am meek and lowly in heart: and ye shall find rest unto your souls” (Matt. 11:29).

It was precisely this rest of the soul that our Holy Father Isaac sought in the harsh place of the desert, where he became like the tree of righteousness “which bringeth forth his fruit in his season” (Psalm 1:3). This very righteousness is being evangelized by the Rum Orthodox Church of Jerusalem, preaching and witnessing the love without hypocrisy, the philanthropy and the peace of our Lord and Saviour Jesus Christ at all times in all places. “The righteous shall flourish like the palm tree… Those that be planted in the house of the Lord shall flourish in the courts of our God. They shall still bring forth fruit in old age; they shall be fat and flourishing” (Psalm 92:12-14) the psalmist says.

And the “righteous who is planted in the house of the Lord” are no others than the Saints of the Church, who having become imitators of the kenotic sacrifice of the Love of Christ, bring forth their fruit, in which we rejoice today.

And we say this, my dear brothers and sisters in Christ, because the mercy of God has offered Our Mediocrity this blessing, of the consecration of the good work of this Holy House, which has been built from its foundations, it has been decorated and completed by the Most Reverend Archbishop Makarios of Qatar, our Hagiotaphite brother. Therefore, let us say along with St. Chrysostom “Lord sanctify those who love the decency of Thy house and the dwelling place of Thy glory” (Divine Liturgy of St. Chrysostom).

Finally, we find it appropriate and a duty, that not only the Church of Jerusalem, but all brotherly Orthodox Churches may thank from the depths of our hearts his Excellency the Ambassador of the United States of America Mr. Patrick Theros and especially His Majesty the Emir of the State of Qatar Hamad bin Khalifa Al Thani and His Highness his heir and current governor Emir Tamim bin Hamad Al Thani. We wish them that the Lord God may grant them health and longevity and governmental power for the good of the State with all its peoples.

Along with the hymn writer let us say: “the Church is like a luminous sky, enlightening all faithful; wherein as we stand let us cry out; establish this house O Lord”. Amen

During the dismissal of the Divine Liturgy His Beatitude offered the Most Reverend Archbishop Makarios of Qatar, who toiled for the construction of the Holy Church, a set of Bishop’s egolpia, wishing him that by the grace of God he may continue the mission of the witness of the love of the incarnate, crucified and resurrected Jesus Christ, for the spreading of the preaching of the Gospel, which began from the Horrendous Golgotha and the Life-giving Tomb. Archbishop Makarios offered His Beatitude an icon of the complex of the Church and the Archdiocese of Qatar, which has been painted by the nuns of the H. Monastery of Chrysopigi.

The Divine Liturgy was followed by a rich meal at the reception hall under the consecrated Holy Church.

THE GENERAL ABBOT OF THE FRANCISCANS VISITS THE PATRIARCHATE