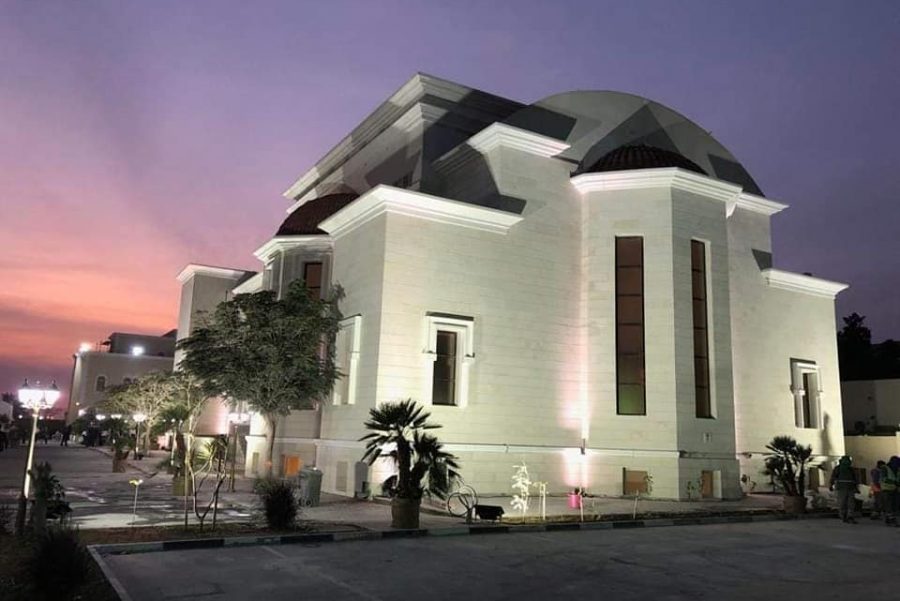 THE CONSECRATION OF THE HOLY CHURCH OF ST. ISAAC THE SYRIAC AND ST. GEORGE IN DOHA – QATAR

For the consecration of the Holy Church of St. Isaac the Syriac, St. George the Great Martyr and Trophy-bearer and St. Makarios Archbishop of Jerusalem in Doha, Qatar, H.H.B. our Father and Patriarch of Jerusalem Theophilos departed from Jerusalem on Thursday morning, February 8/21, 2019 and flew to Qatar from Ben Gurion Airport of Tel-Aviv and via Amman of Jordan. His Beatitude was escorted by the Most Reverend Archbishop Aristarchos of Constantina, the Most Reverend Archbishop Philoumenos of Pella, Archimandrite Eudokimos, who is the Spiritual Father of the H. Lavra of St. Savvas the Sanctified, and Archdeacon Mark.

His Beatitude arrived in Qatar on Thursday afternoon, February 8/21, 2019. He was welcomed by the Most Reverend Archbishop Makarios of Qatar, the Priests of the Archdiocese of Qatar, Priest Demetrios and Priest Stylianos, the associates of the Holy Archdiocese of Qatar, representatives of the Government, such as the Minister of Foreign Affairs and others. His Beatitude then went to the hotel designated for His time in Doha, as an Executive guest of the State of Qatar.

In the evening of the same day there was the formal welcoming reception of His Beatitude at the Holy Church of St. Isaac the Syriac and St. George the Great Martyr, by the Scouts and the full congregation of the Church. There was Great Vespers for the consecration ceremony, with the choir of Thessalonica under the lead of Mr. Ioannis Hasanides in Greek and with the parish choir in Arabic. There was the revelation of the sign of the owners at the forefront of the Holy Church which reads in Greek and in Arabic: “the founding stone of this Church was placed by His Beatitude the Patriarch of Jerusalem Theophilos on 16th April 2010 during the Governmental Office of Father Emir Sheikh Hamad Bin Khalifa Al Thani, and it was consecrated by Him on 22nd February 2019, with owner the Most Reverend Archbishop Makarios of Qatar and during the Governmental Office of H.H. Sheikh Tamin Bin Hamad Al Thani, Emir of Qatar”. Present were the Minister of Foreign Affairs of Qatar and other Governmental representatives and a large crowd of people, and His Beatitude address all present as follows;

Sisters and Brothers in Christ,

O give thanks to the Lord, for he is good;

This is the day that the Lord has made;

Let us rejoice and be glad in it.

It is an honour for us to be with you today, and we rejoice with great gladness on the occasion of the consecration of the completed Church of Saint Isaac the Syriac and Saint George here in Doha. We wish to express our gratitude to you, Your Eminence, Archbishop Makarios, for the hard work and dedication that you have invested in the building of this Church, and we wish also to acknowledge and thank all those many people who have been benefactors and who have worked themselves to make the dream of an Orthodox Church in Doha a reality.

There have been many years in the construction, and we can at last give thanks to Almighty God for the faith and steadfastness of so many who have brought this project to a happy conclusion.

On this occasion, we must also observe that the State of Qatar boasts not only exceptional economic progress and development, but also promotes a diverse cultural life. Since 2008, Christians have been able to build churches here on land contributed by the government, and there is an important tradition here of interfaith dialogue. Over the years, many important interfaith conferences and gatherings have been held here, and we welcome to this occasion our friends from other religious traditions.

The presence of the Churches in the State of Qatar, which allows freedom of worship within the frame of the civil law, is a testimony to the careful government of the Qatari authorities as well as to the wise rule of the present Emir, His Highness Sheikh Tamim bin Hamad Al Thani, and his father, His Highness Sheikh Hamad bin Khalifa Al Thani, Father Emir of Qatar. Qatar was the first Gulf State to make history by opening the door to non-Muslim religions. We wish to take this opportunity to express our gratitude to them for all that they have done to open the way for the building of this church.

The consecration of this church is significant for several important reasons.

First of all, this Church establishes the presence of the Orthodox Church in Qatar on a secure footing. At last the faithful have a permanent Church for worship and for the events of the community. The Rum Orthodox Church and the Patriarchate of Jerusalem have deep roots in this region, and we were witnesses to the emergence of Islamic faith and culture.

In addition to this historical truth, this Orthodox community in Doha is representative of the oikomene – the inhabited world – for gathered here are the people from all over the world. Qatar is well known for its international flavor, and this Orthodox community also reflects this international life. Here we see the living out of the vision of the Psalmist, who said;

The earth is the Lord’s and all that is in it,

the world, and those who live in it.

But perhaps most significantly the consecration of this Church that is dedicated to St. Isaac and to Saint George is a testimony that challenges the so-called “clash” of civilizations between Christianity and Islam. Where Christianity and Islam are lived in their true fullness, they have co-existed for centuries in respect and mutual understanding. Indeed, the dedication of this church to Saint George is a sign of this, as both Christians and Muslims share a deep veneration for Saint George.

The Arab peninsula as well as the Arab peoples of the Gulf, like all the regions of the Middle East, share a civilization of common religious and moral values, grounded in the respective Holy Books. These common fundamental religious and moral values have shaped and formed a common human civilization that understands the richness of our multi-ethnic, multi-religious landscape.

All these considerations make the consecration of this Church a historic moment. And if we may be permitted a personal note, it gives us a deep personal satisfaction to preside over this consecration, as we served here in this community 20 years ago, and we came to love and respect the Emirate of Qatar, its leaders, and its people.

On behalf of the Brotherhood of the Holy Sepulchre and the Holy Synod, we take this opportunity to convey the blessings of the Holy Tomb to this community, and to thank all those who have contributed to the building up of this Orthodox community and the completion of this church. We take deep pride in all that you have accomplished, dear Archbishop Makarios, on behalf of our Brotherhood.

May God bless you and our congregation, which is under your spiritual and pastoral care, and may God bless all the people of our beloved Qatar.

The service was followed by a festal meal, offered by the Most Reverend Archbishop Makarios of Qatar at the reception hall below the Holy Church.