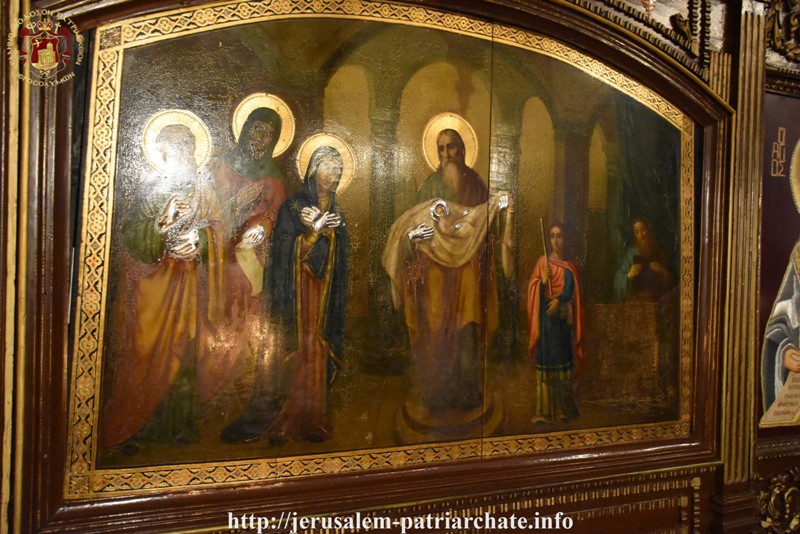 THE FEAST OF ST. SIMEON THE GOD-RECEIVER AT THE PATRIARCHATE

On Saturday, February 3/16, 2019, the commemoration of St. Simeon the God-receiver was celebrated, who received the Lord in his arms when He was brought in the Temple of Solomon by His parents on the 40th day after His birth in the flesh. This Feast took place at the Holy Monastery dedicated to St. Simeon, which is located in West Jerusalem, and where there is the tomb of the Saint and a part of his holy relics, which was donated by the Roman-Catholic Church of Croatia.

His Beatitude delivered the following Sermon to this congrengation:

“Let the gate of Heaven be opened today; for the beginningless Word of the Father, having received a beginning in time without forsaking His Divinity, is of His own will offered by a Virgin Mother in the Temple of the Law as a babe forty days old. The Elder recieveth Him in his arms, and the servant crieth to the Master: Let me depart; for mine eyes have seen Thy salvation. O Thou Who art come into the world to save the race of man, Lord, glory be to Thee.”

The indeterminable and superfluous word of God, who was born in the cave of Bethlehem and placed in a manger, has gathered us today in this holy place, where the house of Elder Simeon used to be, in order to celebrate the Meeting of our Lord Jesus Christ in the Temple, where the Righteous Simeon received Him in his arms.

This great event of the entrance of the child Jesus in the Temple of Solomon, brought by His parents, on th 40th day after his birth, according to the Law of Moses, is narrated in detail by St. Luke the Evangelist saying; “And he came by the Spirit into the temple: and when the parents brought in the child Jesus, to do for him after the custom of the law, Then took he him up in his arms, and blessed God, and said, Lord, now lettest thou thy servant depart in peace, according to thy word: For mine eyes have seen thy salvation, Which thou hast prepared before the face of all people; A light to lighten the Gentiles, and the glory of thy people Israel” (Luke 2:27-32).

Elder Simeon holds a prominent position among the people of the sacred history, namely of the Holy Bible. And this is so, because he was deemed worthy to receive in his arms the child Jesus, our God, from the hands of the Theotokos and Ever-Virgin Mary.

In other words, Simeon is proven to be an irrefutable witness of the incarnation of our God and Saviour Jesus Christ. This Simeon, moved by the Grace and the power of the Holy Spirit, not only received in his arms the Son of God, the Christ, but also recognized Him as “the salvation of God”, saying “mine eyes have seen thy salvation, Which thou hast prepared before the face of all people” (Luke 2:30-31).

This experience of Elder Simeon is also co-witnessed by the psalmist by saying “light has risen upon the righteous”. The law of God is not only hatred against sin, but also light for the righteous. He uses the word “has risen instead of rising. For every one who is benign and righteous has this divine light risen in his mind and heart” St. Cyril of Alexandria says.

“The Lord hath made known his salvation: his righteousness hath he openly shewed in the sight of the heathen” (Psalm 98:2) the psalmist says again. The Lord manifested this salvation in a very clear manner before all the nations, He made His righteousness visible to all the people without any discrimination. “[God] offered to all people the spring water of salvation and showed to all nations His righteous Kingdom”, St. Theodoritos Kyrou interprets.

Indeed, Elder Simeon came to the altar of the Temple with the power and energy, namely with the enlightenment of the Holy Spirit, as Luke the Evanglist witnesses by saying: “and the Holy Ghost was upon him (Simeon)” (Luke 2:25). The Holy Spirit had revealed to Simeon that he would not die before having seeing the One Whom the Lord God had anointed as the King and Saviour of the world; “And it was revealed unto him by the Holy Ghost, that he should not see death, before he had seen the Lord’s Christ” (Luke 2:26).

This means that without the Holy Spirit, no one is able to understand the mystery of the divine providence, and even more, the salvific mission of the mystical body of Christ, our Holy Orthodox Church. However, the Holy Spirit does not reveal/disclose the indescribable mysteries of God to men who are not pure at heart nor to those who are lukewarm in faith (Revelation, 3:16). “Draw nigh to God, and he will draw nigh to you. Cleanse your hands, ye sinners; and purify your hearts, ye double minded” St. James the Brother of God teaches (James 4:8).

“And Simeon blessed them, and said unto Mary his mother, Behold, this child is set for the fall and rising again of many in Israel; and for a sign which shall be spoken against” (Luke 2:34). These prophetic words of Righteous Simeon were fulfilled during the earthly mission of Christ, especially during the peak of His Passion on the Cross and His Resurrection from the dead.

The teaching of the Holy and established theologians as well as great Fathers of our Holy Church has boldly proclaimed that while Christ has two natures, the Divine and the human, He nevertheless is One in hypostasis and in person, “the Father and I are one” (John 10:30), the Lord says.

And according to St. Cyril of Alexandria, “the sign that shall be spoken against, is the sacred Cross” this is what St. Simeon speaks of. This is also preached by St. Paul, referring to the Sacred Cross of our Lord Jesus Christ: “But we preach Christ crucified, unto the Jews a stumblingblock, and unto the Greeks foolishness; But unto them which are called, both Jews and Greeks, Christ the power of God, and the wisdom of God” (1 Cor. 1:23-24).

Our Holy Church calls us through the mouth of Athanasius the Great to imitate the Righteous Simeon and Prophetess Anna, who were distinguished for their purity, guilelessness, forgineness, and chastity.

Let us entreat St. Simeon, my dear ones, along with the hymn writer and say: “Illuminate my soul and my sense of sight O Lord, so that I may clearly see and proclaim Thee as my God”.

After the Divine Liturgy the Elder and hospitable renovator of the Monastery Hegoumen Archimandrite Theodoritos offered a reception to the Patriarchal entourage and the congregation at the Hegoumeneion and the courtyard of the Monastery.