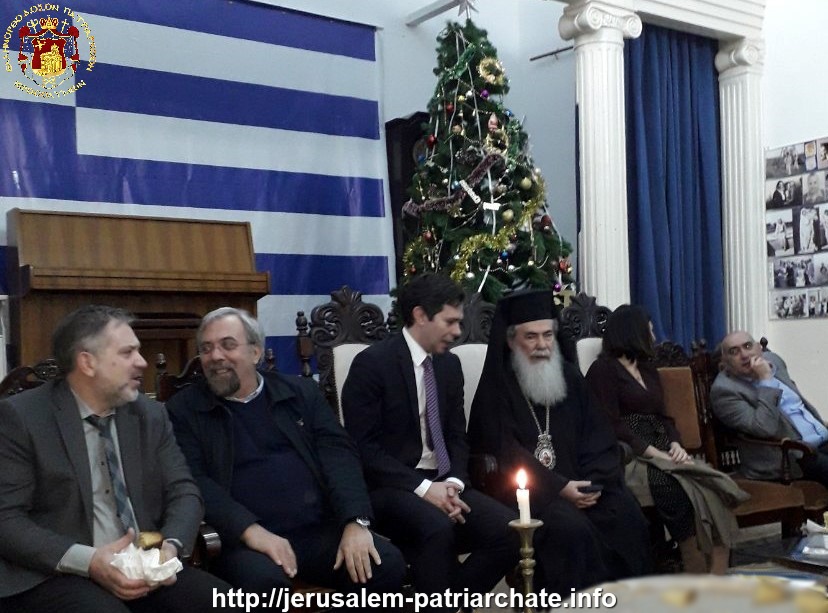 On Saturday evening, January 20/ February 2, 2019, His Beatitude our Father and Patriarch of Jerusalem Theophilos cut the New Year Cake of the Greek Community of Jerusalem at the modest ceremony which was organized at the Greek Club in West Jerusalem near the Greek Consulate.

The ceremony was honoured by the presence of the Consul General of Greece in Jerusalem Mr. Christos Sophianopoulos, the Consul Mrs. Katherine Tzima, the representative of the Cypriot Embassy in Tel-Aviv Mrs. Luiza Varakla, Doctor Demetrios Karousis and Greek expatriates.

After the troparion of St. Basil, His Beatitude wished a Happy New Year, then He cut and distributed the pieces of the Cake to all.

The President of the Community Mr. Anastasios Damianos thanked His Beatitude, saying that the ceremony of the cutting of the cake takes place on this day of the commemoration of St. Euthymios, during which the Greek Community honours in gratitude its benefactor the Hagiotaphite Euthymios, former Sacristan of the Holy Sepulchre, to whom they owe not only the Club but also its existence.