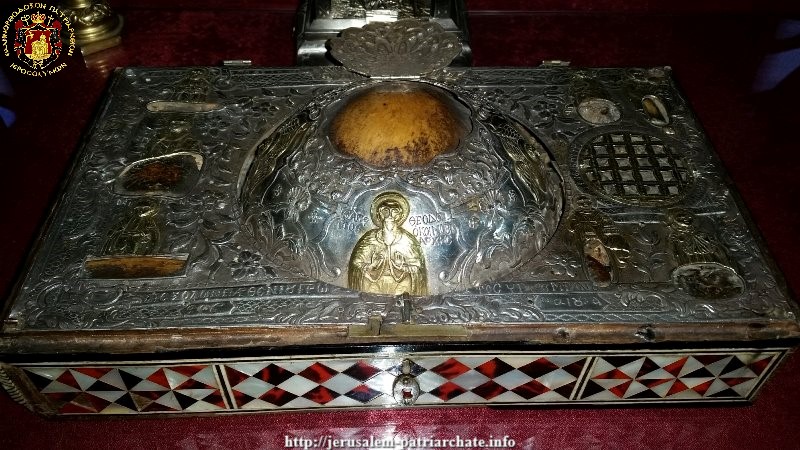 THE FEAST OF ST. THEODOSIUS THE CENOBIARCH AT THE PATRIARCHATE

On Thursday, January 11/24, 2019, the Patriarchate celebrated the commemoration of our Righteous Father Theodosius the Cenobiarch at his Holy Monastery which lies at the desert of Judea, between Beit Sahour and the Monastery of St. Savvas the Sanctified.

St. Theodosius founded this Cenobitic Monastery in the middle of the 5th century A.D. Having arrived at the Holy Land from his hometown Cappadocia, St. Theodosius strove in ascesis at the Monasteries of Palestine, leading a cenobitic, anchorite and hesychastic life.

At this Monastery the monks would receive the necessary training in order to join the Monastery of the Lavra, leading a strictly hesychastic-solitary life, and earning their living by working with hard physical toil,  making handicrafts for the sustaining of the poor and keeping charity foundations. Their slogan was “no lazy man should enter here”.

St. Theodosius, along with his co-patriot and fellow ascetic St. Savvas the Sanctified and their monks, played a significant role in the fight against Monophysitism and the prevailing of the decision of the 4th Ecumenical Synod in 451 A.D. regarding the one Hypostasis of our Lord Jesus Christ in two natures, the divine and the human.

This Holy Monastery underwent serious destructions from the various raids and was renovated around 1905 by the Cretan Monks Galaktion and Leontios, around 1950 by the memorable Archbishop Bartholomew of Madaba and in the last forty years it has been preserved and renovated by the Cretan Hegoumen Archimandrite Ierotheos.

The commemoration of St. Theodosius was celebrated at this Monastery with Vespers in the evening, led by the Most Reverend Archbishop Theodosios of Sebastia and with the Divine Liturgy in the morning, led by His Holy Beatitude our Father and Patriarch of Jerusalem Theophilos, with co-celebrants the Most Reverend Metropolitan Timotheos of Bostra, the Most Reverend Archbishops; Aristarchos of Constantina, Methodios of Tabor, Theophylactos of Jordan, Hagiotaphite Hieromonks, Arab-speaking Priests, Archdeacon Mark and other Deacons. The chanting was delivered by the Choir Leader of the Church of the Holy Sepulchre Mr. Constantinos Spyropoulos and monks from the Lavra of St. Savvas, while the services were attended by a large congregation, mainly from the neighbouring town of Beit Sahour and other pilgrims.

“With the streams of thy tears, thou didst cultivate the barrenness of the desert; and by thy sighings from the depths, thou didst bear fruit a hundredfold labours; and thou becamest a luminary, shining with miracles upon the world, O Theodosius our righteous Father. Intercede with Christ our God that our souls be saved” the hymn writer of the Church proclaims.

Our Father Theodosius, who has been shining with miracles, who has cultivated the barrenness of the desert both spiritually and physically, has gathered us all today in his Holy Monastery in order to honour his commemoration.

“Great and marvellous are thy works, Lord God Almighty; just and true are thy ways, thou King of saints” St. John the Evangelist says in his holy revelation (Rev. 15:3).

Precisely this righteous and true way did our Father Theodosius follow and walked on, who was established a Cenobiarch, namely the introducer of the coenobitic manner of ascesis of the Monks, but also a teacher of the desert, namely an educator of the spiritual life in Christ to those who strove in ascesis under his lead, as his hymn writer says; “O righteous Father Theodosius, into all the earth hath the sound of thine achievements gone forth; wherefore thou hast found in the Heavens the reward of thy labours. Thou didst destroy the ranks of the demons; thou didst attain to the orders of the Angels, whose life thou didst emulate without blame. Since thou has boldness with Christ God, pray that peace be granted unto our souls.”

Indeed my dear brothers, St. Theodosius “didst attain to the orders of the Angels, whose life he didst emulate without blame”. This is also confirmed by his Synaxarist who records the many miracles the saint worked during his earthly monastic life.

Our Father Theodosius has set St. John the Baptist as an example to imitate, along with the great ascetics of the desert around the river Jordan, and of those in Palestine in general, Euthymius the great, Savvas the Sanctified and the Great monastic in Antioch, Symeon the stylite “from whom he received the initiation to the virtue that was in him”. His biographer, Cyril of Skythopolis calls Theodosius of Cappadocia citizen of heaven, the great glory of Palestine, the boasting of the desert, the foothold of the monastic schema, the general and advocate of the right doctrines and the leader and protector of the coenobitic rule. Before he came to the top of the hill where his Holy Monastery lies, elder Logginos who was a member of the Order of the Studious, namely of the current Hagiotaphite Brotherhood, “received to bury blessed Ikelia, who had built the Church of the Seat of Theotokos”. Once blessed Ikelia had slept in the Lord, he worked out the providence of the place. In other words, all the monks of the Seat of Theotokos voted for him [Theodosius] to be the Hegoumen of the Seat of Theotokos.

Our Father Theodosius was distinguished as the great citizen of the desert of Palestine because he hearkened to the words of the psalmist saying; “But the mercy of the Lord is from everlasting to everlasting upon them that fear him, and his righteousness unto children’s children; To such as keep his covenant, and to those that remember his commandments to do them” (Psalm 103:17-18).

The Lord’s commandments, which we also are encouraged to keep, my dear brothers, are not heavy and unbearable, as our Lord Jesus Christ says: “For my yoke is easy, and my burden is light” (Matt. 11:30). And while a man’s life is temporary, the mercy of the Lord is eternal; “As for man, his days are as grass: as a flower of the field, so he flourisheth” (Psalm 103:15). The fear of the Lord is a prerequisite in order to attract His infinite mercy. Moreover, a simple thought or remembrance of the divine commandments is not enough; the action should follow. “For as many of you as have been baptized into Christ have put on Christ” (Gal. 3:27) St. Paul orders.

Christ, whom we are called to put on, is no other than the new Adam, who has been illumined by the divine and uncreated light of the Father, namely of the Holy Spirit who descended on Him in the river Jordan when He was baptized by St. John the Forerunner. This very Christ, the new Adam, for whom “there came a voice from heaven, saying, Thou art my beloved Son, in whom I am well pleased” (Mark 1:11) did our Father Theodosius put on with the garment of the uncreated light.

Our Lord Jesus Christ, St. Paul preaches, is “Who only hath immortality, dwelling in the light which no man can approach unto; whom no man hath seen, nor can see” (1 Tim. 6:16). It is impossible for mortal eyes to bear and attain to the brightness of the light of the divine glory. “No man shall see the face of God and live”. However in the future life those who have come to perfection will see Him. “Blessed are the pure in heart: for they shall see God” (Matt. 5:8), the Lord says.

Today’s honoured Father of ours Theodosius reached to the point of the purification of heart as his hymn writer says: “Though by nature a man, O Father, thou wast seen to be a fellow citizen of the Angels. For while living like a fleshless being upon the earth, O wise Theodosius, thou didst cast away and care for the flesh”. Therefore thou became participant and communicant of the vision of the divine glory and of the kingdom of heaven.

Let us pray to our Holy Father Theodosius, to intercede for us to our Lord and Saviour Jesus Christ who became incarnate through the pure and immaculate blood of the Virgin Mary the Theotokos, was born in Bethlehem and baptized in the Jordan. And let us say along with the hymn writer; “Grace hath appeared to all; enlightenment is come forth; deliverance is present; the world hath been enlightened; ye peoples, be filled with joy”. Amen.”

At noon, the elder renovator and Hegoumen of the Monastery Archimandrite Ierotheos offered a meal to the Patriarchal entourage and the congregation.