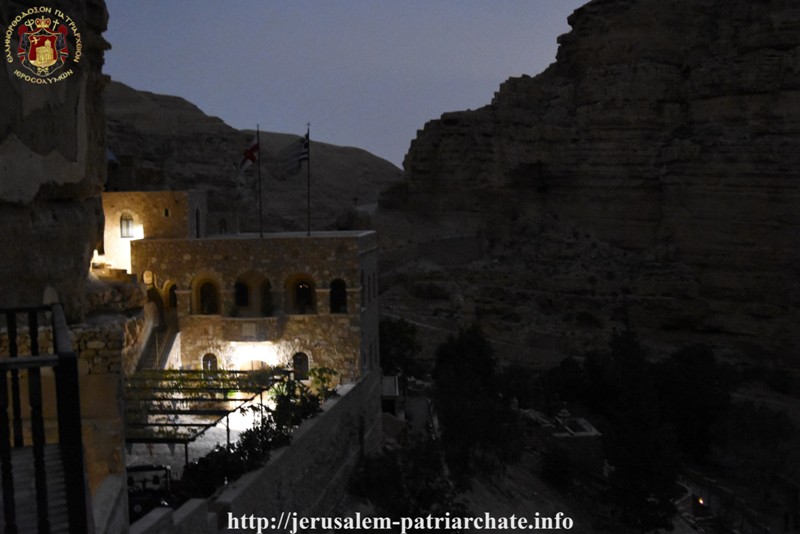 THE COMMEMORATION OF SAINTS IOANNIS AND GEROGE THE HOZEVITES

On Monday, January 8/21, 2019, the Patriarchate celebrated the commemoration of our Righteous Fathers Ioannis and George the Hozevites at the Holy Monastery bearing their names, which lies at the bank of brook Chorath, at the natural cave of a rock, at the brook’s estuary before Jericho.

The first of these Saints, Ioannis, is honoured by the Church on this day as the former Bishop of Caesarea, which came and lived in this Monastery in the 5th century, as a complacent Bishop who guided monks.

While Saint George, of Cypriot descent, rebuilt the Monastery after the destruction due to the Persian raid in 614 A.D.

In honour of these Saints as the founders of the Monastery there was an All-night Vigil, at the beginning of which the current Hegoumen and renovator of the Monastery Archimandrite Constantine Peramatzis welcomed H.H.B. our Father and Patriarch of Jerusalem Theophilos with the following words;

“I praise the two founders of the Monastery of Hozeva, wise George along with Ioannis…”

along with Your Reverend Entourage,

The Lavra of Hozeva celebrates today its founders, Saints Ioannis and George. Their lives had been a continuous sacrifice, having as their basic axis the liturgic life. It was a sacrifice of love and total devotion to the Son and Word of God, our Lord Jesus Christ. It was also a sacrifice of Godly love towards their fellow men.

We read in the life of St. George: “A certain day our Righteous Father George was sitting on a stone, being heated from the sun (because he was frail due to the excessive abstinence), and being totally afire inside from the desire of the spiritual love, with the aim of accomplishing the divine will. With continuous tears he was entreating the philanthropic God to have mercy on His people”.

We generously experience this very same love towards God and our fellow men in You, Your Holy Beatitude! And we agree with the biographer of our Holy Father George in those things he characteristically mentions about his Holy Geronda: “Believe me Reverend Fathers and Brothers….if I was under temptation or any kind of sorrow and I would meet him, immediately everything vanished from me, as if a sponge had erased them, and from then onward I had much serenity and peace…Then, returning to ourselves, we remember the pious manner of living of the Holy Father, namely the stability in fasting, standing up all night during the night-vigils, the unceasing tears, the patience in the temptations. And to cut a long story short, we remember the stable and patient manner of his virtuous and angelic life, and we are filled with good and useful hopes.”

Likewise, we have the same comfort of souls under Your Patriarchal and Fatherly Prayer and Protection!

Friend of Saints, Father and Master,

Beloved Brothers in Sisters in Christ,

We glorify the only-begotten Son of God, Who has no Father from the Mother’s side, and no Mother from the Father’s side; in the recent Christmas feast we saw Him as an infant, while in yesterday’s celebration of Epiphany we saw Him made perfect the One who is manifested perfect, our God. Today we see Him in the dwellings of the Monastery of Hozeva, and the surrounding area of the river Jordan. Today we see Him being glorified in His saints, namely Ioannis, Ioannis the New and George, who were redeemed from the darkness and now dwell in the light of God’s knowledge along with the Heavenly hosts, praising and glorifying Him.

We glorify the Holy Trinitarian God who has called all of us in this sacred Eucharistic gathering in order to festively honour the great ascetics of the desert of the Jordan and brook Chorath, the righteous George who came from Lefkara of Cyprus to these holy places that the preaching of repentance of St. John the Baptist was heard saying: “There cometh one mightier than I after me, the latchet of whose shoes I am not worthy to stoop down and unloose… He shall baptize you with the Holy Ghost.” (Mark 1:7-8).

Having been enlightened by the Holy Spirit, our Father George came in this deserted place following the footsteps of Holy men, such as Prophet Elias, and hearkening to the Lord’s words: “ Take my yoke upon you, and learn of me; for I am meek and lowly in heart: and ye shall find rest unto your souls” (Mat. 11:29). “Taken captive by divine love for the holy places of Sion, O all-blessed, thither didst thou depart, and there didst thou abide till thy death, O wisest of men, afflicting thy flesh with labours, towards the heavenly Sion” the hymn writer of the Church proclaims.

The Church honours and venerates the commemoration of its saints because the prophets and the saints of the Law foretold us the kingdom of heaven: “Repent ye: for the kingdom of heaven is at hand” (Mat. 3:2) as St. John the Baptist used to preach in the desert of Judea. “For as many of you as have been baptized into Christ have put on Christ” (Galatians 3:27) St. Paul preaches.

And Christ, who we are called to “put on”, is no other than the new Adam, who has been illumined by the divine and unapproachable light of the Father, namely of the Holy Spirit, who descended upon Him in the form of the dove when He was baptized in the river Jordan by St. John.

This very Christ, the new Adam for whom “there came a voice from heaven, saying, Thou art my beloved Son, in whom I am well pleased” (Mark 1:11) is the One St. George put on from the garment of the unweaning and uncreated light. And we say this because Christ is the true light. “I am the light of the world: he that followeth me shall not walk in darkness, but shall have the light of life” (John 8:12). While St. Paul advices us by saying: “put on the new man, which after God is created in righteousness and true holiness” (Ephes. 4:24). Put on the new man, who is the new creation, which has been created according to the Will of God, so that you live in righteousness towards men and in devotion and holiness towards God, namely with the virtues which are the fruit of the truth of the gospel.

Indeed, my dear brothers and sisters, the yoke of our Lord and Saviour Jesus Christ is good and the burden is light. In other words, the yoke of the obedience in Christ and His teaching is soft and salutary for the one who carries it; but also the burden of the commitments and duties the Lord asks from us is light.

This very thing did our Father George acknowledge, who has become a precise measurement and example for his imitators who also became saints, the Fathers of this modest place of Hozeva, the luminaries, Ioannis and Ioannis the New from Romania.

Let us entreat our Lord and Saviour Jesus Christ as “at thy divine giving of birth [Theotokos], the Word stripped Adam of the coats of mortality and clothed him with the robe which He alone had woven when He received a body in thy womb”, so that by the intercessions of our Holy Father among the Saints George the Hozevite and the saints of Hozeva with him, we who honour them, may be granted the enlightenment of the divine Epiphany of the river Jordan and the divine communion. Amen.”

The contrite feast was followed by a monastic meal which was offered to the Patriarchal Entourage and all congregation.

After the aforementioned two Saints of the Monastery, the Monastery always honours the first five ascetics who lived there in the 4th century, Promos, Elias, Aias, Gannaios and Zinon, and the new Saint Ioannis from Romania who has been recently canonized a Saint of the Orthodox Church by the Patriarchate of Jerusalem.