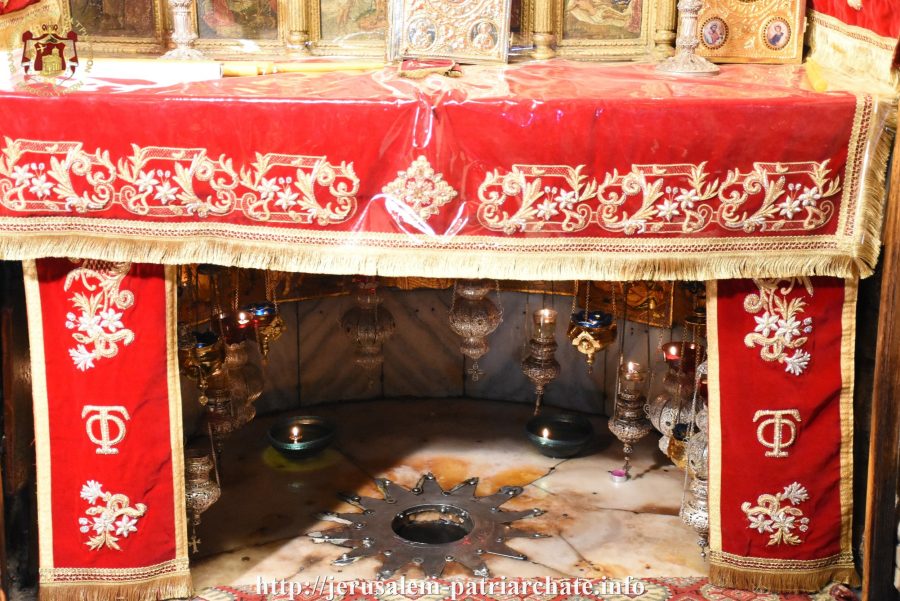 THE CHRISTMAS FEAST AT THE BASILICA OF THE NATIVITY IN BETHLEHEM

The celebration of Christmas Day at the Basilica of the Nativity in Bethlehem began on the night of Christmas Eve, Sunday December 24, 2018 /January 6, 2019 from 10.30 p.m. onward.

At that hour there was the entrance from the Baptism Gate at the Catholicon of the Basilica at the ikonostasion area. Matins began there, led by the Most Reverend Archbishop Demetrios of Lydda, from the Six Psalms until the Kathismata.

In the Cave, there was the reading of the Gospel narrative of the Nativity according to St. Luke, in Greek and in Arabic.

Afterward there was the reading of the Christmas message of H.H. Beatitude in Greek, by Geronda Secretary-General Most Reverend Archbishop Aristarchos of Constantina and in Arabic by Priest Issa Mousleh, the representative of the Arabic M.M. and the veneration of the Star and the Manger followed.

Then there procession went up by the north gate of the Cave and there was a litany three times around the pillars of the five-aisled Basilica and at its centre.

A special prayer followed, and after that the Service of Matins and the Divine Liturgy in the Basilica, officiated by His Beatitude, with co-celebrants the Archbishops of the Throne and many Priests, Hieromonks and Deacons. The visiting from Greece choir “Tropos” chanted under the lead of Mr. Constantinos Aggelidis in Greek, and the choir of the Basilica of the Nativity under Mr. Lawrence Samour in Arabic, until 3.30 a.m. At the same time there was the Divine Liturgy was being celebrated at the God-receiving Cave, led by the Most Reverend Metropolitan Joachim of Helenoupolis, at the singing of the Choir Leader of the Church of the Holy Sepulchre Mr. Constantinos Spyropoulos in Greek, and some members of the choir of the Basilica of the Nativity in Arabic.

THE FEAST OF THE APODOSIS OF PASCHA AT THE PATRIARCHATE