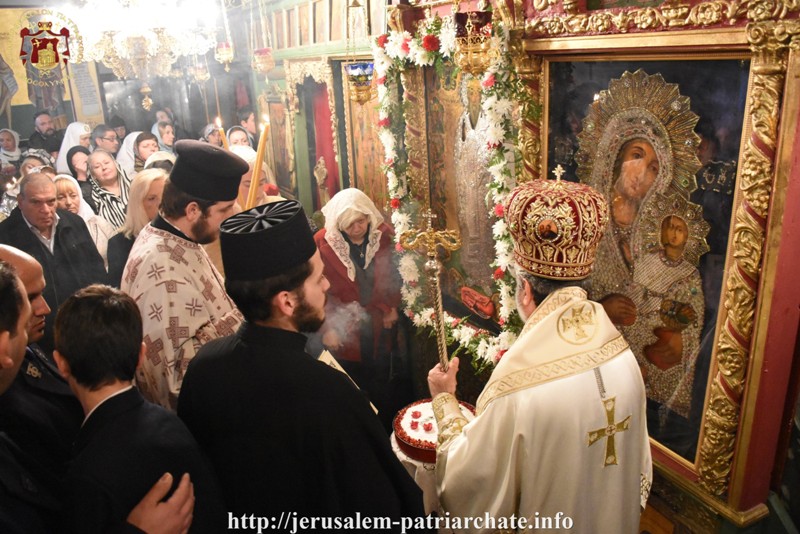 THE FEAST OF OUR RIGHTEOUS FATHER SPYRIDON OF TRIMYTHUS THE WONDERWORKER

On Tuesday, December 12/25, 2018, the Patriarchate celebrated the Feast of our Righteous Father Spyridon Bishop of Trimythus the Wonderworker. St. Spyridon participated at the First Ecumenical Synond in the 4th century A.D. as the Bishop of Trimythus, and defended the One Essence of the Son with the Father, being a humble and pious Father, full of virtues, through which he received by God the grace of the gift of working miracles such as the resurrection of his daughter Eirini, the turning of a snake into gold and then the gold again back to snake, many healings and rescuing of faithful from dangers, and also working many miracles after his death. As known, his sacred relics are kept in the island of Corfu.

At the Holy Monastery of St. Spyridon of the Patriarchate, there was Vespers in the evening and the Divine Liturgy was celebrated on the day of the feast, led by the Most Reverend Archbishop Theophanes of Gerassa, with co-celebrants; the Hegoumen of the H. Monastery of St. Nicodemus Archimandrite Makarios, the Arab-speaking Priest Haralambos Farah Bandour, ministering Priest of St. James Cathedral, deacons Demetrios and Hader. The choir was formed by the choir leader of the Holy Church of Saints Constantine and Helen Archimandrite Eusevios and the Patriarchal School students, while the services were attended by a pious congregation of monks, nuns, and pilgrims.

During the Divine Liturgy the Patriarchal entourage arrived with H.H.B. our Father and Patriarch of Jerusalem Theophilos and venerated at the Holy Church.

After the Divine Liturgy the Hegoumen Archimandrite Sergios offered a generous reception to the Episcopal entourage and the congregation at the hegoumeneion.

HOLY WEEK AND EASTER IN QATAR