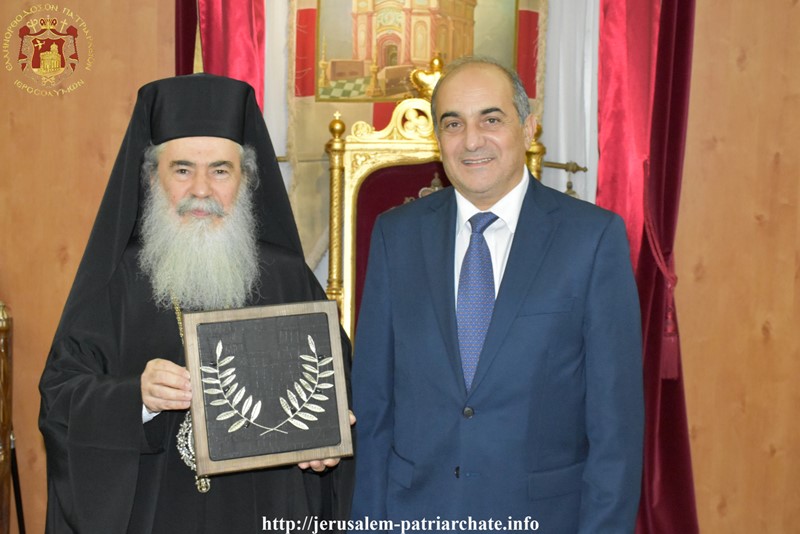 THE PRESIDENT OF THE CYPRUS PARLIAMENT VISITS THE PATRIARCHATE

On Sunday afternoon, November 5/18, 2018, the President of the Houses of Parliament of the Republic of Cyprus Mr. Demetrios Syllouris visited the Patriarchate, escorted by the Deputy Director for Parliament Affairs Mr. Socrates Socratous, the Ambassador of Cyprus in Israel Mrs. Thessalia Siambou, and other collaborators of the Parliament of Representatives, such as the Manager of International Affairs Mrs. Evi Hatjiyianni, the International Relations Officer Mrs. Eleni Persiani and the Deputy Chief of the Mission of the Cyprus Embassy in Israel Mr. Chrysanthos Constantinou and the Director of the Office of the Cyprus Tourism Organization in Israel Mrs. Louiza Varakla.

His Beatitude also spoke on the mission of the Patriarchate for the preservation of the peaceful co-existence in the Holy Land and the good relations it keeps with Jordan, explaining that they began from the time of the memorable Patriarch Sophronios and Khalif Omar Khattab in the 7th century.

As proof of the peaceful mission of the Patriarchate, His Beatitude mentioned the completed project of the renovation of the Sacred Edicule, two years ago.

In memory of this visit, the President of Parliament offered His Beatitude a plaque with a silver olive branch, while His Beatitude offered an icon of the Theotokos of Jerusalem and one of the Sacred Edicule and other blessings, and blessed them for their visit to the Church of the Holy Sepulchre, wishing them a favourable outcome for the solution of the problem of Cyprus.

THE OFFICIAL OF THE US EMBASSY VISITS THE PATRIARCHATE