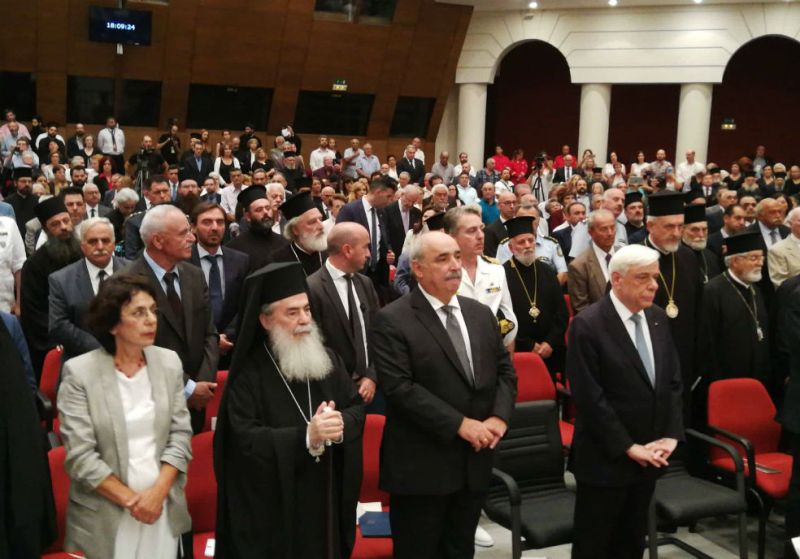 The Orthodox Academy of Crete (O.A.C.) in Chania, and at the Holy Monastery Gonia, celebrated at the 3rd Meeting of its “Partners” 50 years of its operation last Tuesday and Wednesday, September 19 and 20,/ October 3, 2018. The Academy was founded by the memorable Metropolitan Eirinaios Galanakis of Kissamos and Selinou and Mr. Alexios Papaderos, and is currently under the protection of the Ecumenical Patriarchate with the aim of promoting dialogue and reconciliation.

H.H.B. our Father and Patriarch of Jerusalem is one of these “Partners”, having received this honour in June 2016, when the O.A.C. hosted the Great Synod of Orthodoxy.

Having been invited for this meeting, His Beatitude arrived at Chania airport, escorted by Geronda Secretary-General Most Reverend Archbishop Aristarchos of Constantina and Archdeacon Mark, where He was warmly received by the Archbishop Eirinaios of Crete, Metropolitan Amphilohios of Kissamos and Selinou and the General Manager of the Academy Mr. Constantinos Zorbas.

In the evening of the same day His Beatitude was the guest of honour at a dinner for the representatives of Churches offered by the Mayor of Kissamos Mr. Theodoros Stathakis.

His All-holiness the Ecumenical Patriarch Bartholomew arrived at noon on Tuesday September 19/October 2, 2018, and Chaired the proceedings of the 3rd Partners Meeting. Present at the Meeting was also His Beatitude Archbishop Chrysostom of Cyprus. The proceedings referred to the main events of the 50 years of operation of the Academy and to the further development perspectives of its mission, especially in the fields of Youth, Bioethics, Ecology, and our Demographic issue within the challenges of our era.

In the afternoon of the same day the “Partners” of the Meeting and their escorts took place at the consecration of the Holy Church of St. Nikiforos the Leper at Syrikario. Attendants were also the President of the Greek Republic Mr. Prokopios Pavlopoulos, the Deputy Minister of Foreign Affairs of Greece Mr. Markos Bolaris, Army and Police forces, young people dressed in traditional Cretan clothing and approximately three thousand people, to whom the Ecumenical Patriarch delivered a Sermon.

After the consecration ceremony, His Beatitude took place at the inauguration of the Increased Care Wing at Anousakeio Institution, where ninety patients with incurable diseases are hospitalized.  The Institution hosts a Polyclinic, a Pharmacy and offers free common meals to people in need as well as services of advanced medical care.

In the evening, His Beatitude participated at a dinner offered by the Holy Metropolis of Kissamos and Selinou at the Tsatsaronakeio Multicentre.

On Wednesday September 20/ October 3, 2018, the Divine Liturgy was celebrated at the Holy Church of the Monastery Gonia, with first in participation in prayer His All-holiness the Ecumenical Patriarch Bartholomew. Co-celebrants were the “Partners” while their escorts attended the Service in prayer.

After the Divine Liturgy there was a memorial service for the repose of the souls of the memorable owners, Partners, renovators and benefactors-donors of the Academy with special reference to the memorable Metropolitan Eirinaios of Kissamos and Selinou.

Consequently the Ecumenical Patriarch offered the General Manager of the Academy Mr. Constantinos Zorbas the title of Archon.

Finally He inaugurated the heirlooms hall of the Holy Monastery Gonia.