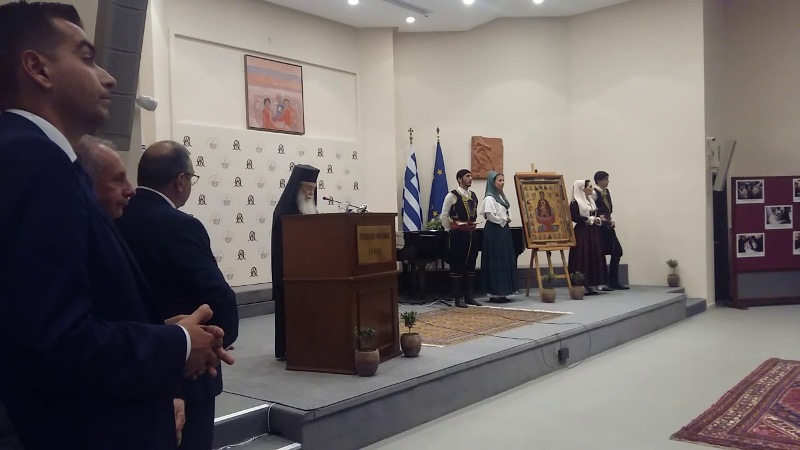 ADDRESS OF H.H.B. THE PATRIARCH OF JERUSALEM THEOPHILOS AT THE ORTHODOX ACADEMY OF CRETE – PARTNERS MEETING

Your Excellency President of the Hellenic Republic Mr. Prokopios Pavlopoulos,

Your Beatitudes Heads of the Orthodox Churches,

Most Reverend Archbishop Eirinaios of Crete,

Most Reverend Metropolitan Amphilohios of Kisamou and Selinou,

The Orthodox Academy of Crete, has been founded by the memorable Metropolitan Eirinaios Galanakis of Kisamou and Selinou and the Most Respected Mr. Alexander Papaderos, in a land area that belongs to the Holy Monatery Gonia, under the spiritual jurisdiction of the Ecumenical Patriarchate, and is currently led by the Presidency and administration of the Most Reverend Metropolitan Ampihlohios of Kisamou and Selinou and the Most Respected Mr. Constantinos Zorbas. During its fifty years of operation the Academy has cultivated the dialogue as a means of communication and has hosted quite important theological, educational and ecological Conferences, Inter-Orthodox and Inter-Christian meetings, and has become an ecclesiastical, cultural, inter-orthodox and ecumenical Centre, worthy of the history of the place of its foundation, the history of the pre-Christian and especially the Christian Crete.

Undeniably the most significant of the events that the Academy has hosted has been the Holy and Great Synod of Orthodoxy, which renewed and strengthened the already existent Cohesion within the Orthodox Church, its Community in Christ and unity in the Common Chalice and the cooperation in a spirit of love. Fruits of this love were the decisions taken in its proceedings, which give to Our congregations and to the world, words of life, comfort, reconciliation, peace, love and righteousness, regarding the hope in Us.

Following the consignment of this Great Synod of Orthodoxy, we meet today in this Third Synaxis of the Partners, in order to consider, study and estimate the ways by which we may be able to contribute to the good condition of the whole world, the cessation of hideous life-threatening crimes of violence against our fellow men, the union of broken families, the feeding of millions of hungry and starving people, the healing and treatment of ecclesiastical and political problems and schisms, the experience of Church as the means of revealing the Kingdom of God. Through this action of Ours, we may contribute to the comfort of our fellow men and the glory of the venerated Name of our Trinitarian God.

At the Newsletter and the Message of the Holy and Great Synod, there was a projection of the need of the holistic pastoral confrontation for the phenomenon of secularization which juxtaposes the Godly tradition in many ways. Once again from Crete, and from this Holy place that has been sanctified by the Synod, we speak the same teaching to the people of God that has been entrusted to us, that, in order to overcome the catalytic authorities of secularization, we ought to turn to our great teachers and fathers and be taught by them.

The Orthodox Theology is in need of a new start, not however as an expression of a stagnant spirit, but as a powerful voice through the evangelization and re-evangelization of the world. Our Fathers had a fruitful and lively speech, they conversed with the people submitting substantive proposals,  that is why they abhorred the superficial recognition, aiming with all their might only to the regenerative evangelic truth.

The Orthodox Church respects the religious freedom and is tolerant to diversity, knowing at the same time that the transfiguration of the people is made possible through the spiritual personalities who engrave the course of spiritual movements.

Therefore, the new challenge is the witness (martyria) of Orthodoxy as a spiritual successor of the former spiritual leaders to be the salt of the earth and the light in the world, according to the Lord’s command.

The Patriarchate of Jerusalem would like to express its thanksgiving to the Orthodox Academy for the invitation to participate in this Synaxis, as well as for its hospitality for the members of its congregation. From the All-holy and Life-giving Tomb, We wish the granting of the power of the Crucified and Resurrected Lord Jesus Christ for the continuation of its precious ecclesiastical and cultural mission.

The long-standing tradition of exchanging Christmas greeting by Heads of Churches in...