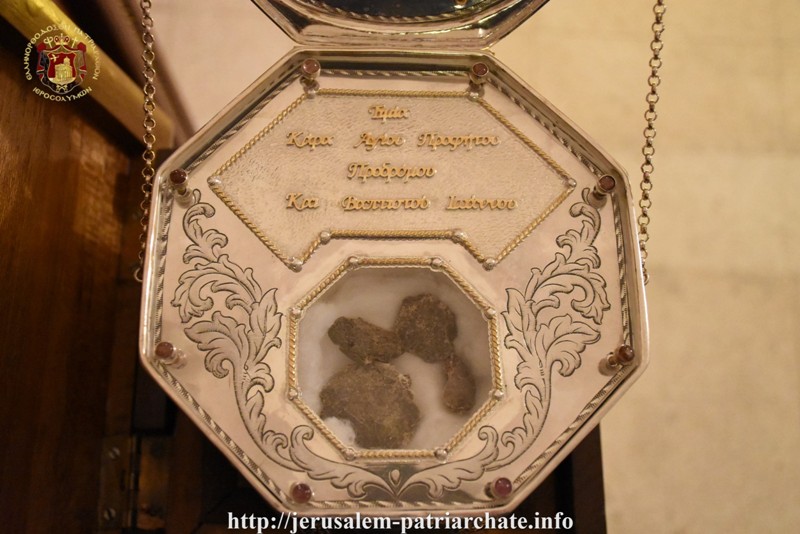 THE FEAST OF THE BEHEADING OF ST. JOHN THE FORERUNNER

On Tuesday August 29/September 11, 2018, the Patriarchate celebrated the commemoration of the Beheading of the Glorious Prophet and Forerunner John the Baptist at the Holy Monastery dedicated to his name on the West Bank of the River Jordan near the Dead Sea.

On this Feast the Church celebrates in joyful mourning the event that took place when Herod the tetrarch held St. John imprisoned because the latter had scorned him for keeping his brother Philip’s wife as his own mistress. Despite respecting John, Herod submitted to the unreasonable demand of Salome, daughter of Herodias, after her dance, and ordered the beheading of St. John, and his head was brought on a platter as a gift for his birthday.

For this Feast the Divine Liturgy could not be celebrated at the Holy Church of St. John in the Old City of Jerusalem due to the current renovation works, but it was celebrated instead at the Holy Monastery of the Saint by the bank of the River Jordan. The Monastery has been renovated after the destruction of the 1967 war, under the supervising of the Master of Ceremonies Archimandrite Bartholomew, with the funding of the Hegoumen of the Holy Monastery of Sarantarion Mount Archimandrite Gerasimos.

The Liturgy was led by the Hegoumen of the Holy Monastery of St. Gerasimos of the Jordan Archimandrite Chrysostom with co-celebrant Archdeacon Mark, while the chanting was delivered by Archimandrite Eusevios, and the Choir Leader and Patriarchal School teacher Mr. Constantinos Spyropoulos with the help of the School students. The Service was attended by many faithful who honoured the memory of “the greatest man born of a woman”.

After the Divine Liturgy there was a reception with fasting food by the Care taker of the Monastery Archimandrite Bartholomew.