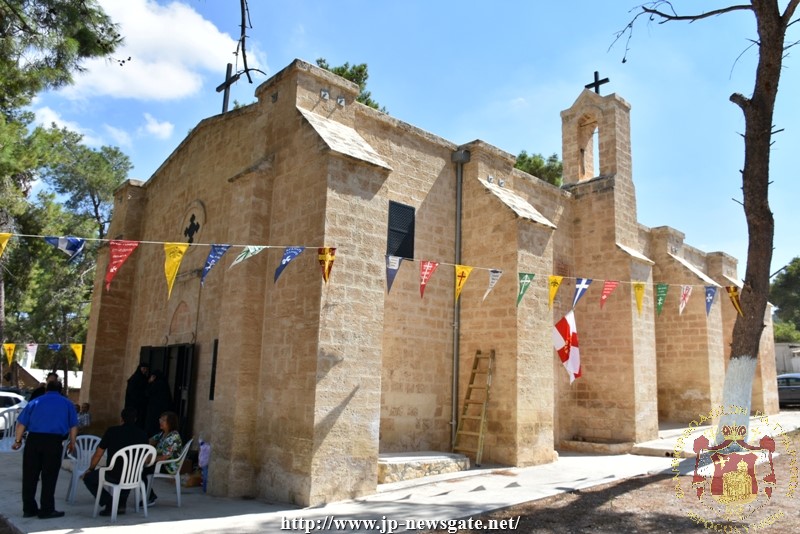 THE FEAST OF PROPHET ELIJAH AT MAALOULE

On Sunday July 23/August 5, 2018, the commemoration of Holy Prophet Elijah was celebrated a few days later from the actual feast day, at his Holy Church in Maaloule, near the city of Nazareth in Galilee.

This Holy Church belonged to the Patriarchate and was used by the Arab-speaking Orthodox Community there, which however deserted the Church and left the area after the political events in the year 1948.

The Patriarchate regained this Church from the Israeli army which had camped there. The Church was renovated and restored to liturgical function after the funding by the Hegoumen of the Holy Monastery of Tabor Archimandrite Ilarion and the Most Reverend Metropolitan Kyriakos of Nazareth.

His Beatitude preached the Divine word to this congregation as follows;

“As a seer of God, the Thesbite with Moses beholdeth upon Tabor that which eye hath not seen nor ear heard, and which the heart of earthborn men hath not considered, even the Almighty Lord incarnate”, the hymn writer of the Church proclaims.

The grace of the Holy Spirit has gathered us today at this sacred Church of Prophet Elijah, so that we glorify Christ our God in Eucharist, and exclaim in joy and gleefulness: “Rejoice thou earthly Angel and heavenly man, O Elijah, great of name”.

Prophet Elijah is distinguished among the prophets because, not only did he prophesize the incarnation of God the Word, but he also saw along with Prophet Moses at Mount Tabor on the day of Christ’s transfiguration “that which eye hath not seen nor ear heard, and which the heart of earthborn men hath not considered”.

Moreover, the Evangelist Luke commemorates Prophet Elijah when he refers to the apparition of God’s Angel to Zacharias, to announce the birth of St. John the Baptist, who “ will go on before the Lord, in the spirit and power of Elijah” (Luke 1:17), meaning that he would have the spiritual gift and the power of Prophet Elijah.

And Apostle James the Brother of God, while emphasizing the power of prayer sets Prophet Elijah as an example saying: “Elijah was a human being, even as we are. He prayed earnestly that it would not rain, and it did not rain on the land for three and a half years. Again he prayed, and the heavens gave rain, and the earth produced its crops” (James 5:17-18).

The charismatic personality of Prophet Elijah is shown to act intensively with Godly zeal, both in the Old and in the New Testament, preaching repentance and fighting against idolatry to which the people of God had been drawn.

In other words, the contribution of Elijah in the preservation of the Divine History, the Moral Monotheism, which was revealed to Moses on Mount Sinai, had been decisive. A characteristic feature of this is the conversation between King Ahab and Prophet Elijah; “When he saw Elijah, he said to him, “Is that you, you troubler of Israel?” “I have not made trouble for Israel,” Elijah replied. “But you and your father’s family have. You have abandoned the Lord’s commands and have followed the Baals” (3 Kings 18:17-18), “and the four hundred prophets of Asherah (disgrace)”(3 Kings 18:19).

The prophetic mission of Elijah, as well as his preaching of repentance have a timeless significance and immediate referral to our contemporary era of apostasy and iniquity. “Don’t let anyone deceive you in any way, for that day will not come until the rebellion occurs and the man of lawlessness is revealed, the man doomed to destruction” (2 Thessalonians 2:3), says St. Paul, and he adds; “For the secret power of lawlessness is already at work; but the one who now holds it back will continue to do so till he is taken out of the way” (2 Thessalonians 2:7).

Here, my dear ones, one begs the question; what is apostasy, rebellion, and lawlessness? They are the fallacy of the “child of the devil and an enemy of everything that is right! You [the child of devil] are full of all kinds of deceit and trickery. Will you never stop perverting the right ways of the Lord” (Acts 13:10) according to wise Paul.

And “the right ways of the Lord” are the commandments of God, namely the enlightenment of the Holy Spirit, which is given to the people, so that they may be led to the truth of Christ through their repentance, as Prophet Ezekiel says: “And if a wicked person turns away from their wickedness and does what is just and right, they will live by doing so” (Ezekiel 33:19). And in more detail; it is righteous, when the sinner repents and turns away from sin and works righteousness, to live on as a very happy man, due to his righteous manner of living.

In other words, man is called to repentance through his freedom of choice and personal responsibility towards God. The grace of God is what performs the work in the repenting man; as St. Paul says, “where sin increased, grace increased all the more” (Romans 5:20). And elsewhere, “But when the kindness and love of God our Savior appeared, he saved us, not because of righteous things we had done, but because of his mercy. He saved us through the washing of rebirth and renewal by the Holy Spirit” (Titus 3:4-5).

To the excessive zeal of Elijah; “I have been very zealous for the Lord God Almighty. The Israelites have rejected your covenant. I am the only one left” (3 Kings 19:14). God, by His apparitions to Prophet Elijah as “great and powerful wind”, as “earthquake”, as “fire” and as “a gentle whisper” (3 Kings 19:11-12), teaches the Prophet who has sunk in despair due to the triumph of evil, that he should have been considering God’s love and long-suffering, for He is not pleased with the death of the wicked people, but awaits their repentance. “I have not come to call the righteous, but sinners to repentance” (Luke 5:32).

Therefore, my dear ones, let us entreat the wondrous and God-bearing Elijah, so that along with the Theotokos Mary, they may intercede for us to the only Friend of man, God. And let us say along with the hymn writer; “Beholding the great iniquity of men, and God’s immeasurable love for man, the Prophet Elijah was troubled, being wroth; and he uttered uncompassionate words unto Him that is compassionate, and cried out: Be Thou wroth with them that have set Thee as nought, O most righteous Judge. Bet the bowels of the Good One were in no wise stirred to punish them that set Him at nought. For He ever awaiteth the repentance of all men, since He is the only Friend of man”. Amen.

After the Divine Liturgy there was a reception.

In the afternoon the Most Reverend Metropolitan Kyriakos of Nazareth offered a meal at the Holy Metropolis Headquarters.