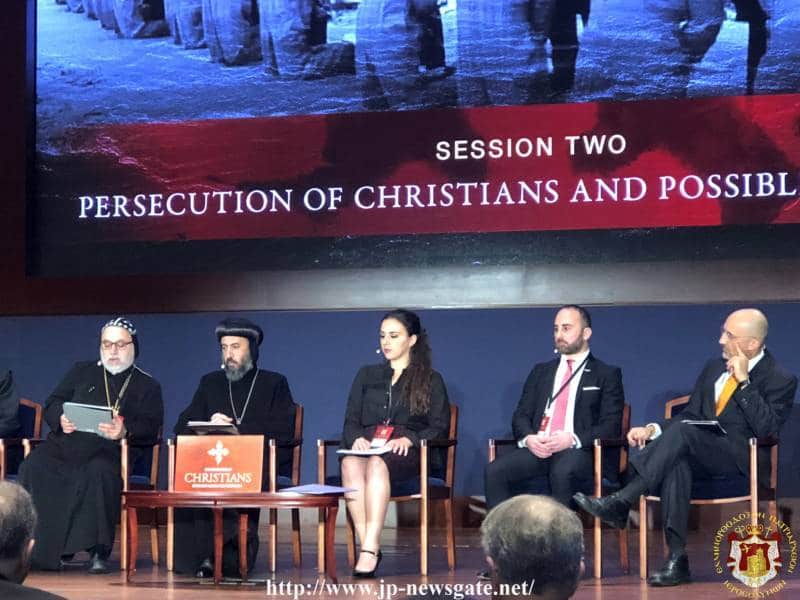 The Jerusalem Patriarchate took part in the 3rd Archon International Conference On Religious Freedom – The Persecution of Christians in the Middle East, in Capitol Hill, Washington D.C. on December 5, 2017. The Patriarchate was represented by Miss Anna Koulouris, secretary at the Secretariat-General office, who delivered  the following speech on the Persecution of Christians and Possible Solutions;

“I would like to convey the blessings and greetings of His Beatitude Patriarch Theophilos III of Jerusalem, who is currently in Russia continuing a shuttle tour to garner support from the international community on some of the issues I will discuss here today. We thank the Archons of the Order of Saint Andrew the Apostle for organizing such an opportunity to grapple with this issue of our time.

All the Churches in the Holy Land were completely united and immediate in their response to disturbing developments that unfolded this summer, following increasing efforts in the last few years by radical settler groups within Israel to alter the Christian character of Jerusalem.

The developments are twofold. On July 26th, an unprecedented bill was presented to the Knesset. The so-called “Bill of Church Lands,” which quickly gained 40 signatures with its initial proposal, aims to severely restrict the rights of all the Churches over their own properties and lands. It is the result of lobbying efforts from the Jewish National Fund and radical settler groups with a like-minded agenda to undercut the Churches, particularly the Patriarchate of Jerusalem, which is the largest property owner among them and which recently challenged the JNF for refusing to negotiate fairly on the extension of leases. Since July, a firestorm of baseless attacks in the media have fed into a campaign designed by the JNF to divert attention from their own errors and wrong-doing. Regardless of this bill’s chance of passing into law, its mere concept and immediate backing by a third of the Knesset, already demonstrates a very dark reality. This is a turning point in which radical elements are fighting to strip Jerusalem of its multi-religious, multi-ethnic, and multi-cultural integrity.

The second occurrence in July of this year was a Jerusalem District Court ruling against the Church mainly regarding two landmark hotel buildings belonging to the Patriarchate in the Old City’s Jaffa Gate. In 2004, under the leadership of the now deposed Patriarch Irineos, an unauthorized deal for long term leases was made with the radical settler group Ateret Cohanim. For 10 years, the Patriarchate has challenged this illegal deal, during which it unequivocally proved that the person concluding the deal was not authorized by the Patriarchate, had received a bribe, that there was bad faith, conspiracy, and that agreements were made without the due authority of the Patriarchate. Despite the abundantly clear evidence, the Court ruled in favor of the settler group. An appeal has been filed, but a danger is materializing in the meantime. These radical settler groups feel encouraged in their openly stated mission to “liberate the Holy Land from all non-Jewish elements.”

Last November, members of Ateret Cohanim forcefully tried to seize part of the Patriarchate’s Gethsemane dependency, which is in the courtyard of the Holy Sepulchre Church. They broke through the ceiling and erected an iron barrier.

In the last few years, settlers have increased their violent conduct, especially toward Christians, in an attempt to intimidate them out of the city. They harass and spit at our clergy on a daily basis, desecrate our churches and cemeteries, uproot our trees, block our entry to pray at some common sites, such as the Last Supper Room, and regularly commit arson. For this, civic authorities put out condemnations but the reality is the perpetrators face virtually no consequence.

When civic organs of the city of Jerusalem, particularly the Municipality, do not actively pursue visions of inclusion and mutual respect, they aid such a vision of exclusivity and intolerance, and in fact normalize it. Commitment from the government is an essential element in fostering peace. Their silence in the face of violence sends a clear message, that such hateful acts are tolerable.

This is not the disposition of peace-makers or protectors. This is not the attitude of people who understand Jerusalem for the holy place that it is – a place of encounters between human and divine. Jerusalem embraced the bodies of the prophets. Its winds carried their voices. In fateful hours, its earth soaked their blood and hosted their relics. If this is what Jerusalem is for the whole world, who could be bold enough to claim it for only himself?

Most of Jerusalem’s holy sites are sacred to more than one, if not all three faiths. In fact, the Patriarch of Jerusalem, Theophilos III argues that Jerusalem itself, as a whole, is a holy site. Who can say that a holy site should be accessible to some but not to others? In the Christian tradition, the holiness of a particular place is not dependent upon our presence there because holiness is not created by us. We simply nurture it where it’s found. Therefore, anyone can be allowed to share in its sanctity. Fighting for exclusivity over holy sites per se, defies their very nature.

In this wisdom, the mission of the Patriarchate of Jerusalem has always been to protect the holy sites as places of worship, open to all people indiscriminately. Nowhere is this more apparent than inside Holy Sepulchre Church. On any given day, at any hour, you will find people of all faiths inside. The stone walls and floors are buffed to smoothness by the thousands of hands and feet that have passed over them. With all your senses you can experience the place freely without barrier. This is by design, it’s not an accident.

This mission of inclusion has also allowed the Church to survive countless invasions and war over the course of 2,000 years. In one of the Holy Land’s most beloved examples, during the Arab invasion of 637, Patriarch Sophronios signed a covenant with Omar ibn al Khattab, which led to an age of peace where there otherwise could have been war. This covenant is recognized until today by all religious and civil authorities, upheld by the Patriarchate and the Hashemite Kingdom of Jordan, Israel, and the Palestinian Authority.

Yet, Ateret Cohanim, and other radical settler groups, are propelled by an aggressive motive to remove non-Jews from Jerusalem, as well as certain Jews considered as non-conformant, and they’re gaining ground, especially in the Old City, which is Jerusalem’s crown and core. They use underhanded methods such as coercion and undue authority to acquire property, and in their view, “redeem the land.” Jaffa Gate is one of the strategic centers for achieving this goal. It lies at the heart of the Christian Quarter and is the entryway artery to all the Churches’ headquarters, as well as for hundreds of thousands of pilgrims who visit the Holy Sepulchre Church just meters away. If settlers gain control of this area via the Jaffa Gate properties and push out tenants with the type of intimidating and violent tactics they’re notorious for using, they will be able to implement their vision to permanently change the Status Quo and work toward erasing the Christian presence from the Old City.

We take heart in the reality that as our ancient Patriarchates, “pillars and buttresses of truth,” (Tim. 3:15) carry forward through turbulent waters, whether hit head-on with storms, or targeted from dark corners, they are supporting one another.

In this spirit, let us work in our respective capacities to protect the Churches, “pillars and buttresses of truth (Tim. 3:15), and the Christian presence, which are a testament to, and the protector of, the sacred heritage we share.”