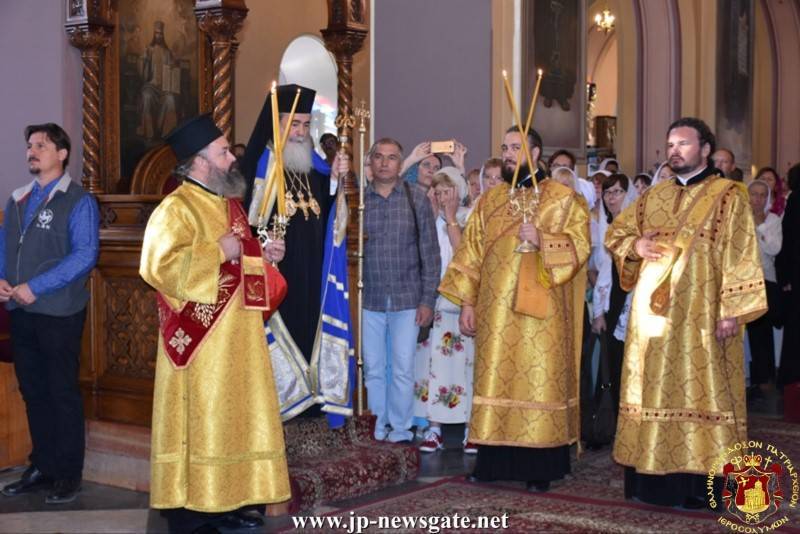 On Sunday 9th/22nd October 2017, His Beatitude our Father and Patriarch of Jerusalem Theophilos officiated the Divine Liturgy at the Holy Church of the Holy Trinity of the Russian Ecclesiastical Mission (MISSIA) in Jerusalem, on the occasion of its 170th  foundation anniversary.

His Beatitude our Father and Patriarch of Jerusalem Theophilos preached the Divine Word to this congregation as follows:

“We ought to receive the brothers who come to Jerusalem, the hagiographic Metropolis of the Churches, so “that we shall become abettors to the witness of truth in Christ our God” (John 3:8).

Reverend Archimandrite Alexander, Head of the Russian Missia in Jerusalem,

Most Reverend Brothers in Christ and co-celebrant Archbishops, Priests, Hierodeacons of our brotherly Church in Russia which shares the same doctrine with us, representatives of the most dear brother Patriarch Cyril of Moscow.

“Behold, how good and how pleasant it is for brethren to dwell together in unity” (Psalm 133:1), and especially at the dwelling places of Jacob, “for there the Lord commanded the blessing, even life for evermore” (Psalm 133:3).

This very blessing promised by the Lord is what the Church of Jerusalem enjoys, along with its Christian congregation, especially with the Order of the Wise men of the Hagiotaphite Brotherhood, the guardians and operators in the service of the All-holy Shrines, which are the irrefutable witnesses of the salvific preaching of the Gospel of our Saviour Jesus Christ and of His passion on the Cross and Resurrection.

Our Brotherly Churches of the same doctrine become also communicants and participants of the blessing of all things manifested here, during the pilgrimages of both their Most Reverend Hierarchs and the noble pilgrims, who visit us from all over the world.

In appreciation of the moral and material support received during the most difficult periods of its historic course, for the protection of the All-holy Shrines, the Church of Jerusalem has never ceased commemorating in prayer the benefactors and donors from the Russian speaking countries.

At this point one could add, that it was the duty of the Church of Jerusalem to return the favour through its great Patriarchs Theophanes III and Paisios, and contribute greatly during the crucial turning point in the history of the Russian Church (16th- 17th cent.), for the rescuing and protection of its Apostolic Hierarchic Order, which was being threatened by the fabricated hermaphrodite teaching of Unia.

The bonding in the brotherly love in Christ between Russia and Jerusalem Churches was founded on the teaching of Paul; “Bear ye one another’s burdens, and so fulfil the law of Christ” (Gal. 6:2). And the law of Christ is nothing but His love; “A new commandment I give unto you, That ye love one another” (John 13:34) the Lord says.

Today, with this Festal Patriarchal Divine Liturgy we demonstrate this law of love in Christ, in the attendance of the co-celebrant Archbishops and Priests, who had once been Heads of the Russian Missia in Jerusalem in the Holy Church of the Holy Trinity, on the occasion of its 170th foundation anniversary.

Anytime this law of Christ is bypassed or violated, the holy map of the spiritual rights of the Churches which has been enacted by the Holy Spirit in the Ecumenical Synods and the Sacred Canons is ruptured, resulting in schisms and divisions in the autonomous unity of the body of the One Holy Catholic and Apostolic Orthodox Church. “Now ye are the body of Christ, and members in particular” (1 Cor. 12:27), St. Paul declares.

As the keeper of Christ’s law and the apostolic traditions, the Church of Jerusalem remains faithful and steadfast in its mission of the witness of our Saviour Jesus Christ’s passion on the Cross and His Resurrection in the Holy City of Jerusalem, the place of “the glorious honour of His majesty” (Psalm 145:5) and “the perfection of His beauty” (Psalm 50:2). The majesty and the beauty of the “One Holy Catholic and Apostolic Church from one end of the world to the other” which is represented by the indeed martyr Church of Jerusalem in kenosis and sacrifice, according to the canons in its region “and does not boast in another man’s line of things” (2 Cor. 10:16) as St. Paul says.

Today’s festal spiritual anniversary of Duhovnia Missia, which was hosted in the Holy Monastery of the Archangels of our Patriarchate in the beginning, urges us to “consider the end of the conversation” (Hebrews 13:7) of its mission and relevant implications in the Holy Land and the Middle East. In addition, we are called by the Spirit of the love and care in Christ to coordinate its future actions so that the word of St. Paul will be preached; “And we know that all things work together for good to them that love God, to them who are the called according to his purpose” (Romans 8:28).

This should be done in order to avoid repeating the wrong doings of the past; and in order to achieve a more effective service in the ministry of the noble pilgrims and the pious remaining faithful Christians who live in hardship in the Holy Land and the surrounding Middle East region. And we say this because the Holy Church of Jerusalem, founded on the redemptive blood of our Saviour Christ on the Cross, and being witness of His resurrection, has been established as the true and faithful witness of the Ecumenical Orthodoxy and the guarantor of the Christian presence in the Holy Land.

Concluding, let us hear the exhortations of Peter, the Leader of the Apostles, saying; “Wherefore the rather, brethren, give diligence to make your calling and election sure: for if ye do these things, ye shall never fall: For so an entrance shall be ministered unto you abundantly into the everlasting kingdom of our Lord and Saviour Jesus Christ” (2 Peter 1:10-11).”

At the end of His Sermon, His Beatitude offered the Head of the Russian Mission Metropolitan Juvenalii an ivory icon of the Last Supper made in Bethlehem, an icon of the Resurrection of Christ with the Sacred Edicule and a copy of the cross made by the Architect Kalfa Komnenos of Mytilene, who built the Edicule in 1810. This cross was found in the recent renovation of the Sacred Edicule.

In return, the Metropolitan Juvenalii offered His Beatitude a set of Patriarchal egolpia with a cross made on the occasion of the 170th anniversary of the Russian MISSIA.

His Beatitude asked Metropolitan Juvenalii to convey His Brotherly affection to His Beatitude Patriarch Cyril and thanked the Head of the MISSIA Archimandrite Alexander and his associates for the good co-operation with the Jerusalem Patriarchate.

Consequently, His Beatitude was guided to the exhibition of liturgical items of MISSIA, inside the building Sergei, which MISSIA has recently recovered from the Jerusalem Mayoralty.

Finally His Beatitude was hosted at a meal during which He gave the address in the link below:

In the evening reception at the Notre Dame hotel, the Patriarchate was represented by the Most Reverend Metropolitan Joachim of Helenoupolis who read the address in the following link on behalf of His Betitude: