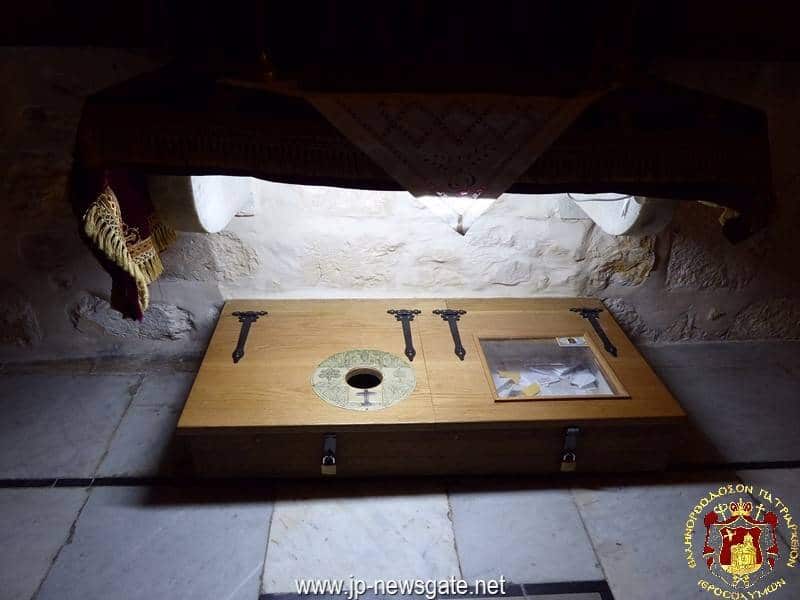 On the first Sunday after the Exaltation of the Cross, 18th September/1st October 2017, H.H.B. our Father and Patriarch of Jerusalem Theophilos, following the Church order of Jerusalem, officiated the Divine Liturgy at the Holy Monastery of the Sacred Cross, located on West Jerusalem near the Hebrew Houses of Parliament.

According to the Church tradition the wood by which the Lord’s Cross was made, was planted by Lot in the place where this Holy Monastery stands. The Patriarchate held a Higher School of Theology in this Monastery from 1845 to 1909, where exceptional Theologians of the Church, clergy and laity, and many of the Hagiotaphite Fathers of the second half of the 19th and the beginning of the 20th centuries studied, such as the later Archbishop of Athens and Professor of the School of Theology of the University of Athens Chrysostomos Papadopoulos, Meletios Metaxakis, Kallistos Milaras and Timotheos Themelis Patriarch of Jerusalem and many others.

In the very old Church of this Monastery with Byzantine mosaics on the floor and excellent murals, His Beatitude celebrated the Divine Liturgy with co-celebrants the Most Reverend Archbishop Aristarchos of Constantina, the Most Reverend Archbishop Theophylactos of Jordan, Hagiotaphite Hieromonks led by Archimandrite Ieronymos, Dragouman Archimandrite Mattheos, Archimandrite Kallistos, Archdeacon Mark and others. The choir was led by the left choir singer of the Church of the Resurrection Mr. George Alvanos, at the presence of the Consul General of Greece in Jerusalem Mr. Christos Sophianopoulos and members of the General Consulate of Greece, with the participation in prayer of a congregation of the few remaining members of the Greek Community of West Jerusalem, as well as those of the Old City of Jerusalem, alongside monks and nuns.

During the Divine Liturgy His Beatitude gave the following Sermon:

“Gleaming like the sun, Thy precious Cross hath brightly shone forth today at the Place of the Skyll, O Christ, set fast on that blessed ground glorified of all men; and being exalted on this all holy mount of Thine, it indicateth most plainly unto all that by Thy Cross, O Saviour, Thou hast raised our nature to Heaven’s heights, at the merciful Friend of man, O Almighty and Sovereign Lord” the hymn writer of the Church exclaims.

By the grace of God and the power of the Sacred and Life-giving Cross we celebrate this sacred and Eucharistic Gathering on the Feat of the Exaltation of the Sacred Cross, in this holy place where according to the tradition Lot, Patriarch Abraham’s nephew, planted the three tree branches which blossomed. These branches were of pine, cedar and cypress trees. One of the branches of this tree, was used for the making of the Cross of our Saviour Jesus Christ.

Today’s annual feast in this historic Monastery of the Cross is an extension of the great feast that was held a few days ago at the very sacred place of the finding of the Cross and at the place of Skyll, namely of the Crucifixion on Horrendous Golgotha.

The Holy Church of Jerusalem, being the faithful and truthful witness of the these sacred places glorifies the Holy Trinitarian God, because through the Cross the heavens proclaimed God’s glory to the people, as the hymn writer says “the voices of the Prophets declared beforehand the holy Wood, whereby Adam was set free from the ancient curse of death. Today as the Cross is lifted up, creation also lifteth up its voice, asking God for His rich mercy.” In other words, not only the old Adam, but the whole creation were liberated from the corruption of death, and the creation as a whole is called to take part in the freedom of the glorious nature of God’s children, as St. Paul preaches by saying: “Because the creature itself also shall be delivered from the bondage of corruption into the glorious liberty of the children of God” (Romans 8:21).

The finding of the Cross by St. Helen and its exaltation by Makarios, Patriarch of Jerusalem, are facts of the universal history, and this is because they refer to the common nature of men, whether they are Christians or not, believers or non-believers.

Chirst’s Cross is the ultimate symbol of the sacrifice of the Righteous One, namely the Son of Man, and for this reason it incarnates the outmost humility on the one hand, and the exalting power of repentance on the other. Being nailed on the Cross, Christ said: “Father, forgive them; for they know not what they do” (Luke 23:34).

In other words the mystery of the Cross confirms and seals the great and unspeakable mystery of the Divine Providence, the gift of the salvation in Christ for the whole world. Moreover, the exaltation of the Sacred Cross reveals the triumph of the truly sacrificial love of Christ and His mystical body of the Church.

Behold why, having experienced unspeakable words on his ascend in third heaven, St. Paul writes to the Galatians: “ God forbid that I should glory, save in the cross of our Lord Jesus Christ, by whom the world is crucified unto me, and I unto the world” (Gal. 6:14). And in more detail, St. Paul says, his only boast is the Lord’s death on the cross, and through his faith in this cross he has become dead to the world. And every action and miracle of Christ is great and divine and marvelous, but most marvelous of all is His Sacred Cross, St. John Damascene says. And this is so, because it was only by the Cross and no other means that death was abolished, the forefather’s sin was released, the resurrection was granted a gift, the gates of heaven were opened. “So many of us as were baptized into Jesus Christ” St. Paul says, “were baptized into his death” (Romans 6:3). “For as many of you as have been baptized into Christ have put on Christ” (Gal. 3:27), “Christ the power of God, and the wisdom of God” (1 Corinth. 1:24). Behold therefore, Christ’s death, namely His Cross, has surrounded us with God’s existing wisdom and power.

For this reason, my dear brothers and sisters, we exceptionally honour and venerate Christ’s Cross, and simultaneously we glorify His Holy Resurrection, at the place where He lay His feet, as Prophet David says “We will go into his tabernacles: we will worship at his footstool” (Psalm 132:7). And the fact that David is referring to the Cross is revealed by the following verse: “Arise, O Lord, into thy rest” (Psalm 132:8), as St. John Damascene interprets.

As for us today, “seeing the Cross’s Wood exalted, let us render all majesty and glory to God, Who in His goodness was crucified while wearing flesh”.

And with the hymn writer let us say: “O God, fulfilled is the saying of Thy Prophet Moses, which saith: Ye shall see your Life hanging before your eyes. Today the Cross is exalted and the world is set free from error. Today the Resurrection of Christ is inaugurated, and the ends of the earth rejoice, as with Davidic cymbals they offer Thee a hymn and say: Thou hast wrought salvation in the midst of the earth, O God, even the Cross, and the Resurrection, whereby Thou hast saved us, O Thou Who art good and the Friend of man. O Almighty Lord, glory be to Thee.” Amen.”

After the Divine Liturgy, the Service of the Exaltation of the Sacred Cross followed, and then the Hegoumen of the Holy Monastery Archimandrite Klavdios offered the Patriarchal Entourage a reception at the hegoumeneion.