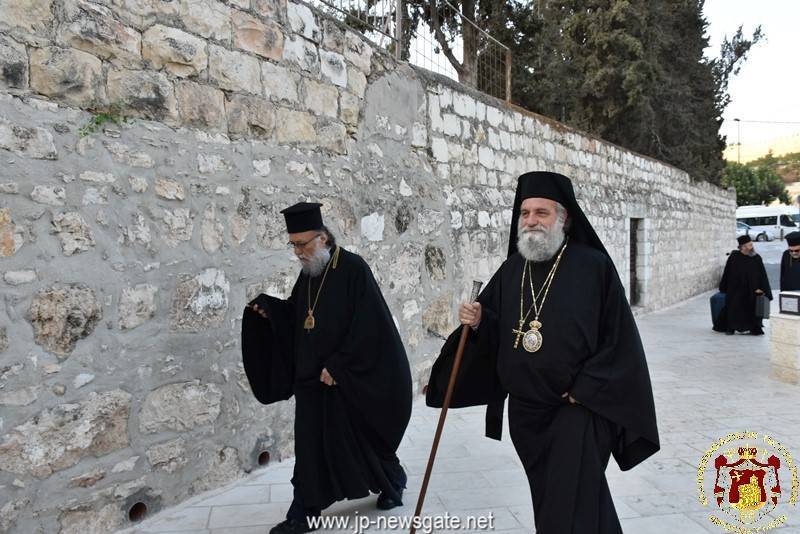 On Tuesday morning, 13th/26th September 2017, the commemoration of the consecration of the All-Holy Church of the Resurrection was celebrated by the Jerusalem Patriarchate.

On this Feast the Church as a whole, and especially that of Jerusalem celebrates the fact that after the completion of the building of the All-holy Church of the Resurrection at the place of the Cross and the Resurrection of our Saviour Christ in the year 336 A.D., all Bishops of the Synod of Tyra under the Archbishop Makarios of Jerusalem were gathered in Jerusalem by the command of the Emperor Constantine the Great, and held the magnificent Consecration Service of this Church, at the presence of the Emperor’s mother, St. Helen.

For this feast, the Divine Liturgy was celebrated at the Catholicon of the All-holy Church of the Resurrection, officiated by the Most Reverend Metropolitan Joachim of Helenoupolis, with co-celebrants Hagiotaphite Fathers and the singing of the Choir Leader Archimandrite Aristovoulos and the Left Choir singer Mr. George Alvanos, with the participation of many pilgrims.

After the Divine Liturgy His Beatitude our Father and Patriarch of Jerusalem Theophilos received the Episcopal entourage at the Patriarchate.