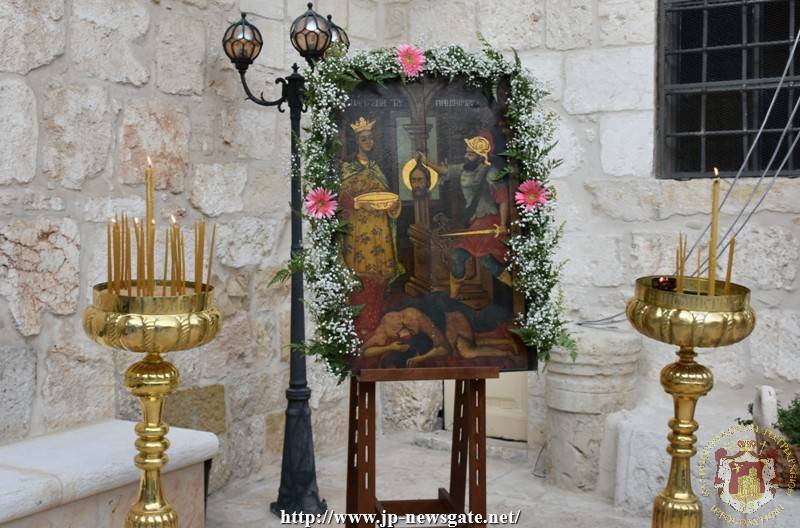 On Monday, 29th August/ 11th September 2017, the Patriarchate celebrated the memory of  the beheading of the Holy and Glorious Forerunner John at his Holy Monastery, located opposite the Church of the Resurrection, at a short distance to the south west, at the Christian district of the Old City of Jerusalem.

On this mournful feast, the Church commemorates the event that Herod the tetrarch sent a soldier to behead prisoner John the Baptist, because he was judged by him, as he had an illegal relationship with Herodias, his brother Philip’s wife. Herod was holding a birthday symposium in which he had invited lords and magnates. Salome, Herodias daughter danced there, and Herod liked her,  that is why he promised to give her whatever she would ask for, even half of his kingdom. Taking council from her mother, Salome asked the head of John the Baptist on a charger. Herod was sorrowful because he respected John, but for the oath’s sake and his guests he could not do otherwise, and sent the soldier and beheaded the Forerunner and gave his head to Salome, who brought it as a reward at the symposium (Mat. 14:1-12).

In honour of St. John the Baptist, at the aforementioned Holy Monastery there was Vespers in the evening, led by the Most Rev. Metropolitan Isychios of Kapitolias and the Divine Liturgy was celebrated on the day of the feast, led by the Most Reverend Metropolitan Chrysostomos of Patra, with co-celebrants Hieromonks and Archdeacon Mark, at the singing of the left choir singer of the Church of the Resurrection Mr. George Alvanos, with the participation of a congregation of monks, nuns, Greeks of the Greek Community and Arab-speaking faithful of the City of Jerusalem.

H.H.B. our Father and Patriarch of Jerusalem Theophilos came for veneration during the Divine Liturgy, escorted by Hagiotaphite Fathers.

The Patriarchal Entourage and the congregation were offered a fasting reception by the quite good keeper and renovator of the ancient Church and the whole Monastery, Hegoumen Archimandrite Bartholomew.
From Secretariat-General