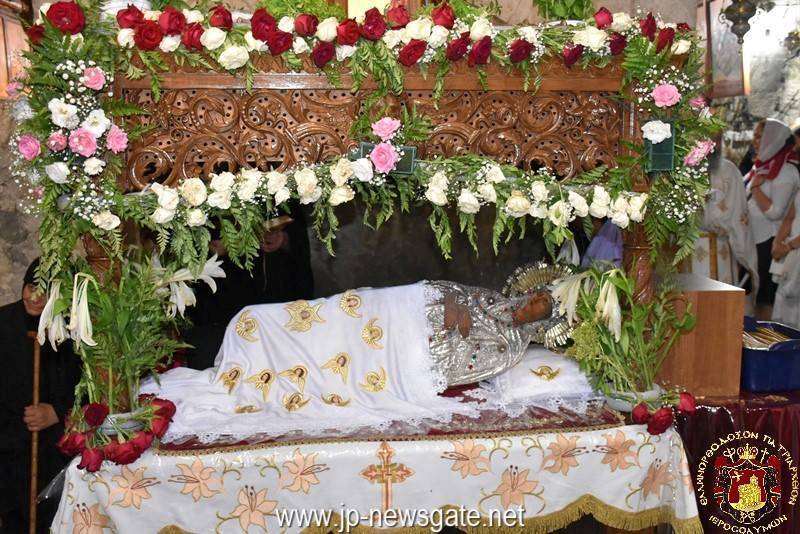 THE LAMENTATIONS AT THE DORMITION OF THEOTOKOS

On Sunday, 14th/27th August 2017,  the service of the Lamentations of Theotokos was held at the Holy Shrine of the Dormition of Theotokos in Gethsemane, where the Tomb of Theotokos stands. This service is included in the Order of the Typikon of Zion Church, and has been also followed by other Orthodox Churches in the last years.

It includes hymns to Theotokos, especially related to Her Dormition and Metastasis of both Her body and soul in Heaven, by Her Only Begotten Son our Lord Jesus Christ, and Her presence on His right side, having Her clothing of wrought gold and Her raiment of needlework (Psalm 45), and She intercedes for us making haste to help in need, sorrow and every other occasion.

For this Service, the Hagiotaphite Entourage left the Patriarchate led by its Hegoumen His Beatitude our Father and Patriarch of Jerusalem Theophilos and walked down Via Dolorosa passing by the Holy Monasteries of St. Charalambos, Praetorion, Saints Joachim and Anna and the First Martyr St. Stephen.

The service began with the formal welcome at the courtyard of the Holy Shrine and once inside, the Lamentations were chanted at the centre of the Holy Church, where the Epitaph of Theotokos was also carried.

The  service was led by His Beatitude our Father and Patriarch of Jerusalem Theophilos with co-celebrants Archbishops of the Patriarchate and those visiting from the Church of Greece, the Most Reverend Metropolitan Theologos of Serres, who also gave a Sermon in Greek, the Most Reverend Metropolitan Panteleimon of Maronia and Komotini and the Most Reverend Metropolitan Cyril of Erythra of the Ecumenical Patriarchate, at the singing of the Choir Leader of the All-holy Church of the Resurrection Archimandrite Aristovoulos in Greek, Arabic, Russian and Romanian; present were the Consul General of Greece in Jerusalem Mr. Christos Sophianopoulos and a great crowd of Orthodox people from Greece, Russia, Romania, Israel and Cyprus, who participated in prayer in much contrition and reverence.

After the end of the Lamentations, the Evlogitaria, Praises and Doxology were sung and the Epitaph with the icon of the Dormition of Theotokos was carried to the door of the Church where His Beatitude offered a special prayer.

Finally the Epitaph was placed again at the Platytera area for the continuation of its veneration by the faithful.

After the service the Hegoumen Most Reverend Archbishop Dorotheos of Avela offered a reception of cool water, fruit and sweets at the Hegoumeneion.
From Secretariat-General