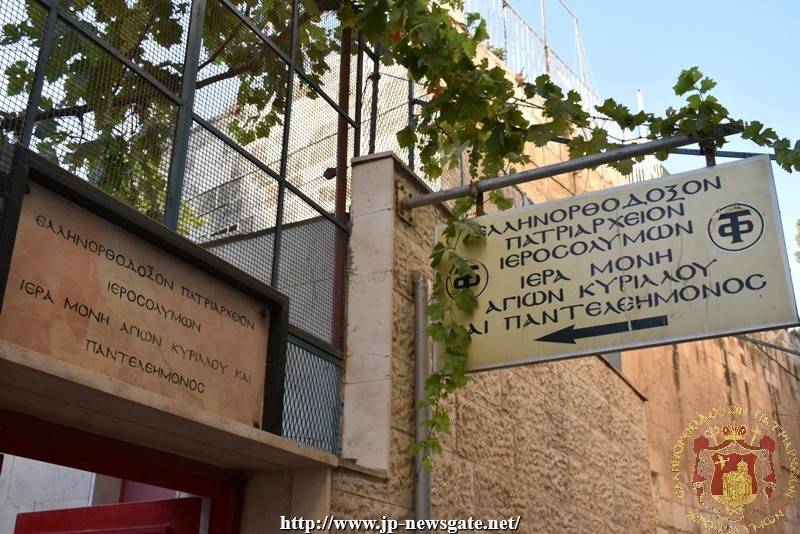 THE FEAST OF ST. JOHN THE NEW CHOZEVITE

On Thursday, 28th July / 10th August 2017, the Patriarchate celebrated the memory of our Father among the Saints John the New Chozevite, from Romania, at the Holy Monastery of the Saints George and John the Chozevites, where he lived in ascesis and slept in the Lord.

This Saint was canonized by the Jerusalem Patriarchate in the year of our salvation 2015.

At the Holy Monastery of his repentance, and for his honour, the Vigil was officiated by His Beatitude our Father and Patriarch of Jerusalem Theophilos, starting in the evening and finishing with the Divine Liturgy at dawn on Thursday.

Commencing the Vigil, the Hegoumen Fr. Constantine addressed His Beatitude as follows:

“Let us honour the ascetic of the caves of Chorath,

With your Reverend Entourage

Amidst the summer heat with the high temperatures, amidst the burning hot rocks and flaming dunes, the feast of St. John the New Chozevite is an oasis of dewiness! He is precisely depicted by St. Barsanoufrios, one of the great ascetics of the 6th century who writes:

“Just as the Lord did with the first ones [His Apostles]…likewise He can work through the present ones [His Saints] …because I know of a servant of God in our generation, of our time and in this blessed place, who can resurrect people from the dead in the name of our Master Jesus Christ and expel demons, and cures incurable diseases and works other miracles… Because the ship has slurred over the storm, similarly the soldier the wars, the captain has mastered the bad weather, the farmer the disastrous weather, the merchant has escaped the thieves and the monk has been perfected in solitude…” (Philokalia p.390).

We take this opportunity to thank You from the depths of our hearts for the evident affection and Fatherly love towards the Historic Lavra of Chozeva, because – through Your lively care and co-ordinated actions of Your Beatitude – our greatly afflicted Monastery for two years due to the lack of water, has recently been connected with the Water Company “Mekorot”. We earnestly and with no exception thank all relevant bodies who worked and toiled in the desert of Judea for the provision of the precious water, which has literally refreshed us! According to the Scripture:“anyone who gives you a cup of water in my name…will certainly not lose their reward” (Mark 9:41-42).

As your grateful Sons,

“Most Reverend Hegoumen of this Holy Monastery Father Constantine,

The scent of the spiritual fragrance of this Holy place of Chozeva has gathered us all in the spiritual oasis of Chorath brook in order to honour the classified among the chorea of the saints John the New, who comes from Romania.

The honour of the memory of the saints of Christ’s Church is the least offering of the immeasurable philanthropy and gift of the Trinitarian God to us the humble and unworthy ministers of His and to all the Congregation.

And we say this because the saints and holy people of our Church, the servants of Christ, are the luminaries who guide us in the midst of the rough ocean and the darkness into safe harbours, into harbours of salvation, harbours filled with the irreproachable light of the transfiguration of our Saviour Christ.

This irreproachable light is neither immaterial nor solar, but it is the light that shines through the incorruptible relics of the saints. The saints, who, having become  of one accord and of the same blood of the crucified and incarnate through the Theotokos Virgin Mar,y God the Word, Christ, witness and confess the glory of the true God.  They witness and confess the greatness of creation; while at the same time they preach that the enemy of man, namely the power of the devil, has been conquered by the resurrection from the dead of our Saviour Christ. All saints – among whom is our Father John – have  been buried into Christ’s death, but they have also risen into Christ’s resurrection.

Let us therefore in fear of God but also in faith, come to our Holy Father John who has invited us the unworthy ones, in order to celebrate his feast and glorify the One who has glorified His saints. Amen.”

The Holy Vigil followed with co-celebrants the Most Reverend Archbishop Aristarchos of Constantina and the Most Reverend Metropolitan Joachim of Helenoupolis, Hagiotaphite Hieromonks, at the singing of three Byzantine Choir singers from Greece, with the participation of a Congregation from Greece, Russia, Romania and Arab-speaking Priests.

To those present, His Beatitude preached the divine word as follows:

“To the saints that are in the earth, and to the excellent, in whom is all my delight.”[The Lord has made His saints worthy to be admired on earth and all His pleasing is found in them], Prophet David says (Psalm 16:3).

Noble pilgrims of the Holy Monastery of Chozeva

The splendid engraving of the Hagiotaphitic land of Palestine, Saint John the New, has gathered us all in his hermitage in order to celebrate his annual memory.

Our Father among the Saints John is indeed a splendid engraving, because in a wondrous manner, the corruptible man is clad incorruptibility and the earthly man becomes heavenly. This is perpendicularly witnessed by his sacred and incorruptible relics which are fragrant with “an odour of a sweet smell, a sacrifice acceptable, well-pleasing to God” (Phil.4:18), and to us, who worship him in faith, they offer “gifts of healing” (1 Cor. 12:9).

Let us also hear St. Paul saying: “For our conversation is in heaven; from whence also we look for the Saviour, the Lord Jesus Christ: Who shall change our vile body, that it may be fashioned like unto his glorious body, according to the working whereby he is able even to subdue all things unto himself” (Phil. 3:20-21).

Commenting on these words of Paul: “Who shall change our vile body, that it may be fashioned like unto his [Christ’s] glorious body” (Phil. 3:21), Zigavinos says; “Transformation… the change from the corruptible into incorruptibility and from the inglorious into glorious”. While Theodoritos Kyrou says: “He has said that our body will be of the same form of His [Christ’s] glory, not according to the quantity of glory but according to the quality. For it is also luminous.”

It is precisely this transformation of the body, namely the change from the corruptible into incorruptibility, what our Father among the Saints John managed to achieve through his ascetic striving, by the strength, of course, and the work of Christ. In other words, St. John presented himself a perfect man in Jesus Christ (Col. 1:28), according to the council and the teaching of the wise Paul who says: those who are indeed of Christ have mortified the man of flesh together with the passions and its desires. “And they that are Christ’s have crucified the flesh with the affections and lusts” (Gal. 5:24).

To this cause is that our Holy and God-bearer Father John calls us all, who honour his memory, “that we might be partakers of the holiness of God” (Hebrews 12:10). And for this: “Because it is written, Be ye holy; for I am holy” (1 Peter 1:16) says the Lord.

To the question, how do the saints partake of the holiness of God? St. Gregory Palamas urges us to hear St. Basil the Great saying: “ Just like the iron that is in the fire does not lose the properties of the iron, but having become aflame with the strongest connection with the fire and having received all of the fire’s nature, is transformed inside the fire according to the colour and the energy, likewise, the holy powers through the communion with the One who is by nature holy acquire holiness, which penetrates all their hypostasis and becomes identical to their nature. The difference of the Saints from the Holy Spirit is that while It is Holy by nature, they [the saints] become holy by participation” (G.F.Ch.Against Eunomios 3 vol.10).

Today’s festal memory of our Father among the Saints John the New, who has also become a descendant of the saints on the holy earth, namely the Orthodox Church in general, and of the saints who lived in the cave of the Chozeva monastery by the Chorath brook in particular. He bears an undeniable living witness that our Lord God lives, Who for our salvation became incarnate through the Theotokos Virgin Mary and was baptized by St. John the Forerunner in the river Jordan by the power of the Holy Spirit, our Lord Jesus Christ. For to Him belongs all glory, together with the Son and the Holy Spirit, now and forever, and unto the ages of ages. Amen.”

The Divine Liturgy was followed by a monastic meal, offered by the renovator and Hegoumen of the Monastery Archimandrite Constantine and his entourage.