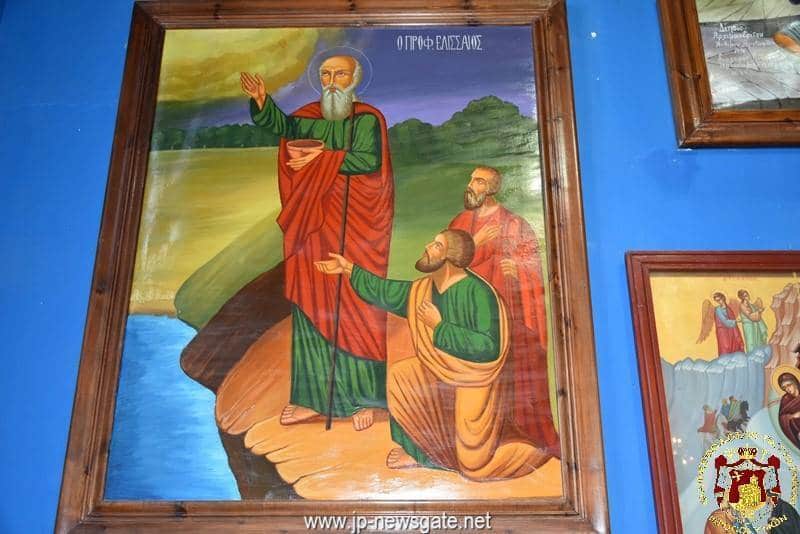 THE FEAST OF HOLY PROPHET ELISHA AT THE PATRIARCHATE (2017)

On Tuesday, 14th/27th June 2017, the Patriarchate celebrated the memory of the Holy Prophet Elisha at the Holy Monastery named after him in Jericho, where Zacchaeus’ sycamore tree stands. The Holy Prophet Elisha was Prophet Elijah’s student, and he was called to the order of the Prophets by God, while he was plowing with twelve pairs of oxen, he responded to God’s invitation and sacrificed his oxen, offered them as food to the people and followed Prophet Elijah.

The area of his life and mission was Jericho, where by God’s help he worked many miracles for the help of the people. One of these was the turning of the water of the spring by Sarantarion mount in Jericho from bitter to sweet, so that its drinking would not be deadly.

Prophet Elisha was deemed worthy to see his teacher, Prophet Elisha, ascending into Heaven in a fiery chariot, and received by him a double measure of his teacher’s grace, and his mantle, which having placed on top of the water of river Jordan he walked on the water and crossed the river.

For the memory of Prophet Elisha, the Divine Liturgy was celebrated at the aforementioned Holy Church. It was led by H.H.B. our Father and Patriarch of Jerusalem Theophilos, with concelebrants the Most Reverend Archbishop Aristarchos of Constantina, and the Most Reverend Metropolitan Joachim of Helenoupolis, Hagiotaphite Hieromonks of the Patriarchate and the Hegoumen of the neighbouring Holy Monastery of St. Gerasimos of the Jordan Archimandrite Chrysostom, the Hegoumen of the Holy Monastery of the Shepherds Archimandrite Ignatios and Archdeacon Marc, at the singing of Archimandrite Demetrios Kavathas on the right in Greek and the choir singer of the Church on the left in Arabic, with the participation of the parish congregation of the Arab-speaking Orthodox Community of Jericho, monks and nuns from Jerusalem and pilgrims.

His Beatitude preached the Divine Word to this noble congregation as follows:

“Plainly informed by a divinely inspired oracle, the wondrous Elias anointed thee a prophet, O glorious Elisseus. In thee the bounteous grace of the Holy Spirit found rest and came to dwell, O celebrated Elisseus” the hymn writer of the Church proclaims.

The grace of the Holy Spirit which finds rest and abides in abundance in the righteous man of God, namely Prophet Elisha, has gathered us all in this hagiographic (Biblical) place of Jericho and the Jordan river district, in order to praise his festal memory as the wise Solomon says: “The memory of the just is blessed; Blessings are upon the head of the just” (Proverbs 10:6,7). “When the righteous are in authority, the people rejoice” (Proverbs 29:2).

This just man, Elisha, did the exquisite among the prophets Elijah anoint a prophet by the inspiration of the Holy Spirit. And Elisha received the prophetic gift because he was distinguished for the cleanness of his heart and his manner of living was equal to that of the angles as the hymn writer says: “Rejoice, O Elisseus, who while on earth hast shown an example of a life equal to the Angels and while in the flesh hast lived without a peer.” This is also widely shown as he received a double measure of grace by the Holy Spirit according to the witness about him in the Holy Bible: “And it came to pass, when they were gone over, that Elijah said unto Elisha, Ask what I shall do for thee, before I be taken away from thee. And Elisha said, I pray thee, let a double portion of thy spirit be upon me….And he said… it shall be so unto thee” (4 Kings 2:9-10).

The double measure of the grace of the Holy Spirit that was given to him is shown in his prophetic ability and action, which coincides with unexpected works and various miracles, such as the healing of the leper Naaman the Syrian. This miracle is also recalled by our Lord Jesus Christ during His preaching, as Luke the Evangelist witnesses: “And many lepers were in Israel in the time of Eliseus the prophet; and none of them was cleansed, saving Naaman the Syrian” (Luke 4:27).

Moreover, this historic town of Jericho is an irrefutable witness of Prophet Elisha’s miracles, who healed “the bitter water” at the fervent asking of the town’s citizens (4 Kings 2:19), namely the water that was unhealthy and deadly: “The people of the city said to Elisha, “Look, our lord, this town is well situated, as you can see, but the water is bad and the land is unproductive”…

Then he went out to the spring and threw the salt into it, saying, “This is what the Lord says: ‘I have healed this water. Never again will it cause death or make the land unproductive.’”  And the water has remained pure to this day, according to the word Elisha had spoken” (4 Kings 2:19-22).

The Holy Church of Christ honours especially Prophet Elisha, because not only did he work beneficiary miracles by the power that was given to him by God, but also worked miracles against evil and avarice, namely voracity and the social disorder or corruption in general. And he did these, motivated by philanthropy and love towards his neighbour.

Today’s celebrated marvelous Prophet Elisha was distinguished as a Saint of the Church for his virtue. And the one who praises the righteous man, praises virtue itself. And this is so, because the righteous men of God by their example “proclaim the virtues of the One who summoned us from darkness, namely of Christ, to His wonderful light” (1 Peter 2:9). It is therefore imperative, my brothers, Peter the Apostle orders, to progress in virtue, because the divine power of Christ has given us all things that contribute to spiritual life and reverence. And He has given these to us through the knowledge of the true God, who has called us from the condition of sin to salvation, through His perfection and power: “His divine power has given us everything we need for a godly life through our knowledge of him who called us by his own glory and goodness” (2 Peter 1:3).

Communicant and participant of our Prophet Elisha’s virtue has also been our Father among the Saints Methodios, Archbishop of Constantinople, who is co-celebrated with him today.

This Holy Church Father inverted the fallacy of heresies and the iconoclasts, defending the Orthodox faith and teaching by his divine word.

The divine and virtuous life of Prophet Elisha as well as of our Father Methodios deemed them worthy of the vision of God’s glory, namely the incorruptibility of their holy relics which witness the resurrection of our Saviour Christ, but also the incarnation of God the Word through the pure blood of the Ever-Virgin and Most-Blessed our Lady Theotokos Maria.

Boasting over the Saints of our God and Saviour Christ, we cry out with the hymn writer and say:“Thou who wast once a ploughman wast made a Prophet of the Lord; and with Elias’ mantle, his spirit twofold didst thou gain. Wherefore, O great Elisseus, with him we honour and praise thee.”

“Thou like the sun didst rise from the East, O Father, and settest in the West in thy holy contest, righteous and supremely wise Methodius; and with thy doctrines’ shining beams thou hast enlightened the whole world. Pray for us all, O God-bearer.” Amen.”

For the Sermon in Arabic please follow the link below:

After the Divine Liturgy, the Hegoumen of the Holy Monastery Archimandrite Philoumenos, who has overcome his illness by the grace of God and Prophet Elisha, offered a reception to the Patriarchal Entourage and the Congregation, while at noon, the Community and the Hegoumen offered a meal.

During the meal, Mrs Nahinda Halte, member of the Jericho Community,  addressed His Beatitude in Arabic ( the link will be posted in due course).