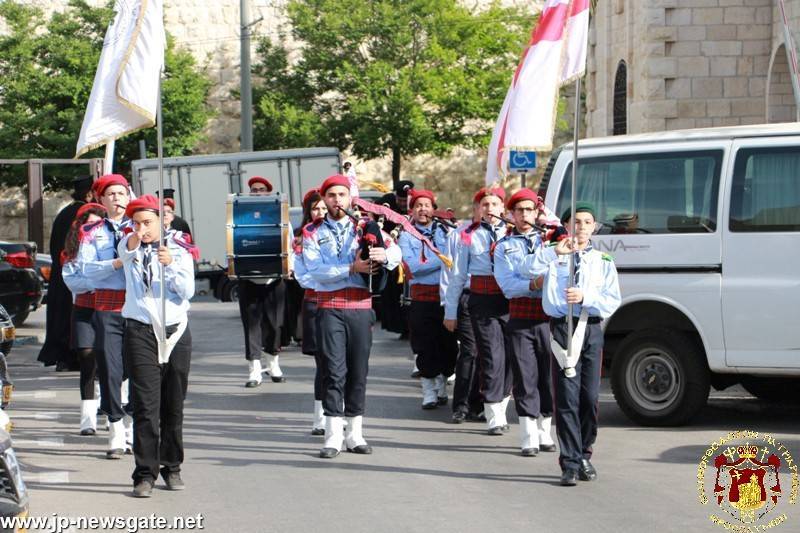 On Thursday afternoon, 5th/18th May 2017, the graduation ceremony of the Patriarchate’s St. Demetrios School graduates took place at the Notre Dame Hotel reception hall, by the New Gate.

The ceremony honoured with His presence H.H.B. our Father and Patriarch of Jerusalem Theophilos, the Patriarchal Commissioner Most Reverend Metropolitan Isychios of Kapitolias, Geronda Secretary-General Most Reverend Archbishop Aristarchos of Constantina, Dragouman and Chairman of the Arab-speaking Schools Board of the Patriarchate Archimandrite Mattheos, the Consul Mr. Vassilios Koenis, Mr. Fanti Abdelnour, member of the Educational Commission, the author of the book “I am Jerusalem” Dr. John Tleel, an elderly and honoured member of the Greek Community, Vestry men and members of the Greek Orthodox Arab congregation, such as Mrs. Noura Kort and Mr. Ibrahim Salfiti and Mr. Nabil Metzali and others, as well as the parents and relatives of the eleven graduates at the School of the twenty nine years of function.

This well organized ceremony by the thoroughness of the School Manager Mr. Samir Zananiri and his associate teachers and the graduates, included the welcoming of H.H.B. and His Entourage by Scouts at the Hotel entrance and then at the reception hall.

The ceremony continued with the prayer  “Christ is risen” and the reciting of the Palestinian and Greek National emblems, and the Hymn of the School. The address of the School Manager Mr. Samir Zanariri followed. In it, he thanked His Beatitude for His support to the School, the former Chairman of the School Board Archimandrite Ieronymos and the present Chairman Archimandrite Mattheos. At the end of his address, Mr. Zananiri offered His Beatitude a painting of the recently renovated Edicule of the Holy Sepulchre, a project completed under the supervision and by the actions of His Beatitude.

The ceremony also included Palestinian traditional dances and songs, as well as snapshots on screen of the graduates’ school life. Important were also the addresses of the graduates, one in Arabic, one in English and one in Greek. In them, the graduates’ representatives, emotional by their School leaving after twelve years, thanked the Patriarchate, the School Manager, their teachers and parents for their care in the graduates’ upbringing and education for twelve years until they reached this point of their opening to the future, in their life in Society.

The above mentioned activities of the teachers and students were met with His Beatitude’s address, read by Fr. Issa Mousleh, the M.M. representative of the Patriarchate in Arabic (to view, visit the Arabic version of the site).

The addresses were followed by the awarding of the School leaving Certificates of the graduates by His Beatitude, Fr. Mattheos and the School Manager to each one of the graduates, with the wish to succeed in their university entrance exams and have a successful career in their lives.