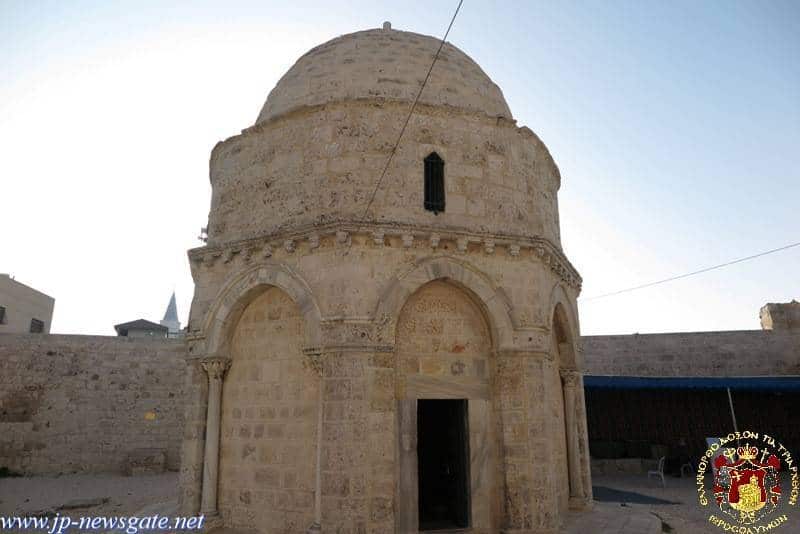 LAZARUS SATURDAY AT THE MOUNT OF OLIVES

On Saturday, 26th March/8th April 2017, Lazarus Saturday was celebrated by the Patriarchate at the south-east top of the Mount of Olives, in memory of the resurrection of Christ’s friend Lazarus, who was dead for four days.

The Lord resurrected Lazarus who was buried for four days, and escorted him from his tomb to his home town Bethany, sympathizing to the point of tears with our death, due to our fall, and thus confirming the common Resurrection of all people in His glorious second coming.

This event was celebrated at the above mentioned place by the Patriarchate according to the Typikon rules of worship, at the special place of the Byzantine Church ruins, for centuries occupied by the Ottomans, present Muslims, where they keep a Mosque.

At the recently renovated Holy Altar and more recently vandalized and then sanctified by the prayer of the Holy Altar, Vespers was held in the evening and the Divine Liturgy in the morning, led by the Most Reverend Metropolitan Joachim of Helenoupolis, with concelebrants Hagiotaphite Hieromonks, Arab-speaking Priests of St. James the Brother of God Cathedral, and deacons, at the singing of Archimandrite Aristovoulos with the novices of the Patriarchal School on the right, and the choir of the St. James Cathedral under Mr. Rimon Kamar on the left, with the participation of faithful from Jerusalem and the pilgrims who have arrived for the Feast of Pascha from Greece, Russia, Ukraine, Romania and Cyprus.

At the end of the Divine Liturgy at the Mount of Olives, many of the Priests and the pilgrims went to Bethany to participate to the feast there as well.

The good keeper of the Nunnery opposite the Ascension Shrine Monk Ahillios offered a reception to the Episcopal entourage and the pilgrims.