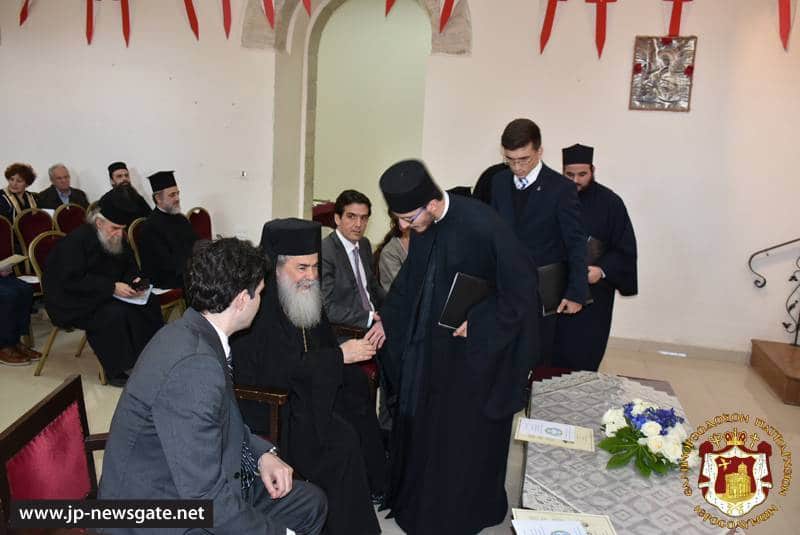 THE SCHOOL CELEBRATION OF 25TH MARCH 1821 AT HOLY ZION SCHOOL

The celebration ceremony for the anniversary of 25th March 1821, was transferred on Monday afternoon 14th/27th March 2017, at the Patriarchal School of Zion.

The ceremony was honoured by the presence of H.H.B. our Father and Patriarch of Jerusalem Theophilos together with Hagiotaphite Fathers, Geronda Secretary-General Most Reverend Archbishop Aristarchos of Constantina, the Chairman of the School Board Elder Sacristan Most Reverend Archbishop Isidoros of Hierapolis, the member of the School Board Dragouman Archimandrite Mattheos, at the presence of His Excellency the Consul General of Greece in Jerusalem Mr. Christos Sophianopoulos, Consul Mr. Koenis, members of the Greek Consulate, Hagiotaphite Fathers and members of the Greek Community.

At this humble ceremony the School students presented the feast with an introductory speech by the School Director Mr. Souliotis, patriotic songs, parts of plays related to the feast, the festal speech of the day by the teacher of the School Reverend Hieromonk from St. Savvas’ Monastery Fr. Euphrosynos, while intermitted documentaries were displayed on screen.

With all the above, the students made the audience recall the sufferings of our nation by the Turkish occupation and the fall of Constantinople in the year 1453, with the following persecutions, exiles, imprisonments and enslavement until the year 1821, when the Greek Revolution began led by Palaion Patron Germanos. This was followed by the unparalleled brave fights of our fathers from Soulion, Messologi, those of Papaflessas, Kolokotronis and others, until the liberation in 1832, when the Greek Country was proclaimed to be free again.

For the evoked to the audience feelings of national pride, His Beatitude and the Consul General congratulated the acting students, the School teachers and the School Director Mr. Souliotis, and wished them all the best for the continuation of their educational work.