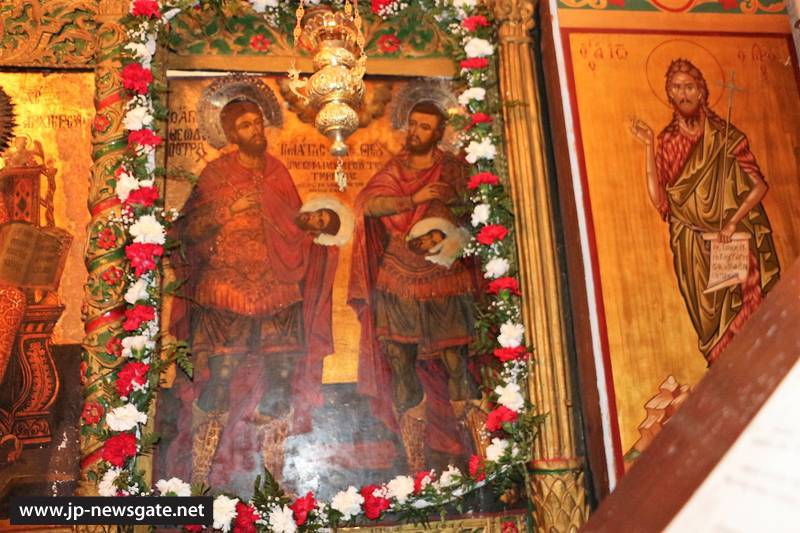 THE FEAST OF THE BOILED WHEAT MIRACLE AT THE PATRIARCHATE

On Saturday of the first week of Great Lent, the memory of the miracle of the boiled wheat by St. Theodore Tyron the Great Martyr was celebrated by the Patriarchate at the Holy Monastery dedicated to him, which is on the west side of the Patriarchate towards the New Gate, inside the Wall of the Old City of Jerusalem.

Saint Theodore Tyron was so named due to his military office (Latin tiro-nis) which means “rookie soldier” and he martyred in 297 A.D. He worked the above mentioned miracle by appearing in a dream to Archbishop Eudoxios of Constantinople and warned him that Julian the Apostate -Constandios’ successor, (Constantine the Great’s son), and persecutor of the Christians – had attempted to contaminate the foods in the Christian food market by mixing them with foods from sacrifices to idols. In order for this not to happen, he advised the Archbishop that they should eat “kollyva” which is boiled wheat that they used in the Saint’s hometown Euhaeta.

The Archbishop acted according to the Saint’s advise to all areas inhabited by Christians, who were fed with boiled wheat during the first week of Great Lent and were not contaminated.

Since then, it has become customary to use boiled wheat to the Saint’s honour on the Saturday of the first week of Great Lent.

The Services of this Feast were led by the Most Reverend Archbishop Makarios of Qatar, with Vespers in the evening and the Divine Liturgy on the day of the Feast, with concelebrants Priests and Hieromonks. Participants were the congregation of monks, nuns and laity, as well as members of the Greek community and the Arab speaking faithful of the Patriarchate.

To this noble congregation the officiating Archbishop preached the Divine word, underlining the need for an unmixed and pure faith towards God, just like the faith of St. Theodore.

During the Divine Liturgy, H.H.B. our Father and Patriarch of Jerusalem Theophilos with Hagiotaphite Fathers came to venerate.

After the Divine Liturgy, the Hegoumen Archimandrite Alexios who is also the Typikon Keeper, offered a reception to the Episcopal Entourage and the congregation at the hegoumeneion.